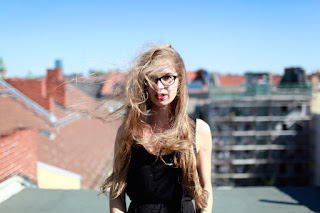 Luckless, aka Ivy Rossiter, is a New Zealand artist currently residing in Berlin. To date she's released two albums, a self-titled debut and 2014's Vindication Blues. Touring constantly, she's returning to the UK this week for a series of shows including a return to Manchester, where she plays Gullivers on Saturday, just over a year after she stunned a packed basement at Cord as part of A Carefully Planned Festival.  We caught up with Ivy about her recollections of that and her plans for new material.

Hi Ivy, thanks for agreeing to have a chat with us before your UK tour. It's your first visit this year, are you looking forward to coming back?

I am ecstatic to be coming back; I actually don’t know why I haven’t been back sooner!  Not only do I get to experience some new venues I’ve never been to and make new friends, I get to come back to some of my favourite cities - Manchester especially.

You play Gullivers in Manchester on November 12th after playing A Carefully Planned Festival last year. What are your memories of playing that show?

A Carefully Planned Festival was one of my favourite experiences last year.  The team that put it on are so friendly, so kind, and so very well organised!  I got to meet a bunch of amazing other artists, and I remember the audience being incredibly open minded and receptive to what I did.  The basement in Cord was so packed, I was completely charmed by the experience.

It's a couple of years since you released your last album Vindication Blues. Have you been working on new material, and if so, can we expect to hear some of it on this tour?

I’ve been touring new material for the past couple of months, so a good portion of my set will be new to anyone at the show.  I’ve been quietly plotting how I’m going to make the next record, and I suspect that it will be largely a self-made affair.  I’ll be drawing on some of the skills I started developing with the track ‘No Civil War’ (released last year on my Bandcamp, as a fundraiser for Medecins Sans Frontieres.)  That track stretched my recording abilities, but I still have a lot to learn in the process of making my own full record.

And can we expect some new releases in 2017?

I can’t wait to release some new things out into the world.  I hope to complete and release an album in 2017 - or at the very least, complete a full record and have a couple of singles floating around the internet next year.  There’s a lot to do, but I’m feeling hopeful that I can accomplish it.

You're currently based in Berlin. How is the creative scene there and does it feel like home?

Berlin takes a while to get used to - it’s like a new pair of boots.  I’ve loved it from the beginning, but now I feel I’m starting to carve out my own space there.  I’ve met some incredibly creative and inspirational friends, who are challenging me to develop new skills and push my projects further along.  I’ve also started a couple of new collaborative projects, which is a brand new experience for me.  The city is so diverse and full of potential experiences - sometimes I have to hide myself away from the buzz so that I can get some work done… or get some sleep.

I’m not sure though if it feels like home yet - but it certainly feels like the place I want to be.

If people are curious about your music but haven't heard any of your songs, how would you describe it to them?

Reflective, often melancholic but atmospheric songwriting, with layers of guitars and a touch of pathos. But perhaps people might prefer other artist references:  PJ Harvey, The Kills, Beth Gibbons, Frightened Rabbit...