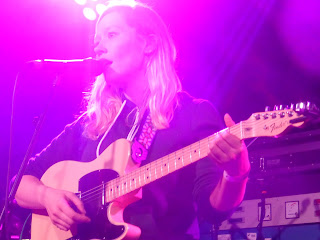 Julia Jacklin has been one of the discoveries of 2016. Her debut album Don't Let The Kids Win is a soul bearing stirring record that lays emotions and feelings bare. We caught Julia's first ever Manchester show supporting Whitney at Gorilla to see how the songs translated to the live environment.

Julia's accompanied by a three piece band of Harry on bass, Eddie on guitar and Tom on drums and backing vocals and what they do so well is to provide the framework for Julia to tell her stories to an audience that starts off typically indifferent to a support act with the usual chatter but who by the end are listening in awestruck reverence to her beautifully simple emotive voice that is living and breathing every word of these songs.

She opens with Hay Plain, the first of eight songs she plays, all from Don't Let The Kids Win, as she muses "wondering if my new man is in love with me yet", love or loss of it being a theme that runs through most of her set. She's still working on her between song chat with the audience but it feels like the warmth of the response she gets combined with the camaraderie on stage brings her out of her shell. She jokes about the video for Pool Party being for people who like dancing and keep fit because it features her and Tom doing just that.

She chooses her set well too, the more upbeat moments such as Coming Of Age and the humourous Small Talk interspersing with the solo LA Dream and the beautiful showstopping title track of the album that closes her set. The place is full by the time she's done and it's the best response we've heard for a support band in here for a long time.

She's returning to play her own show at Soup Kitchen on February 23, but on this showing she should be back in here, or bigger, headlining in her own right as more people fall for the simple irresistible beauty of Don't Let The Kids Win.

Our review of Don't Let The Kids Win can be found here.