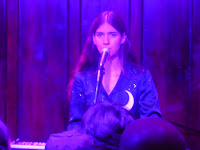 With the critical success of recent album Front Row Seat To Earth still ringing in her ears, Natalie Mering brought Weyes Blood to a packed out sweltering Castle music room in Manchester for a ten song set that focused heavily on that record but also gave a glimpse of her previous work.

"We're going to do some jams" announces Natalie once the welcoming cheers subside. Whilst the songs themselves could hardly be described as such, putting a monicker on this mix of keys, drums, acoustic and electric guitar is a bit of a moving target such is the fluidity with which she and her band change instruments and approach. Seven of the ten songs come from Front Row and two that don't - Hang On and Bad Magic from 2014's debut album The Innocents - have the same loose structures live that allow the band to expand on the fixed format of the recorded medium. The result is an intoxicating haunting sound that fills the room without ever relying on volume alone and doesn't let us drop our attention for a moment. 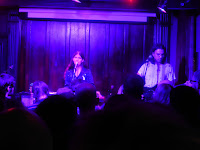 The sauna like conditions don't go unnoticed, Natalie commenting at one point that there's water dripping from the ceiling. But these conditions just add to the unnerving effect that the music has on us. A cover of The Soft Machine's A Certain Kind as the encore feels somewhat appropriate. There's an intensity to the performance and the delivery of every song, and Generation Why and Seven Words in particular, that feels like we're being party to revelatory moments in the songs.

Natalie tells us that this is her first visit to Manchester for ten years when she last played a gig in a pool hall, but on the basis of the sold out signs being up on this gig weeks in advance it shouldn't be that long until she returns.