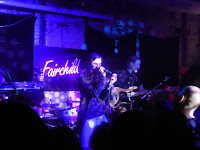 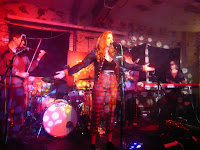 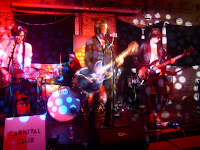 This is Fairchild's last gig for a while in their adopted hometown of Manchester as they move onto pastures new. Soup Kitchen is packed to the point it's almost impossible to move, but two hundred or so answer the call of dance that Fairchild's big 80s tinged rock sends so clearly from the stage. Support came from two of the most impressive bands on the local scene at the moment - Young Monarch and Carnival Club.

This is the first time we've seen Carnival Club, but their reputation has preceded them with lots of people we trust tipping them for bigger things and we have to say we're not disappointed at all by an energetic vibrant set that's impressive for how it is one moment a full on aural assault before turning into something more melodic and soothing the next with front man Kai Jon playing the rock star band leader to a tee.

They play songs from a debut EP that's due out in February that promises to lay down a marker for them. You're So Hostile, Magdalena's Hat and recent single House Of Cards in particular stand out, but it's their final song, being played for the first time, called Cecilia that really grabs the attention. A little more restrained than what's gone before, it allows their guitarist Eddie to really come into his own and demonstrate he's a force to be reckoned with. On the basis of this show, Carnival Club are a band you're going to hear a whole lot more from in 2017. 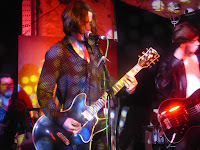 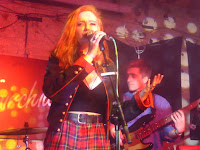 Next up are Young Monarch and whilst the contrast in styles between the two bands couldn't be more different, the impact is exactly the same. Fronted by the flame-haired Rebecca, they deliver a set that's built on a songwriting ethic and craft that walks a line between the bands you'd find on bills like this and bona fide pop stars. There's violin and sax in the mix and a drummer who is frankly insane in the intensity of his performance.  But it's Rebecca where the real star quality in the band lies, a voice with range and depth to it and an ability to adjust it according to the pace and needs of the songs. She's not even put off by the bearded gobshite stood six feet away from her who voices his opinion on everything loudly as the set progresses.

The stand out songs for us are recent single Gold and a new one that they don't tell us the title of. There's an ongoing drama in the songs, whether it be which musical turn they're going to take next or which direction Rebecca's voice is going to soar or swoop. It's rare for a band to be so sonically ambitious in what they're doing, yet have such immediate hooks in their songs, but Young Monarch achieve both and do it with a style that will stand them in good stead.

Fairchild are here to party and party hard. The six of them fill the tiny Soup Kitchen stage although their front man Adam seems to spend half his time amongst us in the audience, challenging us to get involved and party with them. It's hard not to get caught up in the rippling rhythms and big choruses that mark out most of their songs - new single Start Again and its predecessor Neighbourhood being cases in point, but the rule rather than the exception. They reveal that they've recently completed an album although admit that they don't know yet how they're going to release it, but songs like Dancer and a new song called High As A Kite that gets its first airing tonight show that it's going to be choc full of those big electronic anthems that have won them so many admirers not just here, but back home in Australia and around the world. 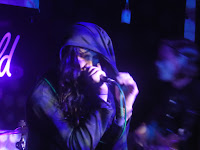 Adam is on fine form, encouraging everyone to dance with the person stood next to them, worrying about whether he's stood on a guy's toes by dancing close up with a girl stood next to him and somehow not needing oxygen after his exertions. They overcome technical difficulties that seem to plague them throughout without being thrown off their stride. They finish with Adam departing after calling his brother (and band manager) Rhys on to stage to sing Childish Gambino's Heartbeat - a real sign of the love that this band of brothers and mates bring to their music. Manchester will be a poorer place without them, but we have no doubt they'll be back soon enough.