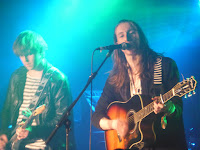 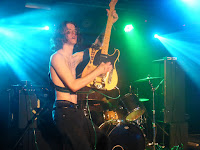 Clint Boon's inaugural Set2Go podcast saw eleven great acts grace the stage over two floors at Sound Control on Sunday night. The two final acts Saytr Play and The Blinders rounded off the evening upstairs in the loft, two very different bands that thrilled a crowd at the end of a long day of great music.

Saytr Play have been in the studio recently recording their debut album and even in the few months since we last saw them, they've developed into an exciting band that knows exactly how to have a crowd eating out of the palm of their hand. In Fred Farrell they have a front man in the rabble rousing mode of Miles Hunt when The Wonder Stuff were at their most relevant and what they deliver musically has somewhat of the same impact, albeit brought thoroughly up to date. You don't need to know their songs because you'll be tapping your feet by the first chorus and singing along by the final one.

That's a tough act to pull off without descending into cheese but it's one they manage effortlessly. The likes of We Should've Been and recent single Don't Go East stand out in particular and when Fred climbs over the barrier and gathers us round him to join in, you just know they've won over a whole new army of friends.

Doncaster's The Blinders are a completely different proposition entirely. We'd seen them play a month or so ago to about ten people at The Star And Garter and didn't get the building hype around them, but they blow all that away from the minute they walk on stage, mouths covered in gaffer tape and Tom, shirtless, wearing an animal mask. They strike up into their opening song (we think it was called Brutus) and it's immediately clear they're a force to be reckoned with. When he's not rolling around on the floor singing into a discarded microphone Tom's delivering impassioned songs about how society and politics are screwing people over with talk of broken shadows in Westminster and building Berlin walls set to a blisteringly loud soundtrack that belies the fact he's only accompaniments are bassist Charlie and Matt on drums.

What serves The Blinders so well though is the way in which they channel their anger and aggression. At points it feels a little theatrical, but it's absolutely genuine as well, real anger mixed with the primal essence of the best rock music. By the end of their half hour set, and an impromptu encore demanded by Clint and the raucous crowd, they've won us over. They might lack the bonkers element to Cabbage, but their message that the North is rising again, as evidenced in their debut single Swine that declares "there is no hope", and using music as one of its weapons is equally loud and clear.

From all reports of those there all day, the other artists (Ryan Jarvis, Tourist Attractions, Maruja, Liam McClair, Matter Of Mind, The Jade Assembly, Jess Kemp, No Hot Ashes and Ist Ist) all left a similarly positive impression on a day that both proved that live music is very much alive and kicking as well as encouraging kids to come, listen and pick up a guitar by dint of their all ages policy. We look forward to the next one.

Email ThisBlogThis!Share to TwitterShare to FacebookShare to Pinterest
Labels: Saytr Play, The Blinders