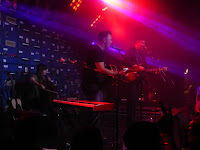 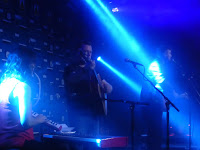 Across the road from Gorilla, Reverend And The Makers have a habit of making the legendary bouncy dancefloor resemble a trampoline from start to finish of their customary tour stop off. Tonight is a different beast altogether though as they embark on an acoustic tour that strips back some of their best known songs as well as some of their favourites to their bare bones. It doesn't stop Gorilla heaving, sweating and at times drowning them out in a room full of love and adoration.

"This acoustic thing is meant to be civilised, fuck that" shouts Rev before he and sidekick Ed launch into Heavyweight Champion Of The World. As happens so much during the course of the evening, they're almost drowned out by the sheer volume of the audience singing back the words of most of the songs. Whilst the instruments might be turned down the fervour of the crowd's reaction certainly isn't, particularly on the big singles, which are all present and correct during the course of what Rev says is the band's longest ever concert.

There is space for them "to disappear up our own arses after twelve years" with lesser known songs such as Play Me, Long Long Time and Hard Times at which point there's relative calm, but at any point we're just minutes away from another huge singalong, whether it be early classics such as No Soap In A Dirty War, Sex With The Ex, He Said He Loved Me, Bandits and Open Your Windows or more recent songs such as Black Widow, Makin' Babies, Shine The Light and Mr Glassalfempty. 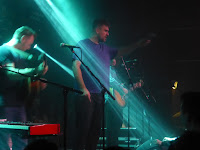 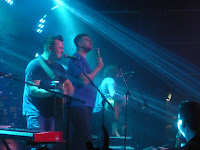 There's interchangeable personnel on stage all night too. Rev and Ed are omnipresent except for Last To Know, where Ed takes centre stage and tells us he doesn't say much because Rev is a "gobshite" while he's off stage. Laura, Rev's wife, gets the biggest cheers of the night after it's revealed as Black Widow segues into Makin' Babies that she's expecting her and Rev's second child - and she adds both melodica and keyboard parts as well as taking lead vocals on He Said He Loved Me. Joe Carnell joins for Something To Remember and Mr Glassalfempty and jumps up to add his part to a raucous Bandits that sets the crowd off and he's greeted by chants of "Milburn" recognising his recently-reformed band. A cellist called Lucy joins for a number of songs and a couple of support act Liberty Ship bound on and cover Bo Diddley's Who Do You Love mid-set.

The set finishes in Reverend And The Makers tradition with Silence Is Talking and the audience aping and drowning out Laura's trumpet and continuing to sing it well after the house lights have come back on and we're being ushered out on to the streets. It's a moment that characterises everything that they do just right - they write songs about situations and experiences that we've all been through and they couch them in tunes that are irresistibly infectious and celebratory and they've delivered them consistently from the first record through to the one song Miss Haversham that they reveal from their forthcoming album that they recorded recently in Thailand. Add to that the easy to love impossible to ignore larger than life Rev himself who's not afraid to take the piss out of himself as well as creating a feeling that we're all one with his down to earth honesty and championing of real music as opposed to the laptops of Guetta and his ilk, and it's easy to see why five hundred or so devotees hang on every word.