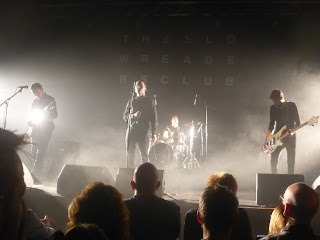 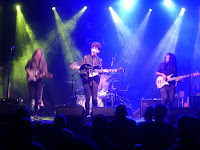 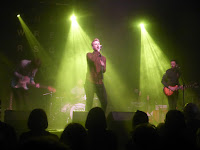 Selling out the Ritz two months in advance is no mean feat for an established touring band with major label support. The list of well-known artists that have experienced chart success without a Sold Out next to their name on the Ritz's posters is testament to what The Slow Readers Club achieved in doing just that. Fifteen hundred people crammed into the hallowed space to witness an unsigned band powered by their own pockets and their own hard work and masses of love alone deliver a night that people will talk about for years to come. Support came from Puppet Rebellion and Larkins.

Larkins open up proceedings and one day this stage may well end up being theirs. Their songs are full of infectious fluid rhythms that will set people dancing - and if any encouragement is needed Josh, Dom and Henry never stop moving.  Recent single Velvet is a particular highlight as is a new song they play for the first time called Wasted Years whilst their debut single Hit And Run still the power to immediate disarm you with its playful abandon.  They've announced their own headline show at Gorilla for February after selling out Club Academy earlier in the year and this gig feels like another step up for them. 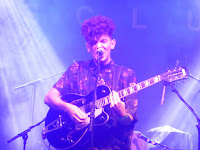 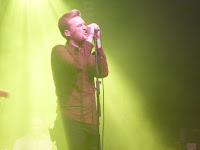 Puppet Rebellion played with The Slow Readers Club at Factory three years ago on a bill headlined by Catfish And The Bottlemen. Since then they've changed lead singer and released a number of increasingly polished EPs whilst building a fan base that tonight's set is sure to expand. They make the stage their own, guitarist Craig and bassist Jim relishing the biggest hometown stage they've had to date, whilst front man Oliver has grown into a confident assured band leader. As they leave us with early single The Greatest Lie Ever Told the reception from the now-packed Ritz tells its own story.

"Readers, readers" is the deafening cry as the crowd wait in anticipation for our heroes to take to the stage. If there's any sign of nerves in the band we don't notice them as the welcoming roar subsides and they dive straight into the title track from last year's Cavalcade. The infamous bouncing dance floor does its work and takes the load of the heaving front rows who are bellowing back every word. It's something that continues throughout the mammoth seventeen song set, culled from both Cavalcade and their self-titled debut with two new songs, Lunatic and Through The Shadows, giving us a tantalising preview of what they've got planned for their third album which we'll hopefully see next year.

What makes The Slow Readers Club such a special band, one that people take to their hearts and ears on first listen is the way the songs make a beeline for those emotions that everyone feels and often hides below a smile. There are so many parallels with James that the connection that's been made between the two bands seem perfect - the lyrics of songs like I Saw A Ghost, Days Like This Will Break Your Heart - are dark and confessional when you read them written down, but transformed into music, and at its strongest live, they become a communal exorcism of demons and a celebration that deep down we're all human beings with dark thoughts and feelings and that that is perfectly OK. 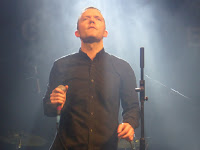 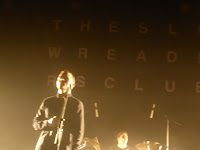 What's also evident tonight from their earliest songs such as One More Minute and Sirens through to the two new ones Lunatic and Through The Shadows is that they have a consistent sound, a very defined one that marks them out and makes it easy to fall in love with them, but at no point does it ever become repetitive as every song has its own personality and vibrancy that's different from what goes before and after. There's no big acts of showmanship although Aaron has developed into a front man with the confidence to own a room of this size whilst Jim and Kurtis ooze distanced cool as they weave their magic whilst David on drums was the final piece in the jigsaw when he joined the fold.

The band look and sound like they belong on these big stages. Even when they were playing to thirty of us in Band On The Wall just two years ago, the songs, mostly unreleased at that point, felt like they were big enough to fill rooms like this and tonight they prove that right. Down in the pit people hug complete strangers at the end of songs as we're all carried away on the emotion of a band that the city have taken to their heart having what is hopefully the first of their big moments. As I Saw A Ghost hits the first chorus a wave of white balloons are unleashed upon us and are bounced around as the song that started to really ratchet things up for them is sung back so loud that it almost drowns the band out.

As they finish with Cavalcade's final track Know The Day Will Come, they take a bow, arms round each other and Jim makes a speech thanking us, telling us that they've all got day jobs like us and that they don't have anyone backing them, every penny we spend goes straight back into the band and how much they appreciate that. But to every single band out there that's struggling to get an audience as they did for so long they're an inspiration - they've got here without a record label, without the support of the local press, who are more interested in cocktail bars and clickbait, and without massive national radio exposure (other than 6 Music). What they do have though is a great support network (including promoters Scruff Of The Neck, for whom this is also their biggest gig, who took a chance on them) and a growing social media fan base that's spreading them by the powerful tool of word of mouth.

But the most powerful weapons they have are their songs and their live set and right now they're almost untouchable in that respect.

The Slow Readers Club played Cavalcade, Fool For Your Philosophy, Sirens, Start Again, Lunatic, Days Like This Will Break Your Heart, Don't Mind, One Chance, One More Minute, Here In The Hollow, Feet On Fire, Plant The Seed, Block Out The Sun, Forever In Your Debt, Through The Shadows, I Saw A Ghost and Know The Day Will Come.