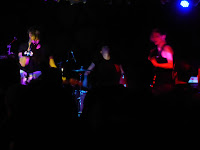 Aatma played host to LIINES' hometown launch show for their first physical release, the double A-side single Be Here / Disappear, on Saturday night. A packed crowd was delighted by a forty minute set that left both band and audience gasping for breath.

The venue's packed by the time LIINES come to the stage and it feels like that powerful tool of word of mouth is starting to pay dividends. We're here to celebrate the release of LIINES' new single, but we're also treated to a set that should hopefully form the basis of their debut album some time next year.

You'd expect a hometown crowd to be more vociferous than elsewhere, but there genuinely feels like there's a real connection between the band and the audience tonight to the point you sense the band feel slightly overwhelmed at the end by the amount of love there is in the room. People are singing along the words to every song and letting go, the lyrics are dark and an expulsion of bad experiences and dark thoughts yet it feels like they're also being celebrated, that you can come out the other side. There's no pretense either, no rock star poses or glib statements between songs - LIINES speak the only language they know which us music.

The appeal of LIINES is more than just words though; it's the ferocious jagged rhythms that Steph on bass and Leila on drums create that propel the songs along at breakneck speed then turn volte face in an opposite direction and which provide the canvas on which Zoe lets rip both with voice and vicious shards of guitar that need no special effects to feel like they're piercing straight through you. It's music in its rawest form, but it also has brilliant melodies that lurk below the surfaces and every so often force their way to the top and change the whole direction of a song.

Be Here and Disappear are a formidable combination as a double A-side single, but there's a set full here of songs of similar impact and unadultered power. Cold, Liar, Gone, Find Something, Blackout and of course their breakthrough single Never There each have a character and personality of their own but are forged from the same base materials. Direct and uncompromsing, LIINES are a band at the top of their game at the moment. Their debut album is already shaping up to be one of 2017's most formidable releases.

Read our interview with LIINES here. They finish their tour at Leeds Verve Bar on Friday (December 2).