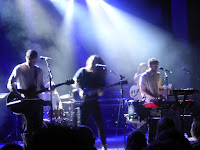 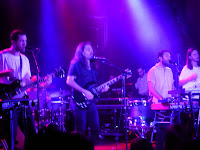 With the release of their third album Sunlit Youth, Local Natives made their return to Manchester for the first time in three years. With a set that mixed songs from the album with those from its predecessor Hummingbird and their celebrated debut Gorilla Manor, they performed an exhilirating infectious hour and a half set that touched all bases and left the crowd dancing and singing along to both old and new.

"Do you wanna dance?" asks Kelcey, one of Local Natives' rotating front men, before climbing over the barrier and joining us during Villainy, the opening track from Sunlit Youth. To be honest we need no invitation or chiding to do so, Local Natives make it impossible not to keep your feet moving and your hips swaying to their groove-laden songs. Whether they be from their 2009 debut Gorilla Manor, that doesn't feel like it's seven years old, or from their latest, the impact the songs have is the same. As Kelcey and Taylor interchange or share lead responsibilities and instruments and Ryan, Matt and Nik also demonstrate their versatility that make Local Natives such a thrilling and unpredictable live band that means they suffer none of the first album syndrome that means fans are just waiting for those big songs that made them fall in love years ago.

Those older songs do get the best response and they hark back to a time where Airplanes, Who Knows Who Cares, Wide Eyes and Sun Hands felt like they had the potential to take Local Natives to the level of Arcade Fire such was the momentum they were building at some thrilling sold out by word of mouth London shows. The new material though isn't any less vibrant - Coins, Mother Emanuel, Dark Days (where Ryan takes on the female vocal part) in particular - or exciting as the older stuff and the energy in their performance transmits itself to the crowd so there's no let up or mid-set lull. 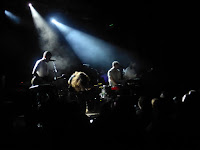 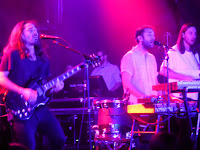 Local Natives are a band with a cause too.  They are donating £1 from every ticket sale to Women Against Violence Europe and before Fountain Of Youth, Kelcey tells us there's too much negative cyncism and we all need to positive even though we've got shit going on. Its lyric "We can do whatever we want, we can say whatever we mean and if we don't care, then who cares?" is their call to arms and feels even more pertinent the morning after.

"We won't leave it three years next time" Kelcey tells us as he introduces the last song Sun Hands, as crazy, stop start and wild as it was at those tiny shows at the Lexington and other places seven years ago, and we have to hope they stick to their word because Local Natives can still pack a punch and live unleash a tidal wave of energy that it's impossible not to be swept away on.

Local Natives played Past Lives, Wide Eyes, Villainy, You And I, Breakers, Mother Emmanuel, Airplanes, Masters, Heavy Feet, Coins, Ceilings, Dark Days, Colombia, Fountain Of Youth and Who Knows Who Cares with an encore of Mount Washington and Sun Hands.