Track Of The Day : High Hazels - Joined At The Lip 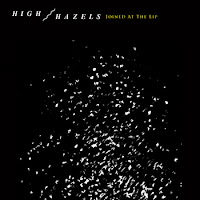 Joined At The Lip is the first product of High Hazels' recording sessions for their second album which will be preceded by a new EP next year, their first material in eighteen months since their Valencia single was taken from their self-titled debut. It's unmistakably them from the very first second, but it feels like a massive progression in both sound and ambition.

With such a long radio silence one might have feared for the future of the band, but a series of freak injuries and the need to balance real life with the musical one were behind the time it's taken for Joined At The Lip to be created and shared.

High Hazels have retained that very Sheffield sound that must run in the waters of the steel city, but without compromising any of their own identity in the process. There's a yearning romanticism in lyrics such as the opening line "in the backwaters of my bloodstream, nightmares play violin every night for me" that betray an intelligence and warmth in their songwriting that characterised their debut album and which is still present and correct here. However, there's a bolder, more dynamic and direct approach to the music very much evident in this first taster of the new material that could see them make the big step from next big thing to big thing.