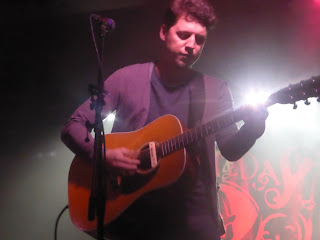 Fresh from the studio where he's been writing and recording songs for his second album and follow up to 2014's I'm Not Here, Dave Fidler played a well-received set at Manchester's Night And Day.

Opening his set with the instrumental Tommy, from I'm Not Here, is a successful move as immediately the audience are grabbed by Dave's guitar playing skill. From there the set is very heavily weighted towards new material with only Easy Gone Easy Come and the closing duo of Silver Spoon and lead single Taking Over, where Dave once again silences any chatter with his mastery of the six string, surviving from his debut.

The new songs tackle a number of subjects. Love Listens, which surely must be a single at some point that breaks Dave to a wider audience, manages that mean trick of lyrics that could be about everything in the world or anything specific with the simple kiss line of "money talks but love listens" whilst Heart Of Stone recalls a time when he met a woman in a prison who was on the last day of an eight year sentence whilst he was on a humanitarian trip to Haiti with his wife.

The beauty of songs like Rising Up and Home To Me though is the way that they sound achingly poignant in this stripped down format but are also ripe with possibilities of being expanded by other musicians and instruments. But that's for another day as the reception at the end from the attentive seated audience tells its own story as to how Dave won them over with them in their simplest stripped back form.