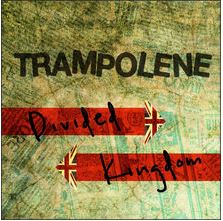 Divided Kingdom is the fifth in the series of Pocket Albums that Trampolene have released over the past couple of years. As with previous releases there's a huge variety on show from full-on everything turned up rock songs to delicate heartwrenching acoustic tracks and poetry from one of Britain's most underrated bands.

Starting with samples from news broadcasts about the 2011 riots, title track Divided Kingdom pulls no punches. A screeching guitar riff kicks in, drums power their way through and Jack's vocals act as a call to arms for the disaffected, one that so few musicians are making these days. "A prisoner of freedom, a divided kingdom" says everything you need to know about the message that he's conveying about how the hope of youth is being quashed in the country at the moment with other lines such "want something more than a tattoo or a cheap t-shirt."

Jack's almost unchallenged position as the people's poet these days, both literally and in his songs, is confirmed by the second song Dreams So Rich / Life So Poor, where he muses over the problem of working in a dead end job that you want to walk out on versus the equally skint option of being on the dole, having no cash and lots of plans "without my flag and a cider, it's hard to get fucked on a fiver, our culture's dying, it's not worth crying for." Like the title track, it's set to send the dancefloor into a heaving mass, all big unapologetic riffs and drums creating an intoxicating wall of noise. Its message though is a defiant one that refuses to admit defeat.

Blue Balls And A Broken Heart is a beautiful acoustic piece of self-reflection, disarmingly self-aware, open and honest as Jack reflects "I'm just a boy with his guitar, lost in his art, with blue balls and a broken heart" that's in stark contrast to what's gone before, but close your eyes and you can imagine the growing Trampolene army singing back every word in unison as Jack once again manages to tap into their raw nerves.

As the tour poet on Pete Doherty's last tour and with a number of poems having appeared on previous pocket albums, Jack has gained quite a reputation for that as well as for music. Slug is a poem about slugs and an eulogy that wonders why people don't keep them as pets "he's friendly and he is kind and he leaves a lovely trail behind."

The pocket album finishes with She's A Nice Girl, a ridiculously simple but tearjerking seventy eight seconds of music that sees Jack and bassist Wayne share vocals. Its beauty is in the fact that it sounds like they've just plugged in and it's come out this way - so much of what Trampolene do feels to be a genuine there and then outpouring of thoughts and feelings and that's why they get the devotion they do from their fanbase.