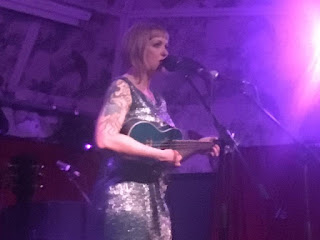 She Makes War is opening up for The Wave Pictures on their current UK tour. A long time favourite of Even The Stars, whether playing solo or with her band, she charmed a static Manchester audience with songs from her recent album Direction Of Travel, a couple of old favourites and two great new songs from her fourth album due next year.

Laura Kidd (for she is She Makes War) is one of the country's most underrated and underappreciated musicians. Operating on the fringes of the business, not part of any scene and very much queen of the DIY ethos and hard work, she's released three albums to date as a series of live recordings and EPs, but it's her live shows where her talent shines at its brightest. Whether she plays solo or with a band, every time you see her she adds something to the songs that we've come to know and love and she does it with a smile on her face that can melt the coldest of audiences as she eventually does tonight as they "doo doo" and clap along to the set closing Scared To Capsize, the opening track on her debut album Disarm.

She opens with another track, Olympian, from that record, and it starts the common theme that runs through a lot of Laura's lyrics - tales of broken relationships and In Cold Blood that follows is about one from Manchester. Its bitter biting lyrics are accentuated by clever use of the effects pedals. Delete is completely without instrumentation, layering vocals and harmonies on top of each other before making her way through the crowd singing through a megaphone before letting off a siren attached to it whilst Paper Thin, which features Belly's Tanya Donelly on the album version, is performed with a ukulele and stripped back feels even more raw and emotional than on the album although its punchline "let's do amazing things with good hearts" strikes a positive note.

Two new songs from her forthcoming fourth album bode extremely well, the second of the two the stand out as she talks of absence making the heart grow colder and imagining getting old but not with the song's protagonist. Both of them brim with the possibilities of being expanded on the album by other instruments into something quite spectacular.  Forthcoming single Stargazing has a world weary wistfulness to it, remembering good times before the inevitable denouement - but it's the way it is delivered that makes you feel like you've lived the experience with her before she concludes with the aforementioned Scared To Capsize.

Laura is on good form too, joking about how bad the response was when she asked who was looking forward to seeing The Wave Pictures (who we missed due to other commitments), at herself and her penchant for writing songs about failed relationships and getting freaked out by the light on the pen she's handed out for people to pass around to sign her mailing list during the set. This all makes you warm to her even more and you feel the audience doing just that, the impolite talkers at the start of the set that you always get are mostly shut up by the end. And silencing a gig crowd is one of the most difficult things for an artist to do. We're looking forward to album four even more now.