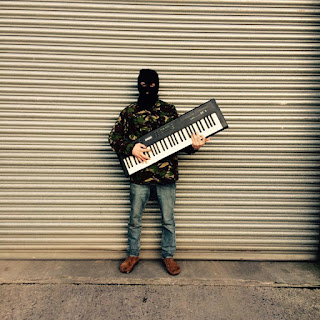 Terrorist Synthesizer is the final in a trilogy of Cabbage EPs, released one a month over the past three, that will make up their Young, Dumb And Full Of... record that's coming out in January.

The title track will be familiar to those who've witnessed Cabbage's increasing chaotic live show, the title a take on David Cameron's dismissal of Labour supporters as terrorist sympathisers. It starts with characters Nancy ("like needles"), Stephen ("wears speedos"), Peter ("swigging on a dirty bench") and Ann ("an activist") and they and other characters return throughout the song's verses, whilst the huge chorus proudly declares "I am a terrorist synthesizer, a loser, kill me father" before veering off in another direction. Like most of Cabbage's work to date, it teeters on that line between insanity and brilliance, lunacy and the thrill of music that makes you want to jump head thirst into a bouncing crowd.

The Road To Wigan Pier hits you square between the eyes from the off with a guitar riff and their social and political commentary is laid out for all from the start "when Hitler occupied the Rhineland, it raised hardly a flicker of interest, but when the FA tried to quell the pools, Yorkshire was a raging circus" and doesn't let up throughout. The only thing predictable about Cabbage in this mood is their unpredictability. And with that they give you their cover of Nancy Sinatra's These Boots Were Made For Walking and carnage ensues. As the first chorus finishes the question is asked "really boots?" and the reply comes"oh stop walking" before one of them screams. It'll generate a love or hate reaction, and you feel Cabbage are seeking that with most of what they do, and that's something that's missing with so much music these days.

The final track of the EP, Because You're Worth It, takes a different tack. Lasting near on nine minutes, it's the comedown from what's happened before it, both on this EP and the two previous ones, a reflection on cheap E's and Space Raiders crisps, that ends with them floating off into outer space in a spaceship to escape the tax man lifted up on a sea of glorious harmonies.

Where Cabbage go next is anyone's guess. Sure to be high in most 2017 tip lists and with a big tour planned for February and another Blossoms support tour in March, their spectacular assualt on the eyes and ears of the nation is set to continue.