Track Of The Day : Lucia Fontaine - When I Think Of You 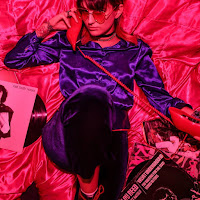 When I Think Of You is the third track to be revealed by Glasgow's Lucia Fontaine from her forthcoming Best Boy EP which will also include her previous tracks Best Boy and Lose My Mind,

This track is an intoxicating combination of chainsaw guitars and delicious harmonies that hark back to sixties girl groups albeit given a modern twist and, combined with the other two tracks, mark Lucia down as one to watch in 2017.