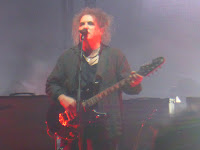 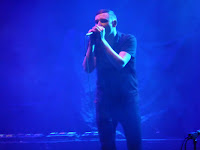 It's twenty years since The Cure last played Manchester Arena and as they returned to the UK at the end of a year-long world tour expectations were high amongst the 16,000 sold out crowd. The career- spanning set was cut short by Robert Smith's vocal issues but they still delighted with a two hour mix from most of their albums leaving their biggest songs to the end. Support came from Glaswegian heroes The Twilight Sad.

Last time we saw The Twilight Sad in Manchester, it was up close and personal in the Gorilla sweatbox. It was the first time we'd seen them, a couple of feet away from James and it was one of the best and most intense gigs of the year. Tonight they're up against the cavernous echoes of the arena with an audience to win over.

As ever front man James wraps himself so tightly into the songs that you feel he's on the edge of bursting and that's placed in even more stark contrast in this environment. The claustrophobic menace of the Gorilla gig is replaced by something more expansive that reaches out to those in the crowd with the respect to listen to them (there's plenty of ignorant idiots that don't). There's A Girl In The Corner and Seven Years Of Letter play with fire, the sparse set up amidst the soulless cavern of the arena accentuating the outsider feel to the songs. It's a mightily impressive set in difficult circumstances but it'll be great to hopefully have them back for ourselves next year. 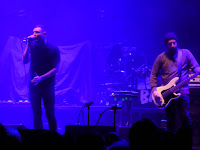 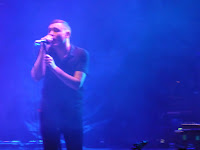 The Twilight Sad played Reflection Of The Television, Last January, Don't Move, Seven Years of Letters, It Never Was The Same, There's A Girl in the Corner, The Wrong Car and And She Would Darken the Memory.

For a band of The Cure's stature, there's one almighty problem in arenas. To sell 16,000 tickets you need to have some big songs that people will pay arena sized prices to hear, but when your best material is somewhat detached from the pop tones of Friday I'm In Love and Boys Don't Cry you have a problem. It's exacerbated when your intent is to play a thirty song three hour set because large parts of the crowd might simply not know the rest of the set. Add in the fact that this is the band's first headline set of their own in Manchester for twenty years (and first of any kind for twelve since they played Move Festival in 2004) and therefore the expectations are sky high.

This means that for large parts of the set the audience reaction feels flat, something that friends dotted around the arena also commented on and certainly something that wasn't evident the previous twice we'd seen them in the more intimate Royal Albert Hall. All that apart though, the first half of the set is something of a triumph notwithstanding. Focusing heavily on the mid eighties Head On The Door and Disintegration and backed with an impressive stage set up with alternating shots of the band and specially selected film footage and with Robert saying little between songs, the arena setting transforms these dark eighties bedsit anthems without losing the essence of what made them special. 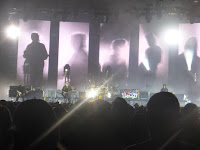 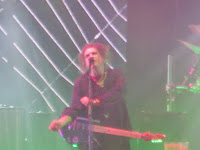 The later material such as High, Want, From The Edge Of The Deep Blue Sea and The Hungry Ghost do feel like they lose some of the crowd although they're delivered with a sparkle that's still there if you focus on it. They do go back into the eighties to finish off the main set with One Hundred Years and Give Me It.

Then things start to take strange turns, we later learn due to Robert having vocal issues that weren't obvious in what they'd delivered so far. They come back, play a stunning version of A Forest then leave again. Then they come back and play Burn from The Crow soundtrack and leave for a third time and seem to be gone an age and everyone scratched their heads wondering what was going on.

They do return for a third encore, a wonderfully sprawling Lullaby set to a huge screen backdrop of spider webs before the arena suddenly bursts into life to the unmistakable opening bars of Friday I'm In Love and a whirl of swirling red and blue lights where previously most of the seating areas had been static. That epiphany is continued through Boys Don't Cry, Close To Me and Why Can't I Be You? and Robert ditches his guitar for the final two. It's a massive contrast to what's gone before and at 10.15 the end of the evening as they depart again and the house lights go up.

"Manchester, we'll be back" are his parting words to us and we feel a little torn. The expectation had been a three hour set of thirty plus songs and we got two hours and much less so there's disappointment in that respect. But then when you consider that's still more than you'd get from most bands playing an arena of this size and when it becomes clear that the vocal issues might have meant no show at all that dissipates. As long as it's not twenty years before we reconvene.

The Cure played Shake Dog Shake, A Night Like This, The Walk, Push, In Between Days, Sinking, Pictures Of You, High, Lovesong, Just Like Heaven, Primary, Want, Hungry Ghost, From The Edge Of The Deep Green Sea, One Hundred Years, Give Me It, A Forest, Burn, Lullaby, Friday I'm In Love, Boys Don't Cry, Close To Me and Why Can't I Be You?

Email ThisBlogThis!Share to TwitterShare to FacebookShare to Pinterest
Labels: The Cure, The Twilight Sad