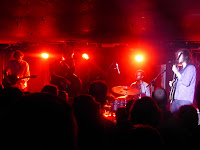 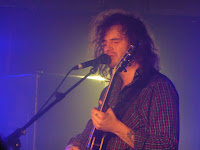 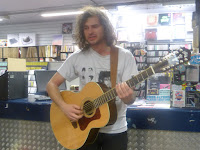 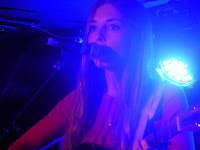 Ryley Walker is a unique character in the music industry, a man with an immense talent that refuses to play by any rules other than his own, which tend to be to do whatever the hell he likes. He returned to Manchester on Monday night for his fourth show in the last eighteen months, each one different in set up, in band mates and in style. Plugged in this time round with a band of four brothers in tow, he proceeded to play an hour and forty five minute set with just eight songs to an absolutely captivated audience. He was supported by Kayla Cohen who performs under the name Itasca. Prior to the show he rocked up at Piccadilly Records with just an acoustic guitar and proceeded to play four songs with no amplification.

As you'd expect with someone so seemingly disorganised, the thirty or so of us that got the short notice announcement of the Piccadilly instore after the store's scheduled closing time of six stood waiting around for his Ruby Lounge soundcheck to finish. He turned up guitar case in hand, name spelled wrong on it and hugging people he recognised from previous shows. The staff hand him a beer, he takes about half of it in one glug and proceeds to play us four songs in their most raw and intimate form. He starts with Sullen Mind and The Roundabout from his recent album Golden Sings Which Have Been Sung, before going back to a song "I haven't played for ages" On The Banks Of The Old Kishwaukee from its predecessor Primrose Green. He concludes "as we're in a record shop" with a cover of Tim Hardin's If I Were A Carpenter. Being so up close and personal in the bright lights of the shop, you witness how his personality changes the minute he starts to play, lost in the music he's creating and without amplification you can hear every little nuance and rough edge in his voice. As he finishes, he invites us all down to The Castle in the hope that Mark E Smith is in there to have a whisky before the Ruby Lounge show.

Opening up the show in the Ruby Lounge is Itasca, a singer-songwriter from California who's supporting on the whole of Ryley's European tour. A very understated performer, her songs are nonetheless very delicate and fragile and they're afforded the respect of listening by the majority of the packed in crowd. Her guitar playing style is quite intricate and the sound in the venue is excellent so that can shine through, her vocals are almost dream-like at parts, the softness giving them a slightly lilting feel that makes you warm to them and to her and hold the attention. About half the songs come from her recent album Open To Chance with Buddy and Henfight the stand-out songs, but the others maintain the high watermark leaving us and the rest of the crowd mightily impressed by what she tells us is her first show in Manchester.

"Fuck Donald Trump" is Ryley's opening line as he waits for the rest of his band to come on stage. It's no surprise that he feels this way given his outlook on life, his devil-may-care approach to everything until the moment he walks on stage and picks up a guitar. Backed by friends Paul, Anton, Brian and Frank the songs start off almost unrecognisable from their recorded studio versions, building slowly with double bass, keys, guitars and drums, stretched out by improvisation with the five of them completely atuned to each other to the extent that there's only eight songs in the hour and forty minute set.

It's never self-indulgent though and the crowd are transfixed by the intensity of the performance, but also between songs where Ryley switches back to the amiable slightly crazy American dude with bizarre conversations about wanting to meet Mark E Smith in The Castle Hotel, where he tells us about hangovers so bad he can't read, asks us whether we prefer Waitrose or Marks And Spencer or responds to someone who shouts Judas at his embracing of the electric guitar. The time he takes to tune allows those conversations to flow and entertain us with his off-centre wit as well as the power of his music.

The Roundabout, the latest album's lead single about the anxiety of life in his native Chicago is preceded by over five minutes of build up before its "ass-shaking" melody kicks in, the band set up making the song sections harsher and more raw than the recorded versions but no less impactful, whereas Sullen Mind doesn't meet the lengths of the forty one minute version on the deep cuts version of the album, but still stretches to over ten minutes without ever letting the audience's attention wander. Primrose Green is well represented too with the title track opening the show along with Summer Dress and the fifteen minute plus encore of Funny Thing She Said. He even throws in a new song from his fourth album which he's deep in the writing and recording process for between tours.

There's something truly special about Ryley Walker. When those older than us talk about seeing iconic acts in their heyday that are more appreciated now than they were back then because they didn't conform to the latest trends of the day then you suspect that might be the fate that befalls Ryley. Whilst the songs on the records might get him radio airplay, someone coming to see him on that basis will not get what they bargained for - but no one in a boiling hot Ruby Lounge seems to care an iota as they watch and listen utterly and completely enthralled by a man and his cohorts immersed in the magic they can create through music.