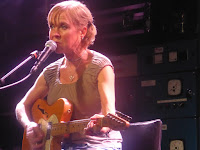 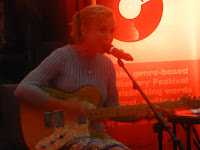 Kristin Hersh is in the middle of a rare UK tour to support the release of her new book and double CD entitled Wyatt At The Coyote Palace. We caught her in conversation with John Robb and performing a short acoustic set at the Louder Than Words Festival at Manchester's Palace Hotel on Saturday afternoon before Sunday's sold out show round the corner at Gorilla.

As well as being an acclaimed musician over three decades with Throwing Muses, 50 Foot Wave and under her own name, Kristin Hersh has also branched out into books, often combining the two as she did with the last Throwing Muses album Purgatory/Paradise, her last solo album Crooked and its follow up double album Wyatt At The Coyote Palace. This made her a ideal guest for an interview at the expanding annual Louder Than Words Festival that is dedicated to the music genre of literature.

John Robb led the conversation with Kristin which started around a discussion of her book Don't Suck, Don't Die : Giving Up Vic Chesnutt which she wrote about her long term friend who, despite an accident that left him partially paralysed as a teenager, became an established musician. Kristin recalled stories of their friendship and how he countered his disability with engaging warmth and obvious love for her friend. The conversation then moved on to her own songwriting process and how she has songs come to her, often in the night, that she has to write down otherwise they make her ill and how that process has changed over time. Robb's insight as a musician himself was interesting as he seemed to reassure Kristin before she said something that what she was telling us was not unusual at all in an artist's world. 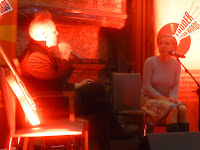 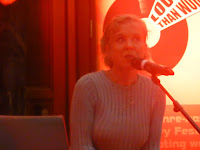 She then talked about how she has two personalities, the off-stage one and then the personality that takes over once she starts to perform, that knows all the songs, that drives them out.  She recalls a tale of Glastonbury where she got hit on the head by a bottle during the first song that knocked her off-kilter and she played most of the set as instrumentals. It might seem a bit far-fetched at face value, but when she picked up the guitar to play a short four song acoustic set at the end of the talk - Bright, Krait, Mississippi Kite and Sunray Venus - a steely gaze set across her face and it did feel like we were watching a different character, if not a different person, in action to the one that had been talking a few minutes earlier. The conversation, as was its intent, had set the performance in a different light.

To Sunday evening and we're seated in a packed Gorilla on the world's most uncomfortable chairs almost sat on the person next to us whilst the one behind knees you in the back, but it seems somewhat appropriate as any gig featuring Kristin, whether it be solo or with Throwing Muses, is never going to be a comfortable ride to be enjoyed in luxury. Ever confessional, and she's in tears at a couple of points in the evening, the hour and a half is so raw that we're on the edge of the seat as Kristin walks an emotional tightrope whether she's reading or singing about the breakdown of her marriage or reading excerpts from the book she wrote about her departed friend Vic.

About half the set is mainly culled from the new album, although she jokes that her friends told her before she set off on tour not to play any new songs because people hate new songs, as well as from her last solo album Crooked, although Hips And Makers (her solo "hit" Your Ghost and The Cuckoo), Sunny Border Blue (Your Dirty Answer and Summer Salt) and The Grotto (Sno Cat) are also represented. 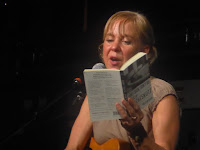 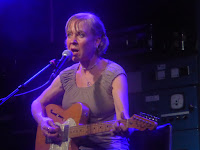 As you'd expect there are some Throwing Muses songs too, but not the ones you'd expect from any regular artist in solo mode - Sunray Venus is from the last album Purgatory / Paradise and is preceded by a reading from the accompanying book, City Of The Dead was a b-side to the Firepile single whilst You Cage was an album track on their lost classic (and personal favourite) House Tornado. There's also a couple of covers in there too - the traditional Poor Wayfaring Stranger as well as Vic's Bakersfield after the reading of the section of Don't Suck that gives it its title.

The audience sit in silence throughout the songs, dumbstruck by the savage intensity of the performance. If anyone doubted Kristin's statement the day before about having another personality when she performs then just seconds of watching her would dispel that. It's as if her body has been overtaken by the song and the words are being expunged from her as she weaves her head from side to side staring intently and intensely into the near distance. It feels like she's on the edge of breakdown, that demons are being expelled by force from her fragile frame in a way that many musicians try to force, but with Kristin, it feels like it's out of her control and completely involuntary, whether she's singing her newest or her oldest songs.

Kristin Hersh is one of the few truly unique and extraordinary musicians we have left. Operating in a space outside the traditional music industry (her work is funded through a Cash Music scheme called Strange Angels where fans subscribe and receive music to their inbox, special offers on gig tickets and a more personal artist / fan relationship), she has no need to bow down to the paymasters of record labels and their demands that would try to smooth off the edges that make her such a compelling songwriter and performer. This show was hard going at points, watching someone give everything and reveal so much, but that's when music is at its most impacting, emotional and powerful.

Kristin Hersh's official website can be found here and she is also on Facebook and Twitter. Details of her Strange Angels subscription program can be found on this link.