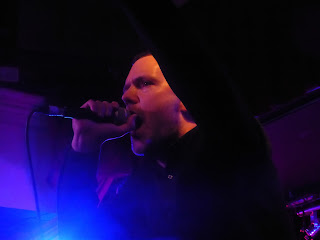 The Slow Readers Club have been making their mark across the Irish Sea in Dublin. Following on from a sold out show at The Workmens Club earlier in the year on word of mouth and support from local station TXFM, they returned to pack out the much bigger legendary Whelan's on Saturday night. We got the guinness in and watched a stunning performance including the first play of a new song Lunatic from the writing sessions for their third album.

It's been quite a year for the band having supported James in May and packed out a tent at Kendal Calling and two glorious sets at Victorious as our 2015 album of the year Cavalcade has done its work for them. The best is still to come though as they play sell out shows of their own at Manchester's Ritz and London's Oslo in November as well as three more shows with James in December.

This is the first of that trilogy of shows and there's a feverish excitement as they come on stage around 9.30 and start with Cavalcade's title track. We look around and people are singing every word back to them. They're clearly brimming with confidence these days the moment the music strikes up and this transmits itself to us. They play all of Cavalcade tonight save for Secrets and, somewhat surprisingly, Don't Mind and aided by a great in house system that allow the subtleties and nuances that hide behind the power in the music to be heard, it feels more vibrant, more celebratory and vital than they've ever done.

They even manage to laugh off Aaron coming into Start Again at the wrong place and them having to indeed start again, something that could have fazed them twelve months ago. That comes from watching James do just that night after night, the belief that this year's success has given them and the relationship they've clearly built with their audience. 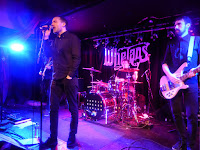 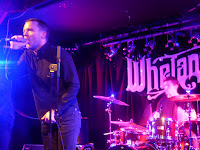 In addition they play four songs from their self-titled debut that don't shirk in comparison live to their younger brethren. Feet On Fire, Sirens and One More Minute are big anthemic stompers that are made for the dancefloor and moshpit whilst Block Out The Sun inhabits the same widescreen ambitious sonic space that the set closing Know The Day Will Come occupies.

The new song, provisionally titled Lunatic, will delight both old and new fans of the band. Like Cavalcade, it doesn't try and be something that it isn't, it's a big bold song that takes aim at the heart and the feet and hits the target in both respects and assuages any fears that might have lingered about the pressures of writing a follow up to a breakthrough record.

Visually Aaron has developed into a confident frontman, always on the front foot, every word delivered with power and passion in his eyes, in his voice and in his movements. Kurt and Jim are almost oblivious to this during the songs, lost in a world of their own, but with an energy to match to the music whilst David's drumming both propels the songs forward but also adds shade with percussion that Whelan's set up allows us to appreciate. 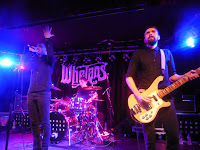 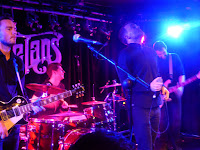 The reaction at the end and the queues at the merchandise desk as well as the time people spend raving to the band about the performance tell their own story. This is a band that, without a few twists of fate,  could have been one that was cherished and deified in their home city by those fortunate enough to have crossed their path. Nights like today give you the belief that great music can win through, that the good guys can have their day and that even without an industry machine behind them you can do it. They're not just the best band in Manchester at the moment, they're an inspiration to any band that keeps hitting walls, getting diverted down cul de sacs or fed lines and promises that people can't deliver that it can be done.

The Slow Readers Club played Cavalcade, Fool For Your Philosophy, Sirens, Days Like This Will Break Your Heart, Start Again, Here In The Hollow, One More Minute, I Saw A Ghost, Feet On Fire, Lunatic, Forever In Your Debt, Block Out The Sun, Plant The Seed and Know The Day Will Come