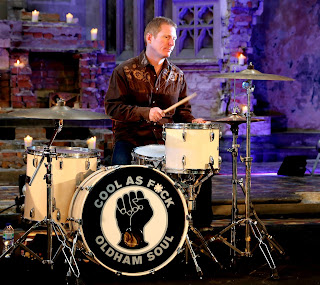 Craig Douglas Gill was drummer in Inspiral Carpets, but he was much more than that. He was a father and husband first, a friend second and a musician and music lover third. His death on Sunday at the age of 44 leaves a massive hole in the lives of all three of those worlds. In the absence of being able to do anything else meaningful, we'd like to pay tribute to an incredible drummer, a dry witted, intelligent and humorous man that we feel privileged to have been able to call a friend.

How Craig, or Gilly as everyone called him, came to join the Inspirals is seeped in urban music mythology. Legend has it that one of the many drummers that they had in their earliest days had let them down at a gig they were doing in a pub near Gilly's house and he volunteered to step in. The problem was he was 14 years old, didn't know any of the songs and the gig apparently got cancelled because of the weather. But the band liked his style - which you can hear all over the early Waiting For Ours, Songs Of Shallow Intensity and Cow demos - and he somehow found himself a permanent fixture on the stool, somehow managing to mix being at school with a full time member of a band that started to gain some traction in 1987 and 1988 both in Manchester and further afield.

To us teenagers who were witnessing the blossoming of our city's music scene, he was something of a hero. While we admired the cool of the Roses, the rebellion of the Mondays and the plain awkwardness of James, we could never be them, they were living their dreams not ours whilst the Inspirals felt like they were our band.  Of all of them, Craig, like us, would have to get up in the morning to go to school, yet there he was up on stage in the Boardwalk, the International and the Hacienda, playing twenty minute versions of What Goes On and Plane Crash. He was living our dreams, one of us doing what we all wanted to do. The cult Dung 4 tape that they sold at gigs and in Piccadilly Records, their debut album in the eyes of those around at the time, has his mark written all over it right from the opening salvo of Keep The Circle Around. 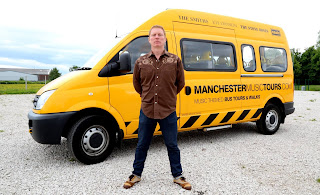 As the band's star rose, their debut album Life entering the charts at number two, Gilly never forget that. I remember being greeted by a rugby tackle as I wandered into the soundcheck when they played Norwich UEA in 1990. The Inspirals philosophy then was as it is now; to treat their fans as friends even when they were topping charts and filling venues the size of G-Mex. People remember that and it's why there are so many tributes to him being paid on social media by fans of the band, his contemporaries, those that have benefited from his wisdom as well as those that took part in his musical tours of Manchester.

Those tours became part of folklore in Manchester and beyond. As disciples of The Smiths, Oasis, Joy Division and The Stone Roses flocked to Manchester, Craig would take them round the sights of the city, sometimes in his own car in the early days, showing them such places as Southern Cemetery (gates), Morrissey's house, the house where the Definitely Maybe cover was shot and of course Salford Lads Club, the pilgrimage for any self-respecting Smiths fans. It was Craig's warmth, welcoming Oldham charm and his encyclopedic knowledge of the history of the bands and the city and its venues that meant any competition was rendered pointless and irrelevant. When he decided to do a James walking tour earlier this year, he even taught me a few things about the band I didn't know.

Double-decker buses would be hired on big occasions, but he was best known for his orange Transit van he would transport awe-struck lovers of the city's music scene around in. He'd often also use the horn to scare the shit of me when driving up behind me as I walked along Oldham Street with headphones on. Always a joker, but you could never get annoyed with him. I'd often stop and sit with him in the van and talk music, or on his record stall at the top of Affleck's Palace, or someone else would already be there on or in Dry chewing the fat. 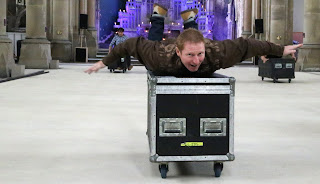 The return of Stephen Holt to the Inspirals in 2012 rekindled that gang mentality of the earliest days of the band and arguably some of the best, if not the biggest, shows of their career as well as the finest record of their career (appropriately entitled Inspiral Carpets) in 2014. And Craig was dead centre in it, drumming so ferociously he'd rip his hands apart so he'd hardly be able to play at soundcheck and then deliver an even more punishing performance that night, playing through the pain barrier. One particular night at Sheffield Leadmill on the Life tour in 2013 springs to mind, but there was no way he was going to cancel the show despite you being able to see him wincing every time he hit the drums. For some reason unknown to both of us, we ended the evening having a spring onion eating competition in the dressing room. But that was Gilly down to a tee - the ultimate professional when needed and the life and soul of the party when not.

His death leaves a huge void in the Manchester music scene. His tours were part and parcel of the preservation of this city's cultural heritage that's constantly being watered down by the destruction of iconic venues such as the Hacienda, Twisted Wheel and soon The Star And Garter and the rise of cocktail bar culture. He was a man who loved to share his knowledge of music, learn more, listen to others' opinions, an ear always open to something new or just talk crap for half an hour. Whilst the music world has lost many legends this year, Gilly was more than that - he was one of us.

But more importantly, Craig leaves a wife - Rose - and three young children - Georgia, Orla and Levon to whom he was much more than just a friend. And a band - Clint, Stephen, Graham, Martyn and Tom - that were his blood brothers. Our sympathy goes out to them all tonight. The devastation we feel as friends and fans can only be miniscule in comparison to what they're experiencing. All our love is directed towards you and we will make sure that he is never forgotten x.