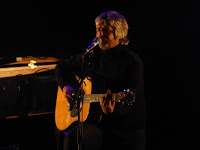 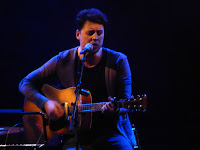 Ahead of the Spring 2017 release of his debut solo album Leave Alone The Empty Spaces, John Bramwell has embarked on two preview shows, the first at Manchester's Royal Northern College of Music. Accompanied by a pianist, cellist, guitarists and a pedal steel player, he revealed eight songs from the album as well as working his way through the beloved I Am Kloot back catalogue to a rapturous reception from a sold out crowd. Support came from Dave Fidler.

The main room at the RNCM is probably Manchester's finest concert hall. Seating 600, every one with a superb unblocked view of the stage and boasting acoustics set up for an orchestra but also ideal for a rock concert, it's the perfect setting for the audience to sit and soak in the new material whilst drinking in the intoxicating wordsmithery of classics that date back to John's earliest incarnation as Johnny Dangerously through to I Am Kloot's last album Let It All In.

First up though is Dave Fidler who has toured constantly with John over the past couple of years and who appears to have played a major part in reawaking John's creative juices as the two bounce ideas off each other whilst having a ball doing so. He reappears later to play guitar on six of the new songs, but for half an hour the stage is his. It must be one of the biggest venues he's played solo, but he doesn't betray any nerves and his uncluttered natural organic sound is perfectly suited to this hall and the audience treat him with the reverence he deserves. 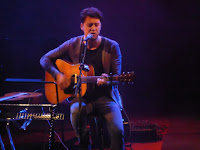 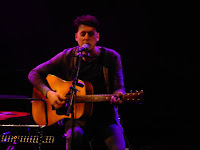 His six song set mixes tracks from his debut album I'm Not Here, opening with the title track where he jokes that he is, as well as two new songs from the album he's starting to write and record. Can't Stand It and Home To You, which he poignantly dedicates to his Dad whose death he wrote the song about reflected in some personal lyrics, slip into the set seamlessly alongside Easy Gone Easy Come, his instrumental ode to one of his guitar heroes Tommy (Emmanuel) and the set-closing Taking Over, which has a virtuoso closing section that has the audience sitting open-mouthed silenced in awe as the crystal clear sound allows to hear as well as see the intricacy of his fingerwork. He leaves to a rapturous response.

After a short intermission, John comes on to stage in a pair of sunglasses which he proceeds to tell us are prescription. He opens with a new song Lightning Tree accompanied by Alan on piano, a beautiful yearning number which he stops and starts again, amusingly as he reveals at the end of the song that the sunglasses were there so he could read the lyrics without us noticing as the song is so new. It's that disarming honesty that has probably held John and Kloot back at points, a maverick personality in a music industry that's increasingly sanitised and less tolerant of those that refuse to conform. It's that which makes him loved by his fans though; why he's packing out this venue on his own and why the new songs get a respect that often gets cast aside by fans who just want to hear their old favourites. His first single from Leave Alone The Empty Spaces is Time's Arrow, which is being given away at the gig for a donation to Macmillan Cancer. Of the new songs, it's the one that's closest to what you'd expect from his Kloot past, not surprising as it's been in his solo set for a few years now.

He's on good form throughout, joking with the sound man about which guitar he's going to randomly pick up and play and the nightmare that causes for his sound man Richard, introducing his Mum being in the audience and laughing at the guy who shouts that we're all his mum, recalling a conversation from the night before with his girlfriend that ended with her saying "what people don't realise is that you're a dick" before bursting out in laughter at his own story. These moments would be worth the entrance price alone, as he's genuinely funny and the crowd love the interaction, but of course tonight is all about the music. 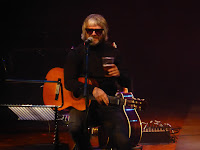 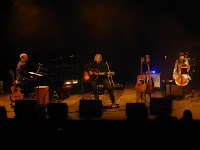 He interchanges between performing solo and accompanied by Alan and Harriett on cello. New life is breathed into fan favourites, stripped back to their bare bones with piano and cello where there once were bass, guitars and drums. The Same Deep Water As Me sends shivers up the spine, the dancing combination of cello and piano making it even more poignant, whilst that same instrumentation adds a raw drama and tension to the likes of Gods And Monsters and 86 TVs.

Black And Blue, a song written in his bedroom as a sixteen year old, still rings true today and justifies his immodest assertion that once he'd written it he didn't write another a song for two years because he couldn't better it. Tracks from Natural History such as Bigger Wheels and No Fear Of Falling sit alongside more recent favourites Bullets, I Still Do and To The Brink, where John asks us to play the role of human accordion in the song's breakdown. 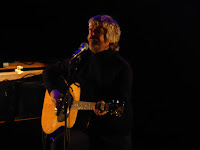 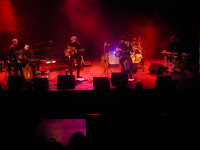 As the show comes towards its end, John unveils six new songs accompanied by Dave Fidler, Dave's brother Andy and Adrian on pedal steel. World Full Of Flowers recalls the wistless romanticism of Shoeless, an optimism that doesn't often permeate through in John's work.  However, lifted with vocal harmonies, his voice has a reassuring warmth to it as he ponders "I wanna run where the sunset breaks, make beauty for its own sake" with Dave and Andy adding harmonies that serve to strengthen that glow. Who Is Anybody Anyway has a similar feel to it, questioning the world around him "there's been some minor deviation within my random number generation", the song ending in John, Dave and Andy repeating the title's question. It's a little bit of a departure for John, but judging by the huge grin on his face at the end of each of the new songs and the attention and response they get tell their own story.

Leave Alone The Empty Spaces, the title track, is a bit more of a subdued affair, but no less affecting in its impact, Andy's simple beat and Adrian's longing yearning pedal steel an enveloping blanket to John's questioning of the world. Working My Mind Off has one of those earworm riffs running throug it and has a wonderfully curt kiss-off line that runs throughout "gonna fake it till people don't appear at my door." Days Go By again heads into territory John's not touched before, the pedal steel put to great effect throughout, a yearning verse melting into a scurrying agitated chorus to give a great contrast. Get Away With This sees John musing on his outsider status, and he tells us he's releasing this album without the traditional business involvement, and contentment with his lot "I'm living on the outside, I love the world so far away" and referencing about slow trains going nowhere fast.

The boys depart and John finishes with Northern Skies and Proof, two of his best known songs. The first sees John sing the first line of Suspicious Minds before breaking down in laughter and joking about the similarity between the two songs. It inevitably starts a sing along although it's less beery and boisterous than normal before his usual set closer Proof brings the evening to an end. But tonight was not really about a revisit of his well-known songs but an introduction to something a little different.

Half way through John jokes as he messes with a lead that if any reviewers are in they'll write that "Bramwell has reached new heights of professionalism, he's been doing this for a while now" before laughing at himself again. But he inadvertently reveals the truth about tonight, that this was the moment that he stopped being just the front man of I Am Kloot playing solo tours like so many band leaders do and opened up the doors and windows to a new world. Leave Alone The Empty Spaces will be a record that is unmistakably Bramwell in its genesis, but a departure from the world of I Am Kloot that will surprise and delight.

John Bramwell played Lightning Tree, Time's Arrow, Bigger Wheels, Black And Blue, Mouth On Me, Fingerprints, No Fear Of Falling, I Still Do, Gods And Monsters, The Brink, The Same Deep Water As Me, Bullets, 86 TVs, The Moon Is A Blind Eye, World Full Of Flowers, Who Is Anybody Anyway, Leave Alone The Empty Spaces, Working My Mind Off, Days Go By, Get Away From This, Northern Skies and Proof.