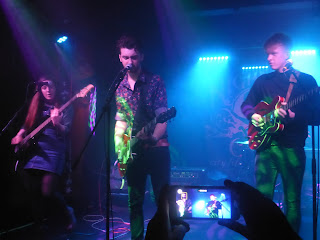 One of Manchester's fastest rising bands Lunar headlined the latest This Feeling club night at the Night And Day Cafe on Saturday night to a packed crowd of their ever-expanding fan base and those curious to see what all the fuss is about. A seven-song set crammed full of singles present and future kept the hot and sweaty room dancing and wanting more.

Opening with their next single Come Home, it's clear that Lunar mean business. An extended opening is revelatory in itself as it feels like something has changed in the band - it feels more purposeful, more together than they've ever sounded before without losing the spark that marks out the bands that have something special from those that are merely good. Luke Bonnell's guitar riffs lead the song that's set to become one that expands their fan base exponentially when it's released next year. The final "better than that twat darling" set to become something of a singalong even though it might prevent serious radio play in its current form. 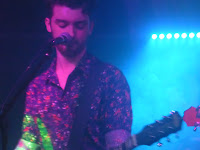 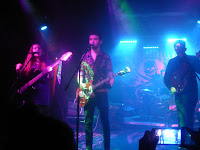 Girl At Home has a furious energy at its core, the sort that sets a crowd off, Max's drumming calling the shots around which the other three dancing around it. It stops dead before building back in and then letting loose with an invitation to get your feet moving that it's impossible to turn down. Whilst there's calls for Wonderwall from some joker who doesn't realise he wasn't funny the first time yet alone the twentieth, it's their previous single Showboater that follows. Simple, direct and with no messing around, it's obvious why this has had such an impact for them as the chorus kicks in and Sam and Christie's vocals collide and merge with those singing back every word.

Say My Name is the newest song they play tonight and it's done with the guitars turned up rather than the semi-acoustic version they've played before and it's all the better for it. Like everything else around it, it screams single at you, a big chorus that's made for thousands to sing back whilst Love And Affection shows that they can pare things back. It's temporary respite though as Gonna Get You Down returns to the quick fire hit and run approach that has served them so well.  Inevitably they finish with debut single Our Way, a song that now feels a million miles away from that innocent first recording that they put out there a year and a half ago. The guitars, the vocals, the drums, everything feels bigger, bolder and better and no doubt it'll make a reappearance somewhere down the line as it screams out as a song that will take them to a much bigger audience.

Tonight felt like a big moving up through the gears. One of the few criticisms you could have thrown at Lunar in the past was that they never quite looked like they wanted it, that it felt like they were messing around rather than being serious about fulfilling the potential of the obviously great songs that they have in their pockets, but tonight dispelled that. Tight without losing the infectious energy, still rock and roll (Christie swigging from a full bottle of rose like the finest rock stars) and with a renewed sense of purpose that leaves everyone wanting more. The packed in crowd agree with us.