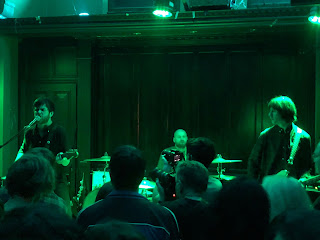 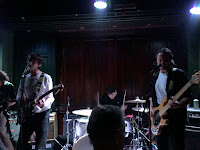 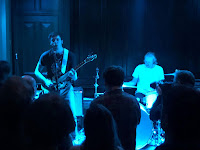 Déjà Vega's biggest headline date so far saw them sell out The Castle Hotel in Manchester on Saturday night. With hardly space to move and sweat dripping from the ceilings, a packed crowd was delighted by an hour long set featuring both new material and old favourites. Support came from secret guests Dantevilles and their new line-up ahead of their forthcoming tour and Chester duo Deh-Yey.

Deh-Yey might just be a duo but they make a ferocious noise that is warmly appreciated by an already busy room. Cash's lead vocals fight to be heard against the wall of noise that his guitar and Tom's drums create. There's much more to them though than loud noise even as they test The Castle's sturdy sound system to the max, there's an angry energy in the vocals that does as much to propel the songs headlong to their conclusions and there's moments where they stop dead in their tracks and then change direction carrying us with them. It strikes a chord with those here for the headliners as the bloodlines run close together as people make a frantic grab for the CDs that they throw out at us during the course of their set. 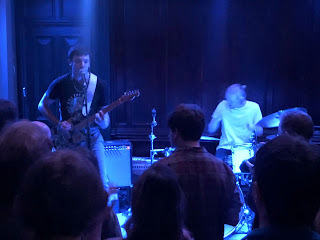 Dantevilles are the unannounced secret special guests, much to the chagrin of those that somehow believed the internet joke that it was going to be Foals. They've been off the radar for a while, something that often spells the kiss of death for a band, but they've been reforming, reconfiguring and reevaluating. They've brought in Alex on drums to complement the trio of long-term friends Connor, Paul and Jamie and right from the off there feels like there's a new focus to them, still retaining the fluidity and the dual vocal approach that made tracks like Perfect Place and It Might Be Tomorrow stand out but tightening it up around the edges and their sound is a lot better for that adjustment in approach. 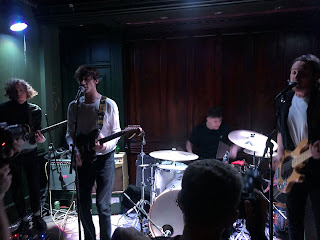 Intriguing they start with four songs that they've already released and finish with four new ones. The old favourites - the two aforementioned plus Daydreamer and The Fighter - feel tighter than before as Connor and Jamie seamlessly exchange the vocals, both contrasting and complementing at the same time. The new material takes that blueprint and starts to expand on it, particularly Save Me A Dance and the set-closing Fool For You, which both feel like old familiar friends on first listen, such is the way Dantevilles songs grab you right from the off and make your acquaintance. In many ways 2019 is going to be a make or break year for them after their time out, with a tour coming up on the horizon, and tonight's set is a pressure-free reintroduction for them that goes down a storm with the now packed in crowd.

It's seven months since we last saw Déjà Vega play, an age in terms of a band that seems to be constantly playing shows, eager to play to new people all the time. The sold-out signs might lead them to reconsider that approach - as filling a room every three months is more impressive to those who make decisions in the industry than half filling one monthly - but the minute they take to the stage, they're focused on one thing, delivering the most intense, exciting set they possibly can, and in that regard, they don't have too many peers around.

In the downtime Déjà Vega have been hard at work creating new material and no less than six of the ten songs in their main set don't feature on their debut album that is sat somewhere gathering dust due to the label that was putting it out hitting financial problems. There's an insatiable thirst to take the band forward and over the length of an hour, double their usual set time, they pummel the hot, sweaty crowd into submission. The extended set allows you to really appreciate them, the precision in Tom's drumming that holds everything together and dictates direction, pace and intensity, the way Mike's bass, delivered with a nonchalance that you might consider disinterested were it not for its majesty and the sheer unbridled way in which Jack gives every ounce of energy to the performance, like a man possessed by the guitar in his hand and microphone in front of him. 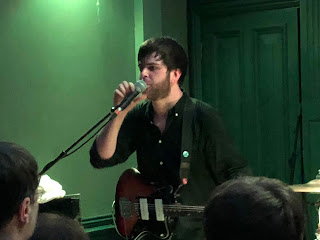 The new material hits you hard between the eyes. People will wake up battered and bruised this morning not just by the moshpit that develops but emotionally by the power that a Déjà Vega experience saps from you. The trio of Harmonia, Distorted By Wealth and All Words is bloody, belligerent and relentless cutting through the now uncomfortable heat of the room and the sign of a band in a rich creative period. The final song of the main set The Test sees Jack find space somewhere amongst us before they deliver an even more ferocious version of the song's breakdown than we've witnessed before, Jack giving Tom a helping hand on one of his cymbals.

As it's their show they've granted an encore and they go back to old favourites Friends In High Places and Pentagrams, two songs that demonstrate aptly the Hyde to the recorded version's comparative Jekyll. The roar of appreciation at the end and the call and response "DEJA" "VEGA" chants tells the story of a band about whom the word is spreading slowly but surely. To experience them at their peak you have to see them live - hopefully there will be more headline slots like this in the pipeline to allow them to spread their wings and show us what's going on in their creative processes.

Déjà Vega are on Facebook and Twitter. They support New Candys at Manchester Peer Hat on March 9 then play Chorlton St Clements Church (Son Et Lumiere Deux) on March 16 and Winsford The Electric Church on April 13.