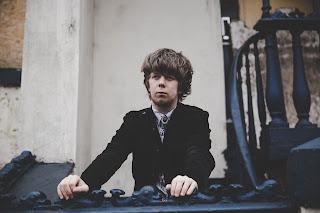 James Holt is one of the most unassuming characters on the Manchester music scene at present, but beneath his lack of rock and roll antics and showmanship lurks one of the city's finest songwriters and one that is slowly getting the acclaim that his work deserves. With a new single Come Out To Play just released and a packed 2019 ahead of him, we caught up with him before his Night People headline slot on Friday to find out more about the single and his plans.

It's been two and a half years since we last spoke to you when you released Sanguine On The Rocks and Butterfly, what have you been up to in the intervening time?

Wow – such a long time! I’ve released 4 singles since then (‘Come Out to Play’ is my fifth in that time!). I’ve been writing and recording a lot, with so many gigs and festivals in between. I also graduated from Salford Uni too, Masters in Music composition.

Could you tell us a little about your new single Come Out To Play?

It’s a journey through the life of an introverted person and their struggle socialise with people. Each verse is a different stage of his life, represented by the references to different seasons. There’s never an explicit reason why but there are hints that he is hoping for something more, but it’s in the last verse where our character sees himself in his son and tells him not to make the same mistakes he has made.

Musically, I like to think it sounds as if Johnny Marr had joined the Beatles in the studio for a day!

You play most of the instruments on the single yourself. Was that a conscious choice to make it sound exactly the way you wanted it to?

I play piano, guitar and cello to a pretty high standard, which gives me a broad range of instrumental sounds to tap into (and there’s a lot of overlap, for example guitar/bass and I can play violin lines on the cello), so it’s always been easier for me to record the parts myself. It’s more direct and saves me explaining an idea to someone else to interpret - I just play it myself.

I’ve also started to play and record drums myself (I have a demo version of ‘Come Out to Play’ with me playing drums!), just as a way to show Aden my rhythmic ideas and I let him interpret it how he wants.

There's an intriguing video to accompany it, what was the inspiration behind it?

Wes Anderson! Matt Boone (director) and I had this idea of filming me in a retro chic house and with a Wes Anderson style – slow zooms, super symmetrical shots etc. We couldn’t find a location so someone suggested we rent some antique props, which lead us to Stockyard North Salvage, and we figured we might as well shoot there.

You picked up a number of new fans last year when you supported The Slow Readers Club at Bury Met. Do you think word of mouth is becoming even more important these days in spreading the message about artists such as yourself who don't have huge promotional budgets to throw at their music?

Word of mouth is definitely the strongest form of advertising. If you have a friend who tells you to listen to something you’re far more likely to follow it up than glancing at a Facebook advert. I think that’s where the ‘buzz’ around a band comes from, just people talking to each other about a great new band/artist they love, that’s organic, everything else just seems unnatural.

Actually, the best form of advertisement would probably be to get up onstage in front of new audience and play your songs, like I did at the Met (with thanks to The Slow Readers Club).

You're headlining Night People on Friday night.  What can we expect from the show - will you have a band with you and can we expect new material?

I like having a bit of fun with the crowd and getting them involved (especially in my anecdotal explanation of ‘Come Out to Play’…), so you can expect a bit of that! I’ll be playing with my band (with a special guest vocalist who’ll join us for a few songs) and playing new material, as well as some reworked older songs.

Oh, and we’ll be handing out complimentary (and Bolton’s finest) Carrs Pasties!

On the subject of new material, you've released a number of singles over the past year.  Is there a physical release planned for them any time soon?

Yes! Just announced on Monday that I’ll be releasing the ‘Come Out to Play’ EP (on CD), featuring 4 recent singles and a bonus track. They’ll be available at the Night People show and via my website.

I would quite like to have some vinyl pressed one day but it’s so expensive to produce!

You experimented with a remix of Whispers last year. Is there going to be more of that or was that a one-off experiment?

I’m good friends with Claremont (AKA James Green, who played bass in Manchester band Spring King) so I’m sure we’ll be making music together again soon. That came about really because James loved the original track and had a fab idea for his remix – and evidently paid off with a play on Radio 1!

I also have a couple of collaboration projects in the works, which I can’t quite go into yet…

Is there a James Holt album on the horizon?

I’ve been thinking about this quite a bit recently. I have an idea of what tracks may feature on it, I have a lot of songs I could use but I think the headscratcher will be getting them to work together cohesively.

I have another single in the pipeline, more gigs (next one is 23rd March at Manchester Academy 2 supporting Prose), perhaps some festivals. And I’ll be going back in the studio to write / record some more music.