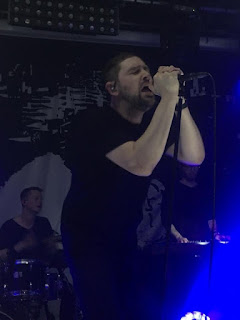 The triumph of The Twilight Sad hitting the top twenty with their It Won/t Be Like This All The Time felt like a vindication of the band’s decade and a half struggle to get the recognition they deserve. We caught up with them at a sold-out show at Manchester Gorilla to watch them deliver the album in full.

Achieving success is far from why The Twilight Sad do what they do though. Attending one of their shows is an intense experience where the walls of the venue feel like they’re closing in, pushing you towards the band, being sucked into James’ own personal vortex of self-evaluation and fighting the demons in his head that come out in the songs as if they were your own.

That feeling of catharsis is ultimately what makes The Twilight Sad such a unique band; where the heavy accent on James’ vocals would ordinarily put people off outside Scotland (where the album hit number one as opposed to the UK-wide seventeen), here it merely emphasizes that these songs are intensely and unequivocally personal in their soul- and mind-searching.

Not even success, and the sold-out signs weeks in advance on this short tour including a sold-out in seconds night at their spiritual home of Glasgow Barrowlands attest to what this is, can change them though. James talks of the nervousness of playing the new album, and they play all eleven songs from it, before telling us “you made it for us, you made us a wee bit happier” before caveating it with “you’re never going to get us out of the shite miserablism.”

He comments on the “mad bastards” jumping around when “I’m the mad one” and precedes Cold Days From The Birdhouse, from their debut Fourteen Autumns and Fifteen Winters, by admitting he used to hate people singing it back to them, but now doesn’t want to sing it on his own. Later when the venue raises its arms to salute Frightened Rabbit with their cover of Keep Yourself Warm, it’s one of those moments that shows just how many of us are held together by music and the connections and bonds it helps us form. This is music that means something; and to some people, the bouncing hordes down the front in particular, everything.

The tight claustrophobic surroundings of this railway arch are the perfect place for this night. Searing heat and volume just on the precipice of distorting combined with a lighting set-up and smoke machines add to the tense taut edges of these songs. The songs from It Won/t Be Like This All The Time in particular take themselves out of the modern day equivalent of the bedsit miserablism of the nineteen eighties and feel like they’re the most appropriate response to the depersonalised nature of the crumbling fabric of modern society. The music hits you, leaves you reeling but it tells you it’s OK not to be OK and beneath the veneer and shields most people are not OK.

That we’re unlikely to see them in such intimate surroundings in the future as they’re set now to spread their blackened broken wings makes tonight feel like even more of a privilege. While indie kids chase insta hits, spotify numbers and the most wacky haircut / shirt combo and the heritage culture sees queues over the road at the Ritz for a sold out orchestra take of Arctic Monkeys debut album, The Twilight Sad are at the vanguard of bands keeping the tradition that music is as important to life as oxygen.

The Twilight Sad played [10 Good Reasons For Modern Drugs], Shooting Dennis Hopper Shooting, Girl Chewing Gum, Last January, The Arbor, VTr, Reflection Of The Television, Auge/Maschine, Sunday Day13, I/m No Here [Missing Face], Cold Days From The Birdhouse, There’s A Girl In The Corner, Keep It All To Myself, Let/s Get Lost, Videograms, The Wrong Car, Keep Yourself Warm and And She Would Darken The Memory