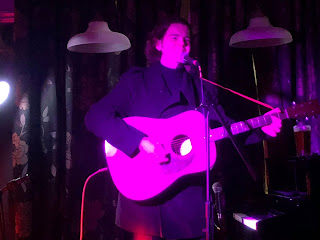 Thomas Haywood of The Blinders played the first of a new series of infrequent one-off acoustic performances by members of established Manchester bands at the newly-refurbished Burton Arms on Swan Street in Manchester on Sunday night. Mixing tracks from the band with covers and his own solo compositions, the evening gave a different insight into one of the most intriguing bands on the scene at present.

When you talk to most people about the Burton Arms, it's the United pub next to Band On The Wall that has ridiculously loud and even worse sounding karaoke and is a place to avoid. And maybe in the past that was true, but under the ownership of the people who've made Night People one of the best venues in town overnight changes are very much afoot. Tonight's event, labelled The Back Door by our compere because entry was only via the beer garden, is the start of their plans to transform the place into a go-to location for music lovers in an increasingly homogenised Northern Quarter bar scene.

It's a very strange sensation seeing Thomas without his black face paint make-up and without Charlie and Matty in tow, although they're in the audience to provide moral support. You sense that Thomas feels a sense of unease about this too as he looks more confident playing his own songs in the second set than he does the songs that have made him and his mates' name over the past two years. But it's always been our contention that truly great songs of whatever genre are those that can be torn apart and put back together in a completely different context and survive on the weight of their own excellence. That's exactly what the likes of Brave New World does, even though he half-jokes that he's started with a cover of Dylan's Ballad Of A Thin Man that he's insecure about playing his own music.

He follows it with Rat In A Cage and ICB Blues which reveal a vulnerability behind the strident full band versions that it's impossible not to warm to. We're treated to a song called Acid Bath Princess Of The Dark, the first song they recorded during the album sessions for Columbia, but which hasn't yet seen the light of day and he finishes his first set with Ramona Flowers, which he finishes amusingly by changing the last line to Austin Powers rather than the song's title. Amongst friends and band devotees, it sends smiles across both his and our faces. 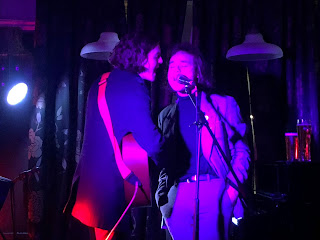 The second set starts with a song called The Darkest Thing I Ever Did Feel with long-term friend John McCullagh and there's a real warmth between the two that feels perfect for these intimate surroundings, where people sit and listen to music they've probably never heard before and connect with it, which is the intent of these nights rather than the vapid irritating chatter of other places.

The rest of the set sees Thomas reveal four of his own compositions - Gift Of Gold, This Phantom Love, Visions Of A Niece and Grave Of The King - that both possess the descriptive elements of The Blinders songs that make them so thrilling but which also you understand why they've not progressed to being recorded by the band as they're less confrontational in their nature, although the reference to lunatic preachers of Notre Dame in the latter might suggest otherwise. Interspersed in them is a cover of Thomas Van Zandt's Waiting Around To Die, that Thomas adapts to reference a Manchester bar mid-song before he laughs at forgetting one of the lines before resetting himself.

He finishes with a huge grin across his face, perhaps partly through relief of getting through a set without the mask that the band affords him, but the response from the crowd tells its own story, as much in the silence that his performance is afforded as in the rapturous applause at the end of each song. For both artist and venue the night is a success.

The Blinders' website can be found here and they are on Facebook and Twitter. They play Birmingham O2 Institute (April 26), Manchester Ritz (27), Glasgow St Lukes (28) and London Scala (30).

Email ThisBlogThis!Share to TwitterShare to FacebookShare to Pinterest
Labels: The Blinders, Thomas Haywood