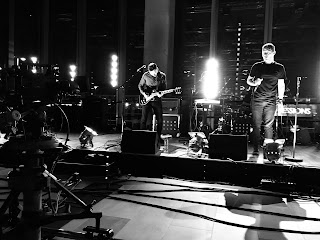 Broadcast on BBC Radio Scotland, The Quay Sessions is Scotland's premier live radio programme. Over the past few years, an illustrious list of artists have recorded sessions. Stuart and Ella Ralston were there to catch The Slow Readers Club play their first show of 2019.

Veteran Scottish band Astrid opened proceedings tonight with a well received set, playing old songs from their three late '90s / early '00s albums, including their Edwyn Collins produced debut album and many new ones from their new LP due “sometime in April”. William and Charles share vocal duties and banter throughout. New single Poison Reaction is one of many highlights and is released next Friday. Their songs lie somewhere between The La's and Teenage Fanclub and on tonight's evidence, their new album is going to be very special indeed.

The two stage set up means there is no need for a change over and in no time at all, The Slow Readers Club appear (or Slow Readers Club as host Roddy Hart insists on calling them throughout the night, other than that he was a charming compère). Start Again gets the show underway and it's a powerful, solid, assured start and a great relief to both band and audience to hear them sounding so good as singer Aaron Starkie has been suffering from a throat infection all day; he tells me later that Astrid helped him out with some Vocalzone. As you'd expect from a TV / radio recording session, the sound is crisp and clear. Every note from Kurt's guitar and vintage Vox amp sounds incredible. There's only a vocal PA in use tonight and as such the sound seems more immediate and raw.

There's no time for chatter as Jim Ryan's thundering bass gets Forever In Your Debt underway. That bass, drum and vocal opening verse has never sounded so haunting before Kurt's guitar kicks in. Incredibly, Aaron is still going for some big notes despite his throat issues. Other bands might have had a rethink, playing softer, gentler songs but the Readers are here to showcase their wares and don't waste the opportunity, rolling out their big hitters and sticking to their A-Game. “I've been struggling with my throat... so if you hear any alternative notes, I apologise” Aaron announces to the audience, most of whom haven't seen the band before, before they launch into his “rant about the state of the world,” Lunatic. It's delivered at its usual frantic pace and is loved by the assembled crowd.

Supernatural follows which Aaron said was “a tough one” as it finishes. But, you'd never know and they played it with 100 per cent conviction as always. “Love song of sorts” You Opened Up My Heart sounds beautiful. As they approach the 'Believe... section, drummer David Whitworth controls the pace and the atmosphere and it sounds magnificent. 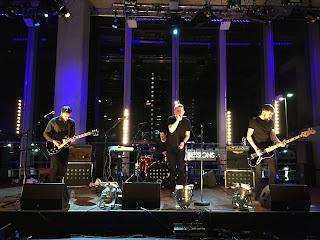 Aaron calls Plant The Seed his “Jimmy Somerville moment” and admits that the song could go either way. He needn't have worried however as his voice holds its own. Block Out The Sun sees Aaron back on keyboard duties and is the only debut album song to be showcased tonight, highlighting their older, slightly darker style, yet still retaining an uplifting, anthemic sound too.

On The TV for many in the room, including Ella,  is the highlight of the show. A vibrant I Saw A Ghost is the last 'Readers song to be played during tonight's forty-five minute set. As is customary when recording a session for The Quay Sessions, bands are asked to cover a song by a Scottish band. In true Manc style, the band decide to play a Rihanna song! However, there's a twist as it features Scottish “DJ” Calvin Harris. Five seconds in, and Aaron discovers his keyboard and computer need fine tuning so the song abruptly stops, with Aaron joking that he needs to email his mum as he quickly resets his laptop. I'd never heard We Found Love before but it's delivered in a true Slow Readers way – masterful riffs from Kurtis, stomping bass from Jim and powerhouse drumming from David.

The prestige of recording a session for the BBC is not lost on the band and they relished the opportunity. A career spanning set with some of their biggest tunes thrown in and a great cover to round the evening off, they could have played it safe given Aaron's health issues but they delivered in style.  A fantastic evening.