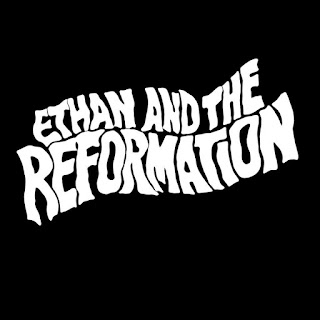 Wild-Minded Woman, released late last year, marked the comeback of Ethan And The Reformation just as we thought we might have lost them for good. But they're back with a new line-up, a new ethos and a change in style. Julia Grantham caught up with them just before Christmas at their packed-out show at Jimmy's for a chat.

I first discovered Manchester-based Psychedelic Rock band Ethan and The Reformation almost by accident. Back in October 2015, I was nervously interviewing friends of mine, Cupids, by the bar at The Brudenell Social Club in Leeds as part of their tour with now international super stars: Blossoms. During part of our conversation, I asked the band if they’d like to give a shout-out to any other up-and-coming bands and along with Hot Vestry, Ethan and The Reformation were mentioned. If I remember correctly, Sid Cooper of Cupids told me Ethan was ‘very sexy’ and even though he was joking, I came away thinking that I must check this band out!

It took me a little while, but after seeing Ethan and The Reformation support Cupids at The Deaf Institute in Manchester in December 2016, I interviewed them for the first time at the one and only When In Manchester metropolitan festival in April 2017, and not long after, everything went mysteriously quiet. I could scarcely believe that a band this good, with such charisma, talent and an ever-growing fanbase would stop performing, take a pause from writing music and, well, seemingly disappear. But they did.

Fast-forward to January 2019, and Ethan and The Reformation have made a remarkable comeback with single ‘Wild-Minded Woman’ (see an earlier review on this site) and played to a full crowd at hip and trendy Northern Quarter gig venue Jimmy’s just a mere 3 days before Christmas 2018. And so now it has been my turn to go quiet for a few weeks. I have been sitting on this interview for a month, but now is the time for it’s big reveal. What a night this was: to witness live music at it’s best after a what has certainly been for me at least, a wait worth having.

Walking in to Jimmy’s on a weekend night has come to be a regular thing for many. It has become as as familiar to its regulars as it is crowded, full of friends, acquaintances and it usually always plays host to bands that people on the scene want to see, want to know, want to be like and want to be associated with. Jimmy’s has the best lighting, the best kit, but it’s almost a bit too good for the size of its stage and its limited capacity, and as such and even though bands on the up will quickly outgrow it, you cannot beat as a customer, the chance to see bands and artists play here: it’s exciting, it’s a privilege and this band: Ethan and The Reformation, were no exception to this precedent. In fact, bar co-owner George Craig of One Night Only fame and fortune took to his own stage this night, to replace Thomas Gorton on drums.

Jack Wakeman, former keyboard-player-turned-bassist in the band, appeared nervous to be opening the evening with his solo material, yet played a confident set of five songs as Jack Oliver Monty, his solo artist alter ego. Perhaps his nerves were due to the fact that he had only found out moments prior that the support band had cancelled, and so with little choice but having had no chance to prepare, he played us a lovely repertoire of tracks including his recent single The Garden, which Even The Stars has reviewed recently as part of his newly released 4 track EP. Taking the stage with just his guitar, the audience cheered, clapped, listened and enjoyed his music as if they had known he was going to be there all along, and rightly so. I turned to my friend to ask her what she thought: “He’s really good, isn’t he?”, was her reply.

And when Ethan and The Reformation took to the stage? It seems strange to say it, but even after over a year of not performing as band, Ethan and his bandmates makes it look oh so easy. His ability to engage and entertain a crowd appears effortless. He’s cool, but in an understated way. Each song flawlessly played, from the well-known and much-loved hit Hollandia to new single Wild-Minded Woman, the room was buzzing. And not just those of us dancing and singing squashed up at the front. I had set up my interview back in the summer and I couldn’t wait to hear what Ethan had to say about the band, their new single, their first performance and the scene today. So after the gig, all thrown together along with the band’s girlfriends, fiancees, friends and a few randoms, we squeezed into the tiny office in Jimmy’s, where we couldn’t really fit, and had a chat.

After discussing the band’s favourite Christmas songs: ‘Last Christmas’ by Wham is Mick Mac’s (Guitarist) and ‘I believe in Father Christmas’ by Greg Lake is Jack Wakeman’s (Bassist) we got down to some proper questions. Responding to the question “Why the big silence?” Mick’s fiancée Kate exclaimed “I got pregnant” almost at the same time as Ethan confessed: “I lost my mojo.”. So, practical and artistic reasons explained the gap in production and performance and two very plausible and understandable ones at that.

Ethan went on to explain further: “Our old stuff was very tripped-out, psychedelic stuff and I hadn’t really been in that space for a while, and felt a bit kinda removed from it, like it’s not coming, it’s not happening for me, and I lost touch with that, that ‘it’s ok, the universe will always will out work’ kinda thing and I then I stepped back from that. I thought hang on, time’s moving on, the world’s moving on without me, I’d better pull my fuckin’ finger out and do summat”. Of the change, the return to music, this was partly due to Ethan working behind the bar at the very venue in which we were conducting this interview, after the band’s electric performance. Turns out, that seeing other bands play here was was part of his inspiration to get back out there. “We got a new line-up, a new direction and it all kinda clicked into place and we feel like now, we’re ready to launch our assault on the world”. Exciting times.

Keen to know what we can expect next, after a very successful comeback gig, and having chatted to excited fans outside after the band walked off stage, Ethan told me this: “Expect more of the same. It’s back to bluesy rock n roll roots- as proud as we are of those seven-minute-psychedelic-odysseys, we’re not in that place now; we’re doing something that’s urgent, it’s something people can get on board with more, cos that’s what’s coming naturally to us, where we’re at now”. “Mick Jagger summed it all up once, (Mick Mac) it’s all in rock and roll- but we like it”.

It may interest readers to know that, next? Well they’re all currently in South-East Asia, among other places- the banks of the River Kwai, to celebrate the wedding of Mick and Kate, where the band will perform live. See below for the links to all the band’s socials and you may see hints of this on there! We can expect Ethan and The Reformation to be back in the UK in the late spring where gigs, festivals and new songs are all on the agenda so keep your eyes, ears and senses open people. This band will keep you on your toes, change, go quiet, come back, and evolve. If ever there were a band to get behind with the ethos: do what you want and own it, this is the band to follow for that reason, and if not? Well, the music is pretty great too.

How does a psychedelic-cum-rock-n-roll-bluesy band fit into the current Manchester music scene in 2019, then? This opened up a huge discussion around what other bands may or not be doing, how there are scenes within scenes, and trends that work for some bands, historically and now, but perhaps not for others. Essentially, Ethan and The Reformation are a band that know who they are, what they’re about, what they love, what comes naturally to them and that’s what they’re putting out: themselves- encased in honest guitar music. I asked: “Should we all be going back to the 70s then, listening to that kind of guitar music?” Ethan answered: “Not necessarily, but we all draw from that time where it was all guitar-led, melody and hooks, and we focus with our live set on the way the tunes stand up. We give a bit back to our audience, yeah, but without thinking : are we gonna be the craziest band around”. I wondered if Ethan was the main songwriter. “Lyrically definitely (Mick) but musically it’s all of us, really”. With the latest single, Wild-Minded Woman, the initial idea was “A very swingy midnight ramble” according to Ethan, but after a few plays with the band it came out the better for it”.

Having had 22nd December 2018 firmly in my outlook calendar since that very first hint of this gig as it appeared on social media back in August, I have to say that it could not have gone any better. I was so happy for the band, who had scarcely rehearsed for it- they hadn’t the chance- the excitement filled the air before, during and after, and even though you read this kind of statement all the time: 2019 will surely be a great year for Ethan and The Reformation. Follow them on all their socials for more: festivals, gigs, new singles and world domination. It won’t be their fault or mine if you don’t.