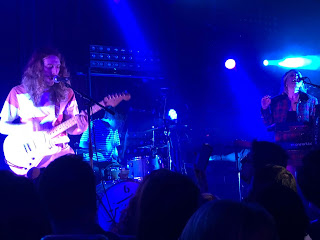 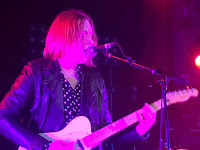 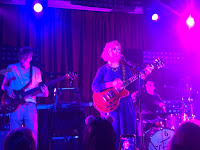 Just fourteen months since their first shows, Fuzzy Sun have sold out Gorilla ahead of a headlining tour in May that's sure to see their star rise yet further. With a set taken from their first two EPs and a whole raft of new material, they had the packed crowd eating out of the palms of their collective hands and singing along to drown out Kyle at times. Support came from Rory Wynne and Solis.

The only time we'd seen Solis previously was opening for Blossoms at their secret Yes show and the acoustic performance was drowned out by ignorant chatter from the crowd. There's no such problems tonight as the growing crowd listen attentively to her beautifully crafted songs that really bring out the shine in her rich evocative voice. 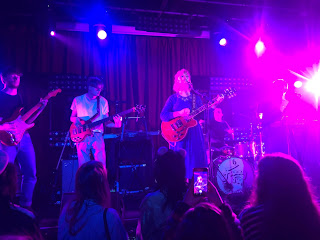 Songs like Spirit, Home and in particular Osmosis from her debut self-titled EP that appeared last year aim to seduce you rather than blow your head off, constructed to lift you up and hold you up there. The two new songs - Sunday and Scenery from the album that she tells us she's in the process of recording - come from a similar place where there's no shortage of harmonies and melodies at play here where others rely on sheer adrenaline which make Solis a refreshing change.

Rory Wynne is a young man who's never been short on confidence and his set tonight is brimming with it as he prepares for the release of new single Getting Over You this week as his prolific streak seems no sign of abating. He opens with Star In The Sky and struts the stage like the rock star he should be, ultra-confident in his ability and the prerequisite arrogance and self-belief that you need and the crowd respond well to him 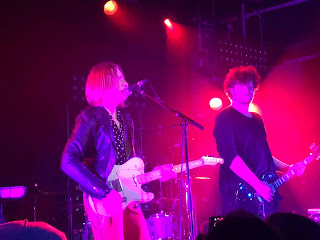 Friends, Picture This and Let's Have A Party are ramped up in intensity, trading the songs' hooks for something more direct and powerful with samples thrown in at the start too. That new single Getting Over You is prime-time Rory but with an extra edge to it that comes through on this first live performance. Rory makes full use of stage throughout and finishes the show amongst the crowd who part to let him through to the back at the end of a half-hour that again has us scratching our heads as to why he's not heading up bills in places like this.

Fuzzy Sun's rise has been helped along the way by their association with Blossoms, of that there can be no doubt as the familiar faces of the first few rows confirms, but this is the night that they stepped out of that shadow once and for all and laid down their own marker for any upcoming band in Manchester to try and match. This was an assured confident headline performance and if they had any nerves playing their biggest headline show to date, they didn't show. Kyle has blossomed into a front man of some style, losing himself in the music with his own unique dance style, demanding that we turn our volume up to eighteen between songs, ending up at times on his knees at others roaming the stage to connect with his bandmates, particularly guitarist Raffaele at the points where he grabs the songs and lets loose. 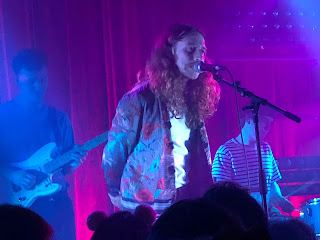 Their eleven-song set takes in three songs each from their two EPs to date - Want Love and Warm Evening / Cold Morning - plus five new ones, including the live debut of the sumptuous Gentleman's
Touch and the surely future single Dancing Fool. They're at their very best where Kyle and Daisy's vocals come together and we've transported thousands of miles away to sunnier climes, but in the short time together they've already forged an impressive setlist for nights like this with the promise of much more waiting to be revealed as they make the next move forwards. 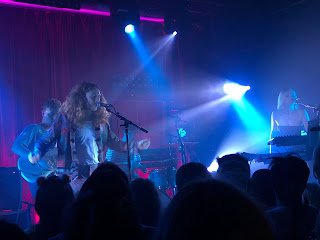 By the time we get to the final duo of Want Love and Come Take A Bite, they've got the audience exactly where they want them. Kyle doesn't even have to sing most of the two songs should he choose not to as the audience know every single word and take control and it feels like something of a defining moment, something that the deafening roar at the end of the set just confirms to us. This was a triumphant coming of age, the night Fuzzy Sun declared themselves to the world and six hundred people danced to their tune.

Rory Wynne's official site can be found here and he is on Facebook and Twitter. He plays London Water Rats (March 1), Brighton Hope And Ruin (2), Birmingham Actress And Bishop (15) and Manchester Jimmy's (16).