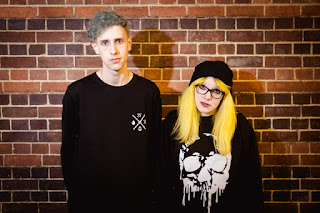 One of our favourite live bands SKIES are returning to Manchester at the beginning of next month for a gig at Night People as part of a headline tour. We caught up with Alie and Jericho for a chat about their most recent single Can't You Save Me, spreading the word and new music on the way in 2019.


Hi SKIES. It’s been eight months since we last spoke. What’s been happening?

Alie: Hey! Yeah it’s been a little while! Since we spoke, the title track of our ‘X’ EP featured on Spotify’s ‘New Music Friday’ playlist and ended up on ‘The Only Way is Essex’ which was pretty exciting for us. Off the back of our EP we went out on a UK headline tour, the ‘X’ Tour, and had a great time in Leeds, Southampton, Nottingham and Bristol. We then released a music video for the last track from the EP, Can’t You Save Me? which was a great way to round up the year. Since then we’ve been preparing for our UK headline Spring Tour and been back in the studio…

You released a video for Can’t You Save Me off your X EP towards the end of last year. Could you tell us about the idea behind the video?

Alie: Can’t You Save Me meant a lot to us during the writing process, as we were both asking a lot of questions about life, existence and religion. For the video, we came up with the idea of being held captive by a cult and struggling to be freed. The cult represented a few things - vices, questions, doubt, addictions, among other things, and we wanted to come across as trying to escape all that.

It worked really well with our artwork, moving on from the ‘X’ design to the Crucifix design, we felt creating a cult vibe from that could work well. A lot of effort went in to the props and it was really good to see it all come together for the video.

Jericho: Adding to that a bit, when you find you can’t live with the vices anymore, you find yourself pushed to a point of fight or flight. We can either blame other people or ideologies for our failings or can choose to look at ourselves as the cause of some problems. Saying that, we’re not sure if we chose the correct ending for the video!

Alie:  Also, quick shout out our good friends ‘Visual Line’ for helping make it all happen!

We’ve noticed on social media a lot of fans crossing over after your dates with The Slow Readers Club in the past couple of years in the same way as they benefitted from the James connection. Does that feel like some vindication of what you’re doing?

Alie: It’s been amazing to tour with The Slow Readers Club, the past couple of years! They have some of the most amazing fans, it really does feel like a family and it’s been really inspiring to watch them and see what they’ve achieved since we first played with them a couple of years ago. We’re so grateful for anyone who comes along to see us at one of our shows and it’s been amazing to have some of their fans get on board with what we’re doing. I think vindication has been more to do with having the opportunity to play some huge venues with them - it made us realise that we really do feel at home on big stages - and we hope to spend more and more time on those!!

Those posts often include your visually striking merchandise. Do you design that yourselves?

Jericho: Yeah, we enjoy having total control over our merch! Alie is an amazing graphic designer and can put any idea’s we both have into visual form. We’re lucky enough to work with the awesome brand ‘The Quarter Masters’ (who print all my clothes) and they print all our merch for us. We’ve enjoyed opening up our merch line to include our song artwork and tattoo’s lately.

You’re coming back to Manchester next month, a city that’s always welcomed you. Are you looking forward to the gig?

Alie: We’ve always loved Manchester, we do feel that there’s something special about the place - seems like a second home - and that’s why we wanted to play this show there. We’re all the way from Kent but it felt like a great place to come and play so we’d love to see some of you guys there!

Are you writing new material - and can you tell us what it sounds like? Will there be more releases this year - another EP or even an album?

Jericho: We’re always writing material and pushing ourselves forward which always excites us! We’ve just finished recording some more material due for release this year. As we always try to do with our songs, we’ve taken what we do and tweak it, improve it and tighten it. So hopefully new material will sound like a tighter, fresher version of us!

Alie: It’s even more exciting to write now as I feel at a bit of a crossroads - with 3 EPs under our belt we feel we have established who we are as a band and what we’re about, so we can build on that now. I feel more free to try ideas that I might not have tried three EPs ago and it feels good to explore a bit more…

What other plans do you have for this year?

Alie: It’s been great to start the year with a tour and play the new ‘X’ EP tracks, give them a good run around. After that, we want to tour more, would love to jump on a few more support tours and festivals and will have even more of a focus on writing I think. We’re just excited about being a band and doing all the things a band should do! Hopefully we’ll see some of you along the way this year…!