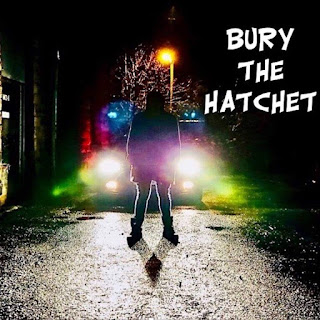 A newly reinvigorated The Maitlands have just launched their second EP Bury The Hatchet with a new line-up and a seemingly more focused approach to their art. We caught up with front man Carl Ingram for a chat about changes in the band and the tracks that make up the EP and the inspiration for his lyrics.

The Maitlands have undergone a number of line up changes over the past year, so who’s on the EP and is that your current line up?

Yes that's right, We have gone through a few changes. Thing is, when people haven't got the time to commit, it's time for a change. I had this EP planned for earlier last year but we did a couple of songs meant for it which we ended up putting out as singles. I wanted all the same band members on the full EP. Ste Ackley, Matt Bryne, Saul Gerrard, Francis Moran and myself have been solid now for over 6 months.

How has all the change impacted on the band’s structure and how you write / record / work together?

Up to now we've been writing in the same way. I do the lyrics and and Francis writes the tunes. We tend to structure them together. The Imput from the current band though is crucial in our sound. They each add their own style which I am personally really into. Biggest change is that we all get on.

It feels, from the outside looking in, that you’re taking this more seriously now and adopting a more professional approach without losing the uniqueness of The Maitlands. Would you say that’s fair comment?

Yeah I'd say that's a fair opinion from an outside view. I suppose it's at the level I've always aimed for. I'm enjoying it more than ever. We are definitely more organised. Every member of the band gives it their all and because of that we are busier than ever.

Could you tell us a bit more about the songs on the EP. Starting with Dangerously Sober

Dangerously Sober I started writing when I gave up the booze for a few weeks. I found I started picking up some obsessive behaviour that i'd not experienced for years and it got me thinking about how people take up other addictive hobbies when they pack stuff in...like Jim Davidson found God apparently. The line 'like a couple of teachers playing to disinterested kids' is actually what I thought when I saw Francis play the guitar riff to the old band members for the first time. So I got that line straight away then adapted it.

She's a Ghost started out in Ashton-Under-Lyne Market...every day I went to get a coffee I would see these characters. So I started to paint a picture out of some of the locals..'Vladimir the butchers daughter' and 'Inappropriate Joseph' amongst others. The song came alive when I was talking via text message to Nick Alexander from Politburo. Spell check changed his word to 'Lyn'. I said "who's Lyn when she's at home"

He said "sure... maybe times are hard for Lyn...but she still walks like a lady"  he wrote that intro and we took it from there.

Kisses For The Masses

Kisses was wrote in a different way than our usual style of writing. We've done it before but it takes some skill on Francis's part. I came up with the lyrics and tune and sang the whole thing into my telephone. Franky then sticks it onto his computer and just wrote the music to my voice and melody. It's about advertisement companies selling us love..whether it be through ads in a paper or dating apps..nothing wrong with it. I just can't escape the ads. 'Make sure to press like and subscribe'


I Can Not Complain

Can't Complain started out with a simple idea as I'm well into landing my words in a very percussive style. Using a very repetitive line like this allowed me to get in there with Saul on drums. Most of the lyrics are things I hear the mothers telling their children outside the school when I'm picking my kids up. Wrote when I wasn't in work as you can tell by the line 'daytime TV will be the death of me'. Good song..goes down well live.

Daunting was a long time in the making. I had these lyrics that i'd half stolen/half wrote while I was stuck on a tram after finishing mixing the first EP on my way to Derker which is the tram stop near my house. I live on Shaw road estate..when I say 'you look so Daunting from Derker' I'm actually looking up at my estate as there's never any street lights working. Most of the lyrics though thankfully came from this drunk fella who was saying to me "it's like that song isn't it" "stranded, stranded". I thought I haven't got a clue what you're on about mate but I can write one for you.. he said all that stuff. Crime on the line, and he's on his way to bury the hatchet..I just repeated it in song form. Hopefully it's helped out the Derker tourist trade anyway.

What made you choose Bury The Hatchet as the EP’s title?

Following on from our first EP 'Salford Democracy' I wanted to call it something that meant something to the bands roots.  We rehearsed at the time in Bury and I knew I was sticking 'daunting' on the EP so it worked right. We now have a room in Mossley where all rehearsals start with an hatchet.  First 30 mins chopping wood for the fire as it's bleedin' freezin'.

What have you got planned for the rest of the year?

The plan is to keep gigging as much as possible all over. We have most of the year booked up already. Festivals booked in the summer which will announce in due time. Back in the studio doing a single a B-side in April so that will be out in May. Just keeping busy is the plan really. Onwards and upwards.

The EP is available on their Bandcamp