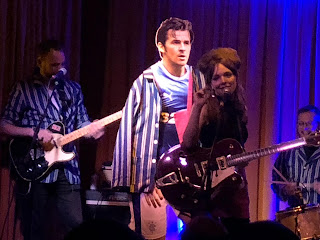 Emily Capell opened up her run of shows on Thursday night, previewing tracks from her forthcoming debut album as well as revisiting some from her previous EPs and introducing a very special guest to accompany her band of "Kardashians."  She charmed a Manchester crowd with her North London humour and songs that found you nodding your head and tapping your feet to before they even reached the chorus.

Opening up was Richard Lomax of Granfalloon, who was in the building to do sound for the night but stepped in at the last minute after two support bands pulled out. Introducing himself just as Richard and borrowing Emily's guitar to play electric guitar for the first time in years, he plays four songs that have the audience warming to him, in particular a song he calls "pure filth" which basically says fuck everyone before they can fuck you over. The fact he's unrehearsed doesn't show at all even through his modesty and the songwriting quality of the other three songs Wag, Glamour and Sleep shine through despite the unusual setting for their performance.

By the end of her first song 101 Walterton Road, Emily is already laughing and joking that she;s won the competition for most fuck-ups in the set over her band members. She seems surprised that so many have come out, but her reputation has preceded her with sets at Head For The Hills festival and Jimmy's last year and these often tongue-in-cheek sax-drenched songs about growing up, messing up and idolising footballers and musicians do her bidding for her, helped by her bubbly, self-deprecating and inspiring personality. She rants at people who wear band t-shirts but don't know the songs on No Worries, taunts someone for driving a Skoda on Ipso Calypso, asks us not to judge her about wanting to find a footballer to marry her on Footballer and later brings forward a life-size carbon cut-out of Joey Barton who's come all the way from Fleetwood on her tribute to the controversial midfielder. 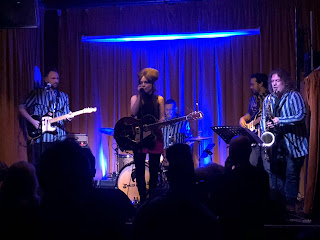 She tells us Until Monday is about foodbanks, but caveats it by saying she added in how much she loves Danny Dyer to make the song more palatable to those who don't want political songs, whilst Twisting On The Waves has a much starker message about the death of Sam Cooke and racial undercurrents in America, urging them to "sort out your President" in a North London twang. She finishes her main set with Bonanza, a magically upbeat track from her last EP Who Stands With Latasha Harlins? and a song that should have got her further recognition than she has. Most of the band depart for an encore of a stripped-down Who Killed Smiley Culture? to finish off the evening.

With an album coming out later this year, six years after her first release, it's been a long hard slog for Emily to break down walls and smash through ceilings particularly as she very much refuses to conform to stereotypes. She's articulate in her own way, her songs and performance are both serious and humorous at the same time and are a lot of fun. The crowd's response to her is warm and engaging and gets louder at the end of each song and she leaves having captured more hearts and minds along the way.