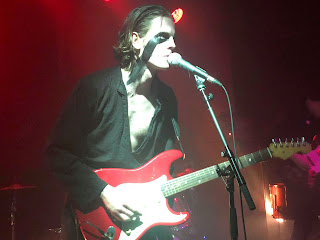 The Blinders kicked off 2019 with a sold-out show as part of Independent Venue Week as they seek to build on the success of last year’s Columbia album and start the process of its follow up. Support came from The C33s.

The C33s describe themselves as a punk/garage/rock band and their sound is as unflustered and devoid of bluster as that would suggest. There’s a rawness to Cav and Judy’s vocals that matches the primal nature of much of their set, especially when they extend outros to songs later in their set and they feel like they’re having a jam together. They don’t say much, to us or each other except Cav’s constant references to juicing, but there’s a very intuitive feel to their sound that does their talking for them. With their debut EP 48 Hours At Neon Palms already out and a single coming in March, they're starting to get some momentum behind them. 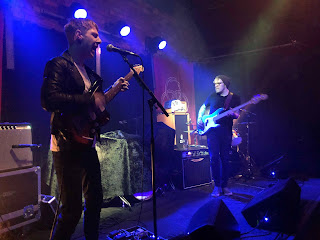 Within seconds of the opening bars of Gotta Get Through, which follows their opening poem Columbia set to a rumbling backing track, there’s a moshpit developed with blokes throwing themselves around and sending the rest of us back to the sides. It’s interesting that they create both the adrenaline rush that sets that off yet have a message that you need to listen to in order to appreciate on songs like L’Etat C’Est Moi, Brave New World, The Ballad Of Winston Smith and the menacing Hate Song. You also miss the expressions on Thomas’s face, undaunted by the black warpaint streaming into his eyes, across his cheeks and down his neck and chest, as he barks out commands and calls to arms, Charlie’s imperious stances and absolute immersion in what they’re doing or Matty’s often underappreciated drumming that dictates the tribal nature of a lot of what The Blinders do.

There’s a couple of new songs - Wither and the multi-faced macabre menace of Fantasies - that hint at the direction they’re moving in, expanding their sound, pushing their boundaries without ripping up the blueprint that makes them such a thrilling proposition. I Can’t Breathe Blues, Rat In A Cage and Ramona Flowers, three of their older songs, have grown with their ambition without losing the claustrophobic suffocating edge that drew many of their devotees in. 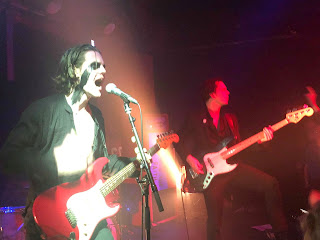 They don’t forget where they’ve come from. They dedicate Fantasies to a long-term fan Zoran who sadly died recently and the roar is as loud as for any song, such is the connections and bonds they’ve created. Et Tu and Brutus bring things to their conclusion, one minute barbaric head-splitting cacophony, the next an almost deific mantra across more than ten minutes of thrilling energy that’s uniquely The Blinders as they plough their own path immune to outside pressures to conform.

That’s The Blinders in a nutshell. Like Ist Ist the night before they’re at the vanguard of a set of bands unwilling to bow to the image-obsessed tastemakers that want no rough edges to their product when it’s those edges that excite these crowds more than anything. They’re at that post debut album crossroads now but the possibilities ahead of them are thrilling.

The C33s are on Facebook and Twitter. They play Manchester Band On The Wall (February 14), Manchester Night People (March 9) and Manchester YANA Festival (30).

The Blinders' website can be found here and they are on Facebook and Twitter. They play Birmingham O2 Institute (April 26), Manchester Ritz (27), Glasgow St Lukes (28) and London Scala (30).

Email ThisBlogThis!Share to TwitterShare to FacebookShare to Pinterest
Labels: The Blinders, The C33s