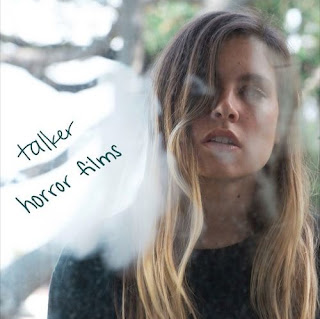 talker, aka Celeste Tauchar, released her debut EP Horror Films last Friday. Ahead of her LA launch show, we caught up with her to talk about the intriguing name, the personal subject matter of the EP, the LA music scene and her plans for the future.

Hi Celeste. Thanks for taking time out to speak with us. Could you tell us how your talker project started out?

Of course! Yeah so I've always been a musician and have been working on some kind of project at any given time. For a long time I knew that I wanted to pursue a solo project and be an artist, but I didn't really know what that would look like. I took a few years after moving to Los Angeles to play a lot of different music with different artists, reflect on my own tastes and passions, and write a lot. Eventually the talker sound organically came out and it all clicked.

You’re using the talker name rather than your own. What made you decide to release under a pseudonym?

I didn't necessarily feel that I needed to release under a pseudonym instead of my actual name, however "Celeste" didn't really feel like it suited the music, despite being my name! I wanted something a little weirder, a little different than just my name so that it would stand out and people would remember. Plus there's already an awesome artist going by Celeste, check her out.

And where did the name talker come from?

So while I didn't use my first name for my moniker, "talker" is actually a play off of my last name "Tauchar". It's not pronounced the way it looks, and growing up it was a nightmare to try and explain to people. I've had my last name butchered so many times, including at my college graduation. Tragic. But even though I chose to not use my actual name, I still wanted to pay homage to it in some way and make it undeniably me.

Changes and Intimidated feel like intensely personal songs and with references to “messing up” very honest and open pieces of self-assessment. Does your music act as a catharsis?

Oh completely. I always say it, but the main thing I strive for as an artist is to be authentic, vulnerable, and real. Not only is it cathartic for me as a writer, but I think at the end of the day people want something they can relate to, and it's reassuring to hear other people tell their stories about their struggles and have that reminder that we all have our issues and it's okay to talk about them.

And Horror Films feels like it’s encouraging someone else to reveal themselves, the line “show me the horror films playing in your head, all of the darkest fears you’ve left unsaid” Are you songs written about specific situations or more generic aspects of the human condition?

This was definitely a specific situation. Ha! I wrote this one with my good friend April Bender, and it was at a time when I was dating someone and was ready to get to that next stage - to move on from the small talk and politeness, the civil first few dates. I tend to open up the dark side of my mind to people very quickly, and I was ready to do that but needed the other person to be there too.

You’ve used the term “grunge pop” to describe your music. That’s two very different genres. Does that come from the music you were listening to when you were growing up?

Definitely. I like how broad "grunge pop" is, because in 2019 genre is a bit of an antiquated concept. We have so many artists nowadays who transcend genre and really just make the music they want to make. So while I think the term is fitting, as I write songs that have hooks but also some grit, it's also loose enough to just do whatever the hell I want. But yes, I did listen to grunge and pop growing up, as well as a lot of female rock and alternative artists who influenced me a lot.

Have you collaborated with other people on the EP or is it all a solo project and how do you translate the songs to live performance?

The EP is all a solo project, but it takes a village! I definitely could not have made the EP what it is alone. I worked with some incredible writers including April Bender, Dan Sadin, and Tim Nelson, producers Dan Sadin (again) and Phil Simmonds, plus drummer Jake Reed, mixers Mike Pepe and Jesse Ernster, and mastering engineer Dave Harris.

The live set is with a full band, and it's a really awesome gritty indie-rock feel that is so much fun to play. I also just love the energy of having my friends up on stage with me. For my EP release show we're building out the show even more to include certain sound effects from the record, and it's going to be really cool.

What are your plans for release - will it be just digitally or will there be physical formats?

This EP will just be digitally for now. I would love to release some vinyls eventually but for now the main goal is to just get my music to as many ears as possible, which is done through streaming. Hopefully for my next release I'll be ready to do some vinyl though!

You’re based in LA where there seems to be a really fertile artist community developing. Are there anyone else you could recommend we should check out?

Oh totally. I'm absolutely going to forget some people because there are just so many, but some incredible artists that I know and love include Dan Sadin, Liv Slingerland, Chanel & The Circus (all three of them are in my live band!), plus Fiona Grey, LeyeT, and Zealyn. But there really are so many - you could go see an amazing show every single night here with all the talent in the community.

A debut release is a big deal for an artist. What are your hopes for it once you’ve set it free into the world?

I know - I'm STRESSED. Honestly it's funny because there's so much build up to the "debut release", but my mentality at this point is that I'm just ready to get it out. I've been living with these songs for so long and have so much new music written that I want to put out, so I'm excited to have these out in the world so people can get a first taste, and my hope would just be that they reach as many people as possible and can mean something to someone. And we can grow from there.

And do you have more releases planned?

Definitely. No set date yet, but I want to keep the momentum going so the hope is to start putting out more music in just a few months! No plans to slow down anytime soon.

The EP is released today. Our review can be found here.