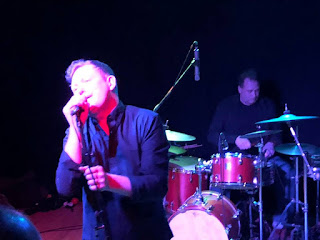 "This one's called Further, we're going to go further" Andrew Montgomery towards the end of Geneva's first live show since May 2000. In front of a packed room of friends, family and fans that had held their flame in the intervening years, a four-piece Geneva delighted the crowd with a set of songs taken from their two albums Further and Weather Underground.

There's two types of band reformation. One is cash chasing, the other is bandmates reconciling, their lives coming back together at the right time to both relive what they did and to look forwards. With all respect there won't be people throwing thousands of pounds at Geneva or sold out Academy shows round the corner because record company issues around the time Weather Underground cut them off in their prime and ultimately split the band. Looking at the setlist of twelve songs, they're split seven / five in favour of Further-era tracks, but the selection is an intriguing one, picking songs that reignited their fire rather than the obvious, meaning there's no place for three of their six singles (Best Regrets, Dollars In The Heavens, If You Have To Go).

Much of the focus on Geneva as they hit the charts in the halcyon days of Britpop was on Andrew's voice which stood out a mile from his contemporaries and made their lumping in with that movement more to do with their association with Suede's record label Nude than musical similarities. That voice has stood the passing of time and still makes the hair stand up on the back of the neck as he effortlessly soars into the higher notes, which he demonstrates when Steven's pedals fail before Tranquilizer and he exercises his voice. Into The Blue is another such moment, introduced as "This is one of our hits, you can sing along if you want" and the room do just that singing it back threatening to drown Andrew out and reminding us that they did once look like they could take over the charts. The final song before the encore, Tranquilizer, gets the same treatment - "the let us be happy while we're still young" still applying as much today as it did back then. 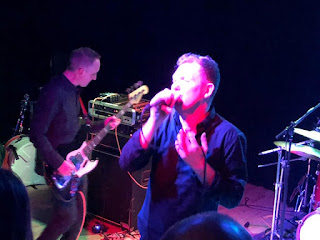 The chemistry that bands need is there in spades. Whilst they're missing guitarist Stuart Evans, who lives in the US and is mentioned along with a couple of friends lost in the intervening years, the remaining four - with Douglas Caskie on drums, Steven Dora on guitar and Keith Graham on bass - have very clearly formed a very tight bond, both on a personal level as well as musically. Mid-set Andrew reflects on the time it's taken them to come back together by telling us "Nights like this make us think you realise we've wasted a lot of time, but in other ways it's the right time" and it's impossible to argue with this logic. The hints at new material, which is for another day of course, merely confirm that.

Andrew modestly claims at a few points that the next song could be a mess, before they deliver it almost faultlessly. There's fist-bumps, gentle ribbing at the time taken to change guitars and knowing smiles throughout. That allows them to deliver some of the more expansive tracks from the Weather Underground era like Museum Mile and Amnesia Valley where they sought to spread their wings. They finish with Have You Seen The Horizon Lately?, the final track from that album and somehow a fitting finale to the night.

This might not be the most spectacular or most-awaited band reunion that's ever happened, but there's so much love in the room for Geneva. They do the most important thing a band coming back can do and immediately reconnect with their audience and remind us why we fell in love with them in the first place. It promises to be an interesting ride.

Geneva played No One Speaks, Temporary Wings, The God Of Sleep, Killing Stars, Museum Mile, Amnesia Valley, Into The Blue, Further, Nature's Whore, Tranquilizer, When You Close Your Eyes and Have You Seen The Horizon Lately?

Our interview with Andrew about the reunion can be found here.