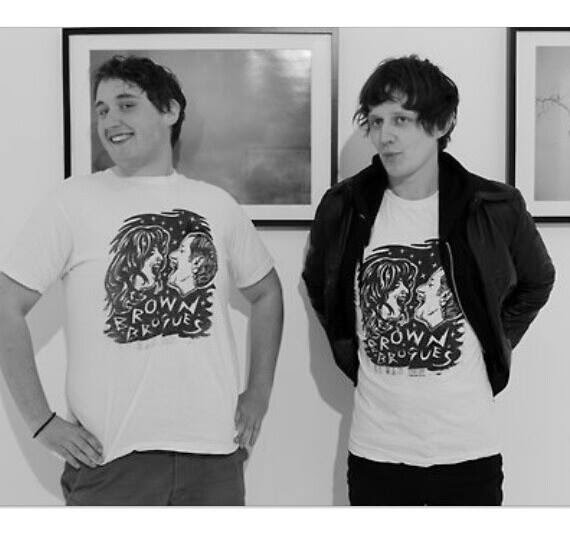 Brown Brogues are releasing four songs as part of a split Cassette Store Day EP with Eternal Summers on Haus of Pins label.  We caught up with Mark from the band to discuss how they ended up in Manchester, their love of unusual formats and their new video which has them playing in a school.

Tell me a little about Brown Brogues and how you got together and ended up in Manchester.

Brown Brogues came to be from me kicking about in Wigan with several bands, eventually ended up playing with Ben when he was home from Uni as I remembered he had a bass in school.

Slowly but surely the less committed fell away/were asked to leave. Ben went to finish Uni as our last band Pout died. I went away to a little tape studio in Darwen and started writing songs that would become Brown Brogues alone I tried out a few drummers and it wasn't working until one day I was hanging out with Ben before a show that the drummer then (sorry can't remember his name) couldn't do it. Ben did the show at the last minute no practice on drums and never left.

At that point more and more shows were coming up in Manchester and then elsewhere. As we became more engrossed in the Manchester music scene we spent almost every night in Manchester it made sense to move here.

Have you always been a two-piece or have you considered bringing in other musicians at any point?

We have considered it and tried it a couple of times it mostly doesn't work in our situation, we tour in a car and are lazy so our tiny amount of gear is easy to move about and set up. Also writing and practicing as a two piece is so quick and easy. Sharing money is easy. There's also less people to argue with.

Saying all that, on Saturday we played a show under a different name to test out a secret bassist and see if we like it.

You describe your sound on your Facebook wall as garage / Jive-o-tonic.  What does that mean?

Mark - I don't know what it means. It sounds funny though but essentially the bands we were in before this one were smart arse aggressive punk bands.

I got sick of trying to wind people up or deafen them, we just want people to dance that's why the music is mostly upbeat, fast paced and simple.

You've been quite prolific releasing two albums relatively close together as well an EP.  Do you write songs all the time and do they come quite quickly?

I have recording gear in the places I spend most of my time (home, practice room and workshop) so I can get something down relatively easy. The only problem with that is finding something specific in the mess of recording quickly in different places .It gets confusing quickly.

What's the idea behind doing the split cassette for Cassette Store Day?

Eternal Summers had been talking to Haus of Pins about putting something out together and Faith suggested doing split and the timing would work out for Cassette Store Day. The Haus of Pins label is pretty impressive. they take their time and do things properly to make sure each release is good and looks great. It's gonna be special

You did do a cassette previously of cover versions and released a 10" EP.  Are you fans of these relatively unusual formats?

Yes! The more unusual the more interesting the better. We also released a flexi too. Things like that stand out in people's record collections. 10"s are a good size. I dont know why I like them so much and coloured cassettes are the same.

When we released the cover versions we purposely left out an option for a download so that anyone who bought it would have to use the tape to listen to it. A lady in America ordered two because she wore the first one out. So that's good too, they wear out so we can keep selling them


How did the video for You Don't Know come about?

We have made a few videos with a company called Plastic Zoo so far including 'Treet U Beta', 'Anyone but You' and 'Baby it's Alright'. We're close friends with Sam Alder and for quite a while and have been throwing ideas for videos around.

The idea for this one spawned from finding child versions of us to mime playing my guitar and Ben's drums for a video. Then that went to the two mini brogues playing to a crowd of kids to us playing to some pre teens in a school.

It's a weird train of thought I suppose but we figured they would either love it and dance or hate and cry. Either reaction would be funny for a video.

For a while after we tried to ask some teachers we knew and some schools and most of them weren't interested or said it would be too difficult to organise so the idea fell by the wayside for a good year. Then one day I went to see Sex Hands play a show at Islington Mill and Joe (who had recently started teaching) asked us to do him a favour and play "rock music" to children as part of a new educational incentive to show children different kinds of music, classical, pop music etc. We asked if we could film it as we had an idea for a video and never had chance to do it.

It was pretty short notice and Plastic Zoo couldn't film so we agreed to just play a daytime show, the kids and the teachers loved it and said we could make the video later in the month when we could get a film crew in.

It was definitely worth the wait. Probably our best video.

What are your plans following this single - are you recording or going out on the road?

We are mostly playing local shows with the odd one out of town whilst we write our next album we might be doing a double LP but were not sure yet. It's definitely gonna be heavy though.

The Brain Melter split EP is released on September 27th on Haus of Pins and available from participating record shops.