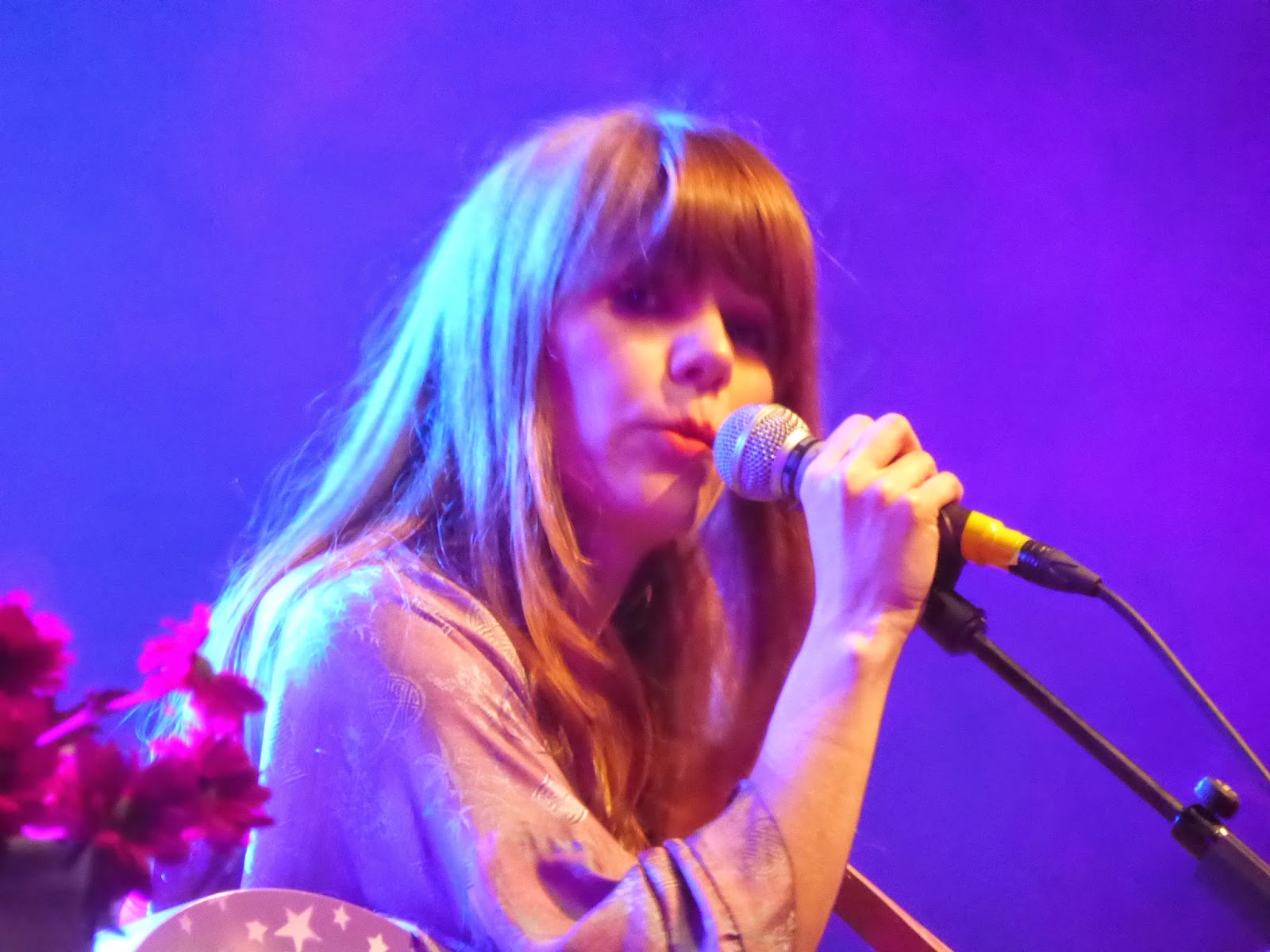 Jenny Lewis stopped off at Manchester Ritz on her whistle-stop tour of the UK to promote her third solo album The Voyager and charmed us all with a mix of tracks from it and a few favourites from her earlier solo albums and her Rilo Kiley past.

The main focus of the set is The Voyager and we get nine of the ten tracks from it.  It's here that she remains most faithful to the originals, the sugar-coated pop tones of the record being replicated faithfully by here six-piece band despite some of the darker subject matter.  The alt-pop faux-country twang of lead track Just One Of The Guys is one of the highlights, but there isn't a weak song amongst them from the dizzying swirl of Head Underwater through to the epic stylings of the title track. 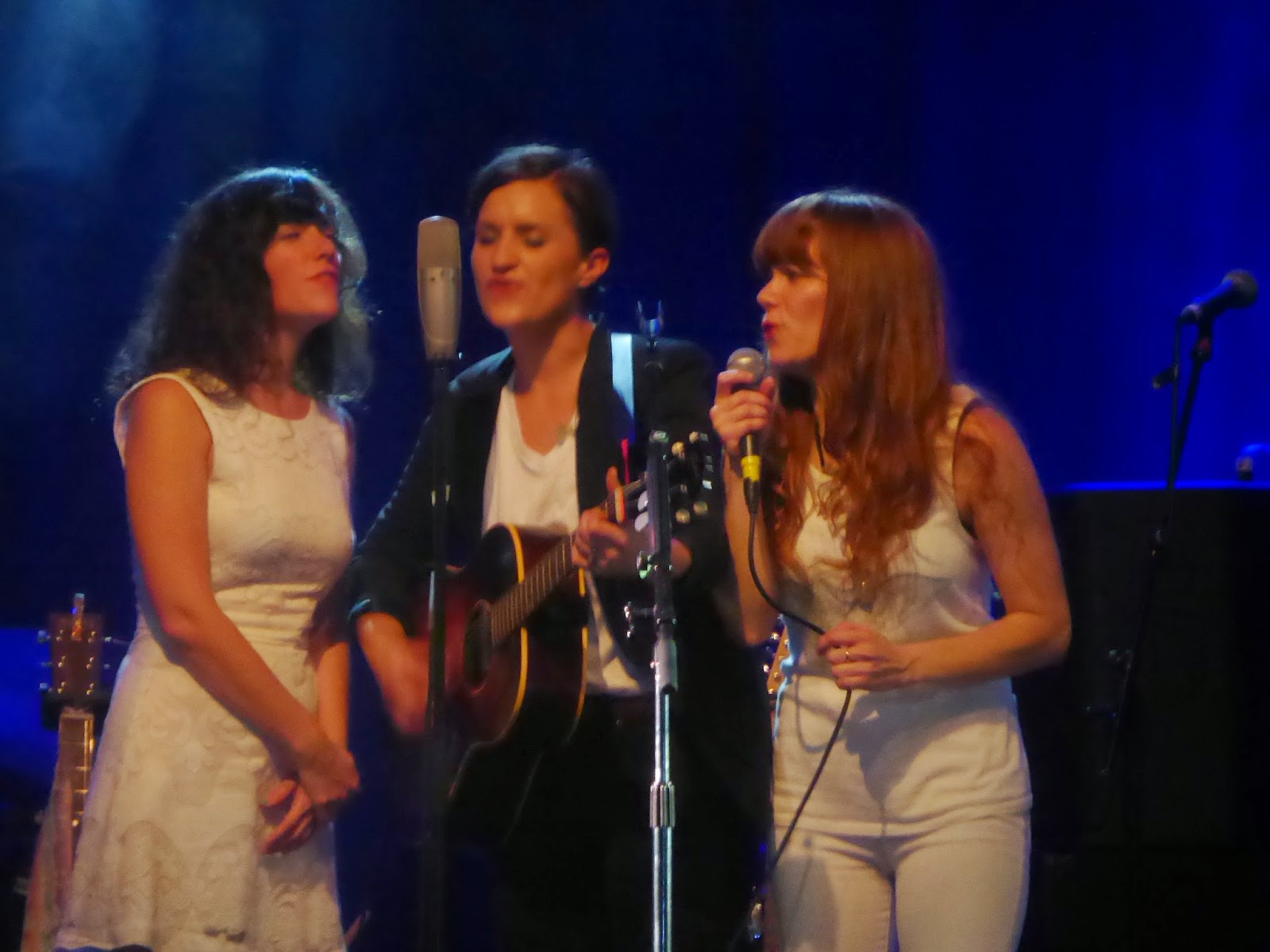 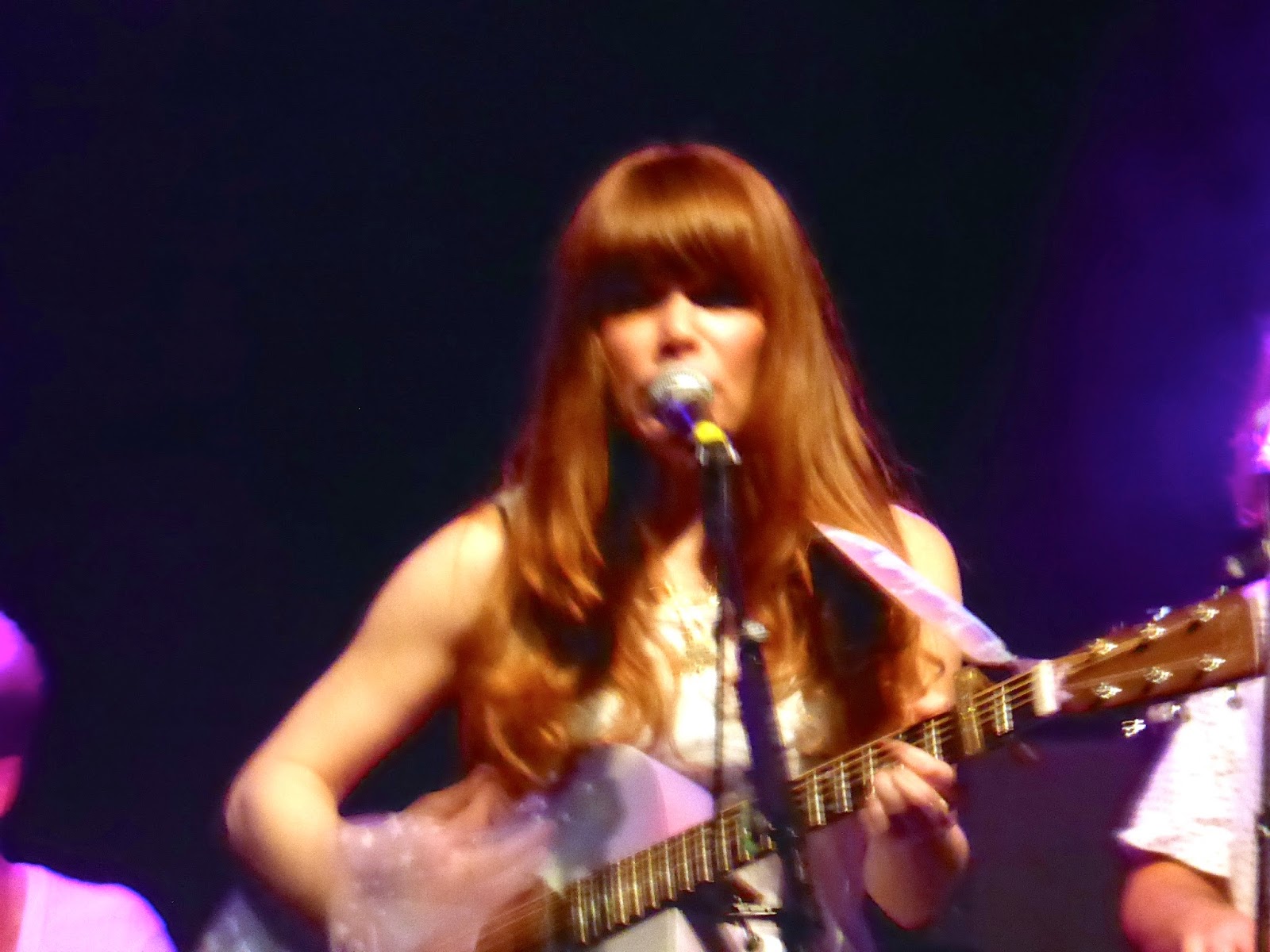 The Next Messiah, from her previous album 2008's Acid Tongue, sees her interchanging vocals with one of the women in her group to great effect.   It's an eight minute wandering masterpiece which sees Jenny at both the organ and on guitar.  For Bad Man's World, from the same album, Jenny moves on to the organ performing a gorgeous ballad and demonstrating that she's an accomplished musician as well as singer.

There's nods further back into her career with a couple of gems, Rise Up With Fists and You Are What You Love, from her debut solo album Rabbit Fur Coat, released back in 2006.  The best reception is, predictably, held back for the four Rilo Kiley songs she performs.  Moneymaker, the first single of their 2007 swan song Under The Blacklight, is the only obvious choice though whilst she opens the set with that album's first track Silver Lining.  There's a few shouts for Portions For Foxes off More Adventurous, but she doesn't go for the obvious under-rated A Better Son/Daughter as the set closer.

Her band are incredibly accomplished and provide the platform on which she can weave her spell, whether it's when they're going full on rock mode or providing more intimate, simple backing, such as the start of the encore where she joins forces with her two sisters-in-arms for an acoustic With Arms Outstretched that drips with emotion and shuts the chatty Ritz audience up.  They swap instruments around and change from a three-piece to six and then back to three without impacting their chemistry with Jenny. 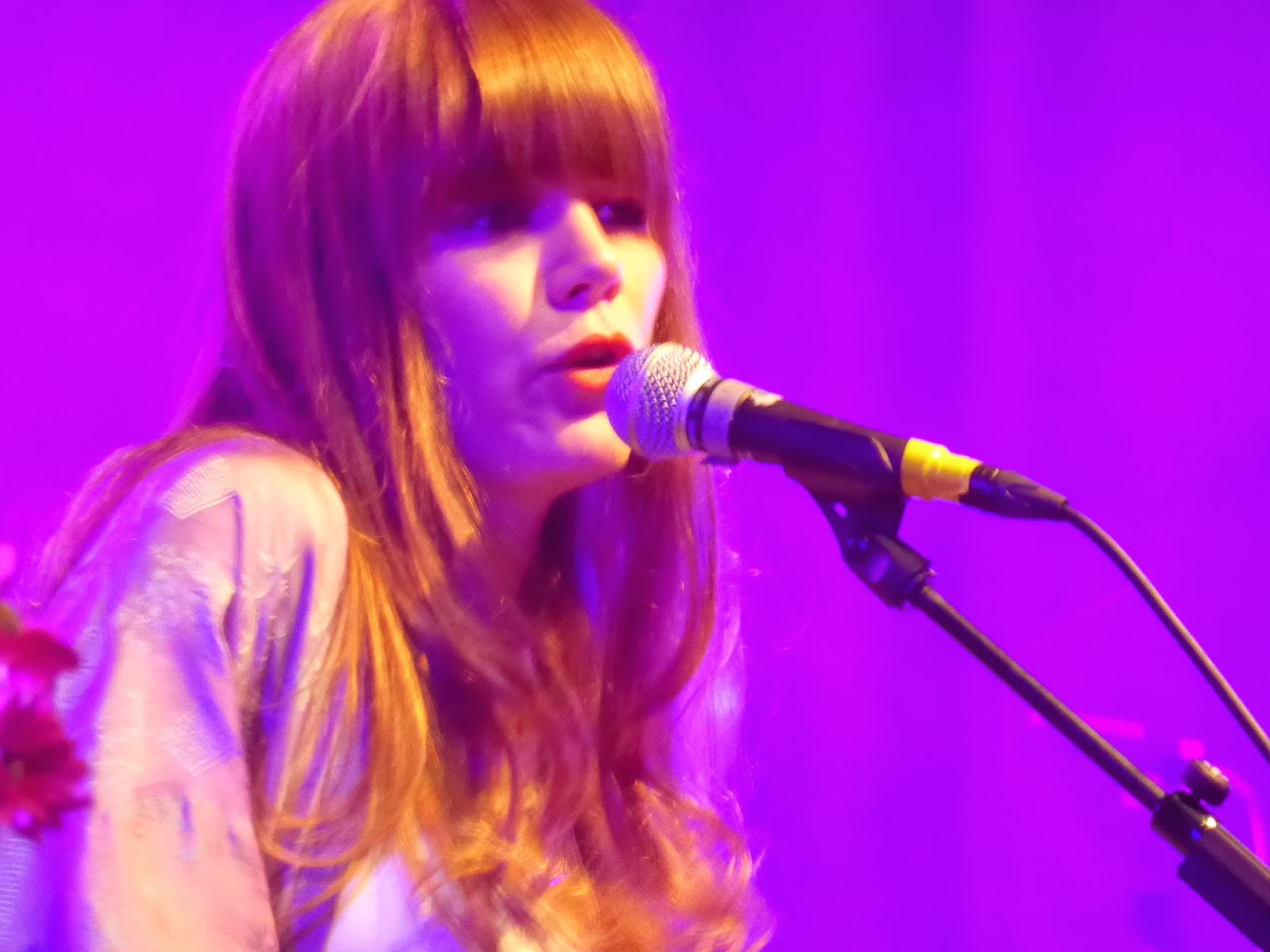 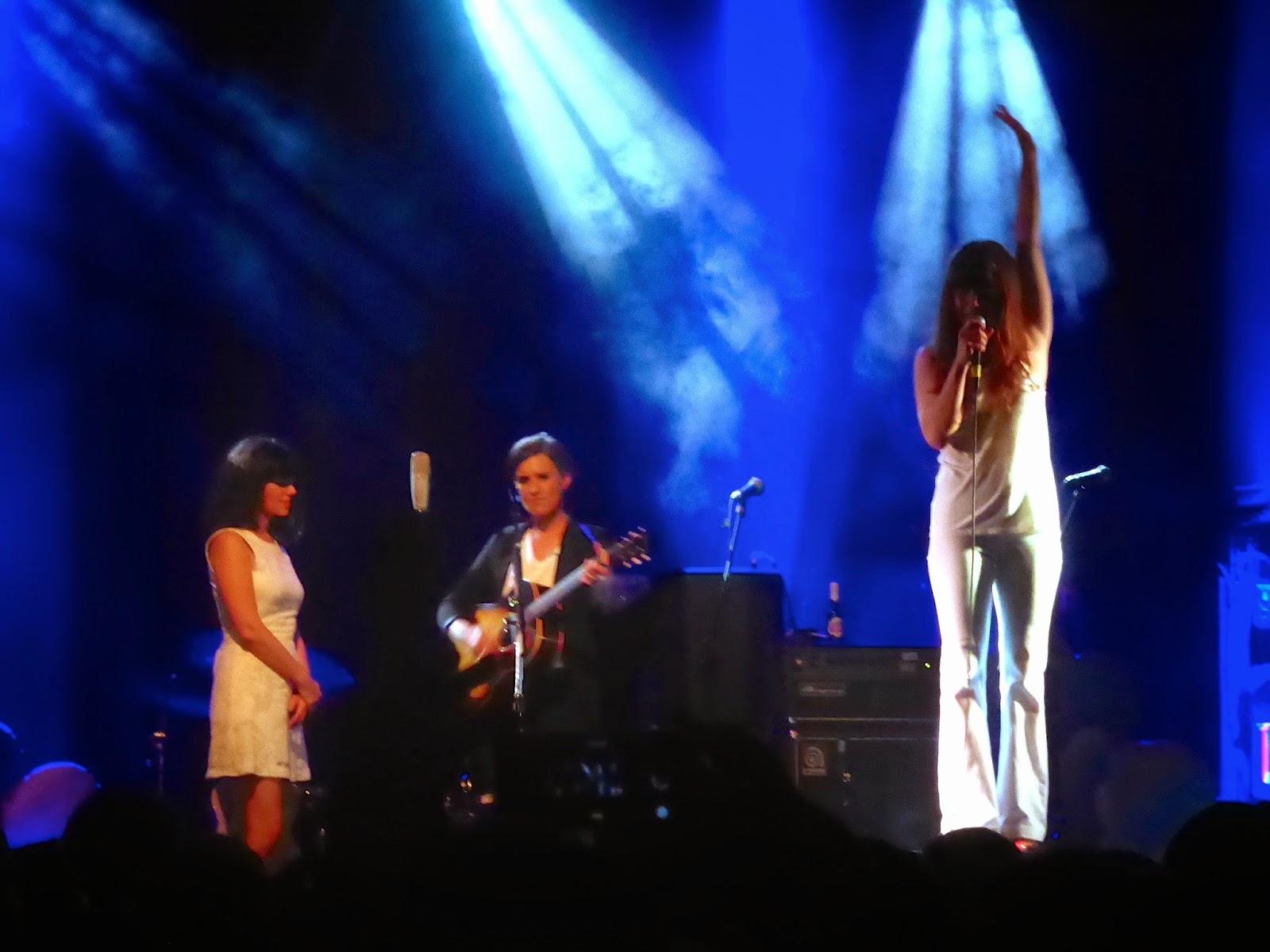 Jenny Lewis is the perfect pop star, stunningly beautiful dressed in white, brimming with confidence, doing little dances in the instrumental sections of songs, chatting excitedly between songs and even taking time to take the mickey out of drummer Josh as he dons her robe and the Manchester weather whilst explaining the background to Aloha And The Three Johns.  The girls want to be her, the boys want their girls to be like her.  And whilst she's still producing music that's as accessible as The Voyager and playing shows like this, she's not going anywhere soon.

Jenny played Silver Lining, Just One Of The Guys, Head Underwater, Rise Up With Stars, Slippery Slopes, Moneymaker, Next Messiah, Bad Man's World, The New You, Late Bloomer, You Are What You Love, Aloha And The Three Johns, Love U Forever and A Better Son/Daughter with an encore of With Arms Outstretched, The Voyager and She's Not Me.