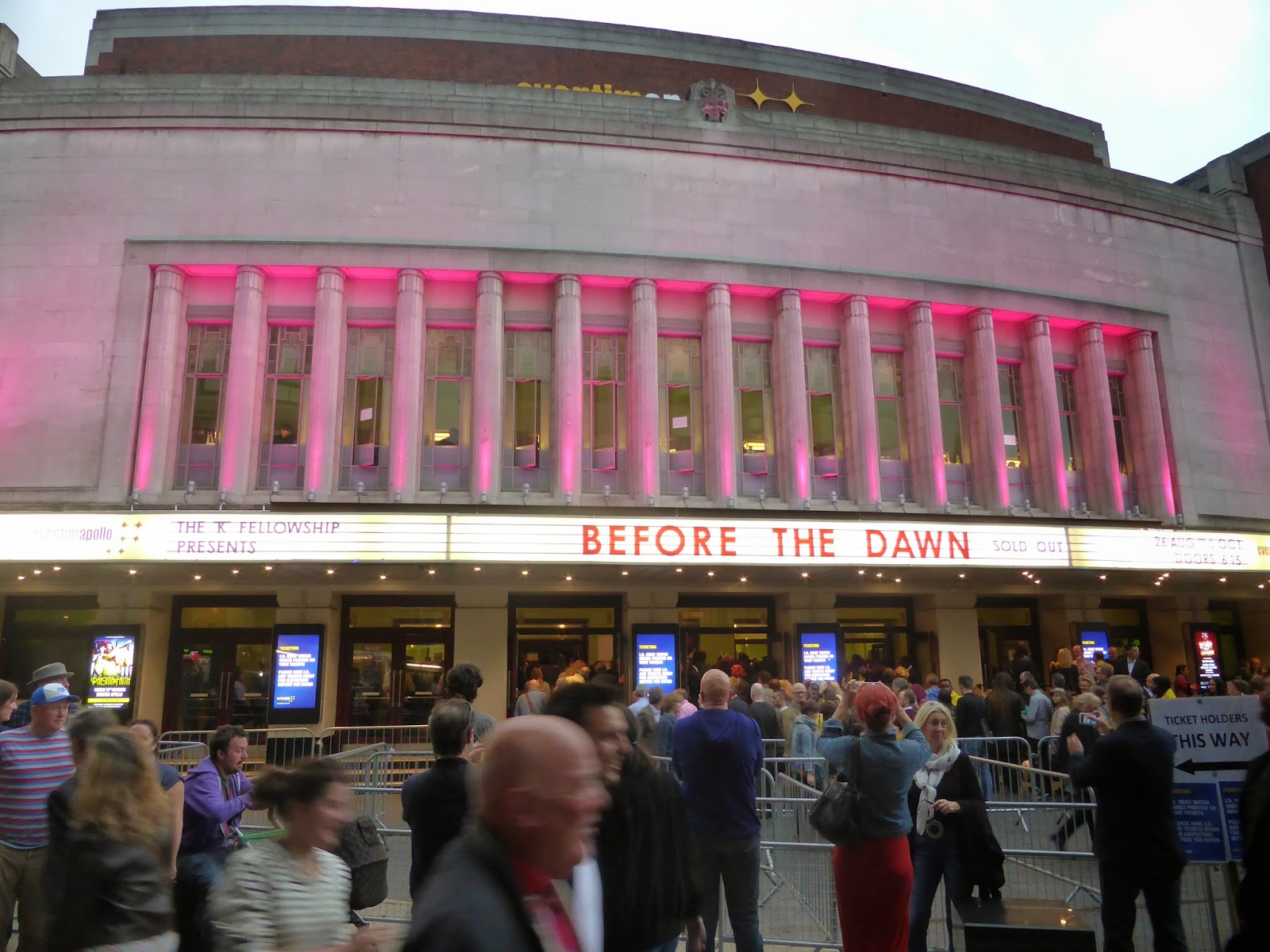 Kate Bush commenced her run of 22 shows in London last week.  Debby Walker went along to see her musical heroine, 35 years on from seeing her perform in Manchester aged just nine. As back then she left utterly bewitched.

I’m incredibly fortunate to have seen two Kate Bush performances; the first was on 11th April 1979 at the Apollo Theatre, Manchester (as it was then known) and the second, some 35 years later, on 29th August 2014 at London's Eventim Apollo.

The imagery and impact of that first show, despite being only nine years old at the time, was so strong that I can easily conjure it up in my mind’s eye. I am in no doubt that the same will be true of Before The Dawn – an enthralling, sometimes bewildering and totally engaging production. A creative and technical team led by Kate intricately interwove many disciplines – voice, music, movement, film, acting, lighting, costume, sets, puppetry – the list goes on. 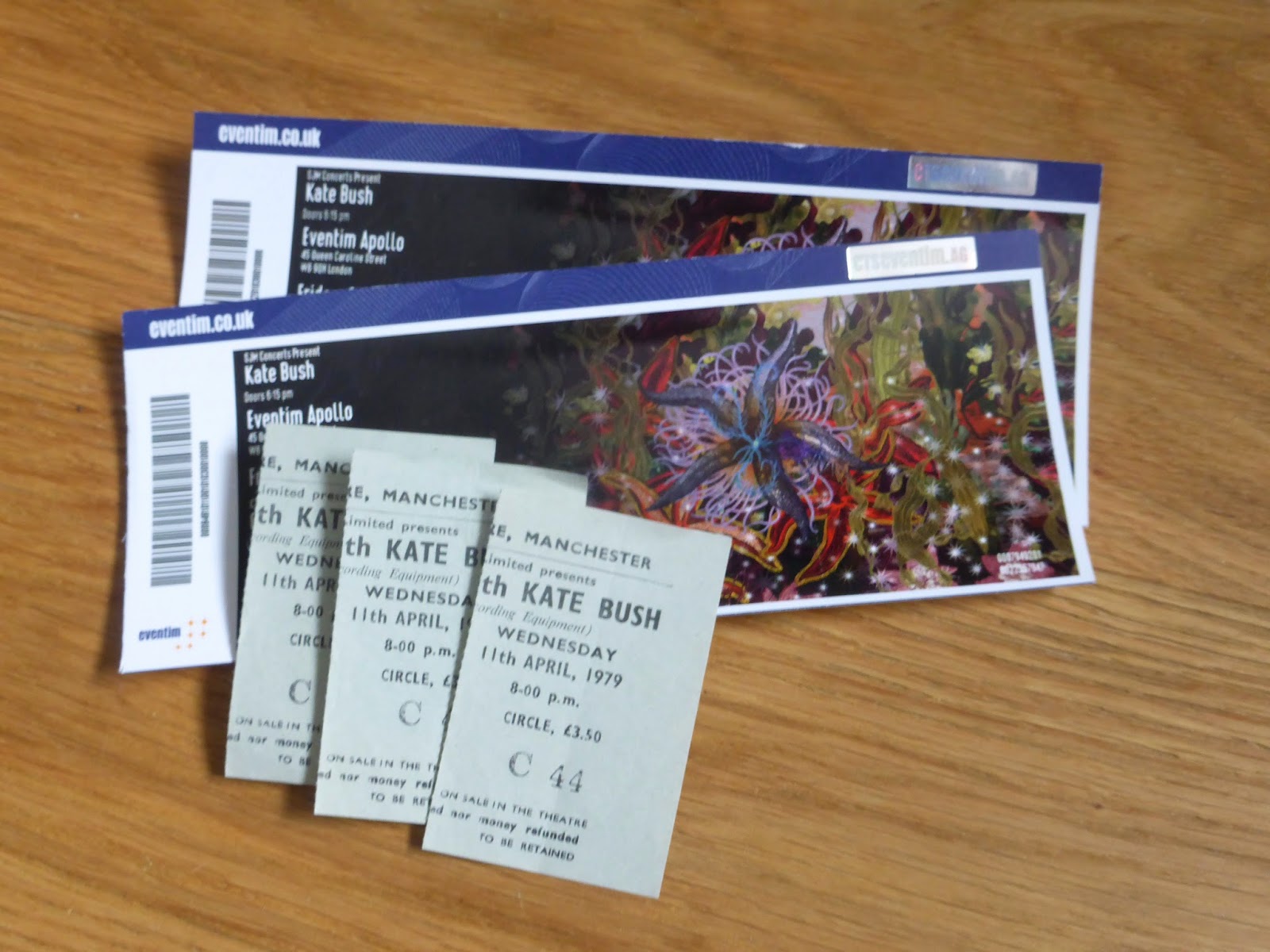 There was an eerie calm amongst the 3,600 strong crowd as we took our seats; the calm before the storm. The evening was split into three distinct parts followed by a short but incredibly welcome encore.

Part 1 was the simplest in respect of staging, with the band stretched across the stage on a bank of risers leaving a large empty space at the front for Kate to move and sing in, and comprised 6 songs. The warmth of the reception when she appeared, barefoot and dressed in black, was palpable and between songs, the roar of approval, with the majority of the crowd jumping to their feet, did not diminish.

This section featured Lily and Top Of The City which come from the 1993 album The Red Shoes, Running Up That Hill and the title track of the 1985 album Hounds Of Love, and Joanni from the Sea Of Honey section of Aerial, released in 2005.

The band, who comprised guitarists David Rhodes and Frissi Karlson, keyboard players Jon Carin and Kevin McAlea (who played in the 1979 band), John Gilbin on bass, with Milo Cinelu and Omar Hakim on percussion and drums respectively, created an incredibly luscious and complex backdrop to Kate’s voice. Moving from an intense wall of sound to the most delicate and intricate accompaniment.

The presentation of this section with no distractions was exactly what the audience needed; giving us time to marvel and astonish in the seemingly impossible sound and vision that appeared before us – Kate Bush!

Kate’s voice, in this opening section was full and rich. Her range, although changed was still impressive. Top Of The City was an excellent showcase taking her from passionate and almost gravelly to the most delicate of tones. 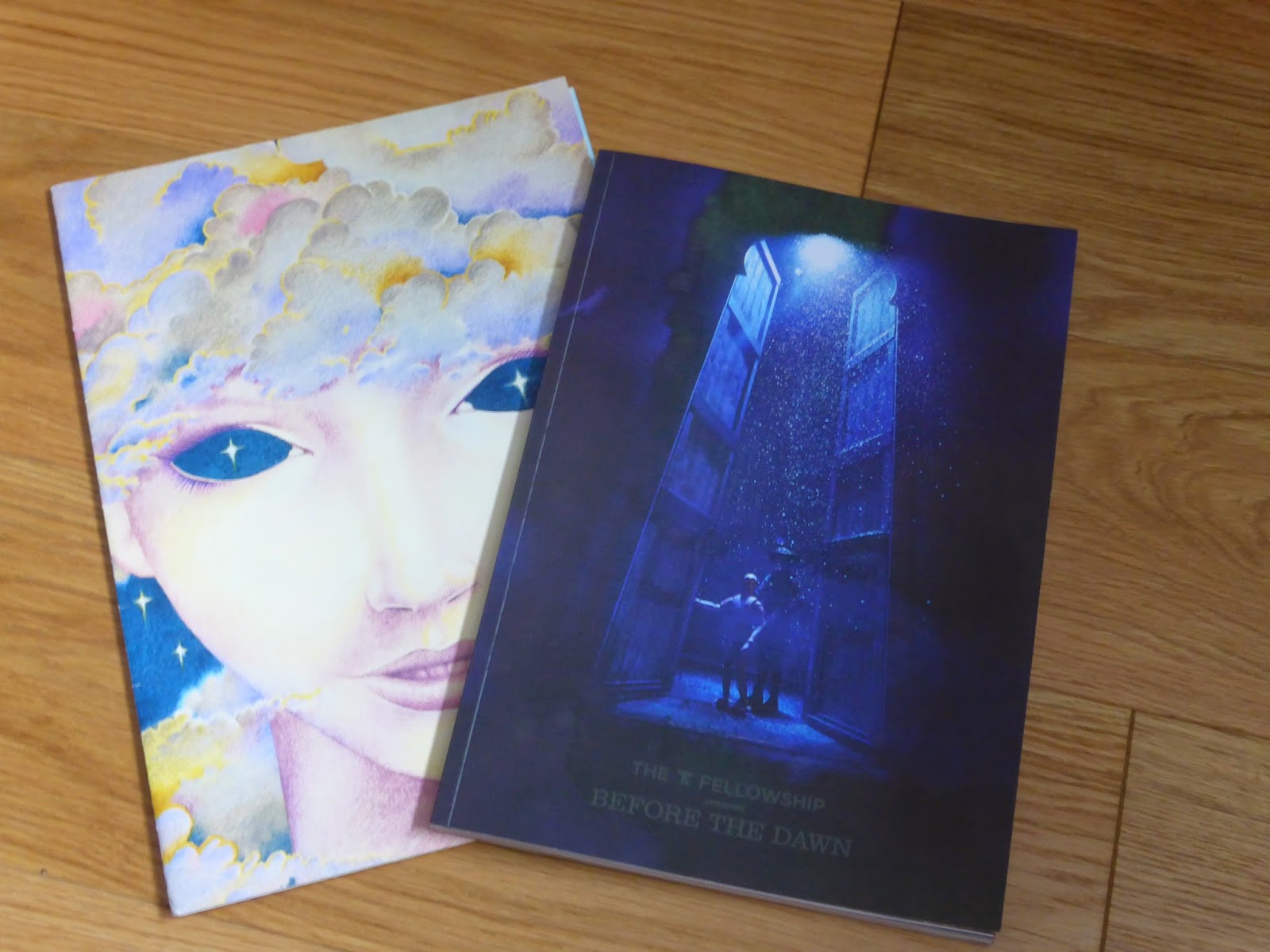 Part 2 opens with a filmed section written by Kate and David Mitchell (not that one, the other one) featuring Kevin Doyle as an Astronomer making a report to the coast guard, this is a prelude to the presentation of the seven songs which make up The Ninth Wave which was the B side to her 5th album Hounds Of Love.

The opening song And Dream Of Sheep is again presented on a screen, which sees Kate floating in water and wearing the life jacket that we have already seen in the publicity poster.  From here we move back to the stage for Under Ice in which the chorus / actors break through the stage to reveal Kate beneath the ice. Her Movement Director, Sian Williams and Paul Kieve the Illusionist, both of whom have worked extensively with dance and theatre companies, come into their own allowing her to appear and disappear throughout the performance.

Certain aspects of the spoken sections of the Ninth Wave are lifted directly from the original recording whilst others, for example, the Witchfinder making his accusations in Waking The Witch are performed live and to dramatic effect. In the original recording there is a faint sound of a helicopter – this is extended both aurally and visually with a huge industrial piece of machinery moving back and forth across the theatre, shining blinding search lights into the audience as if to find the missing crew members the astronomer had reported earlier. The noise of the helicopter is almost deafening and is one example of many where the sound team have used surround sound to immerse the audience in the action. 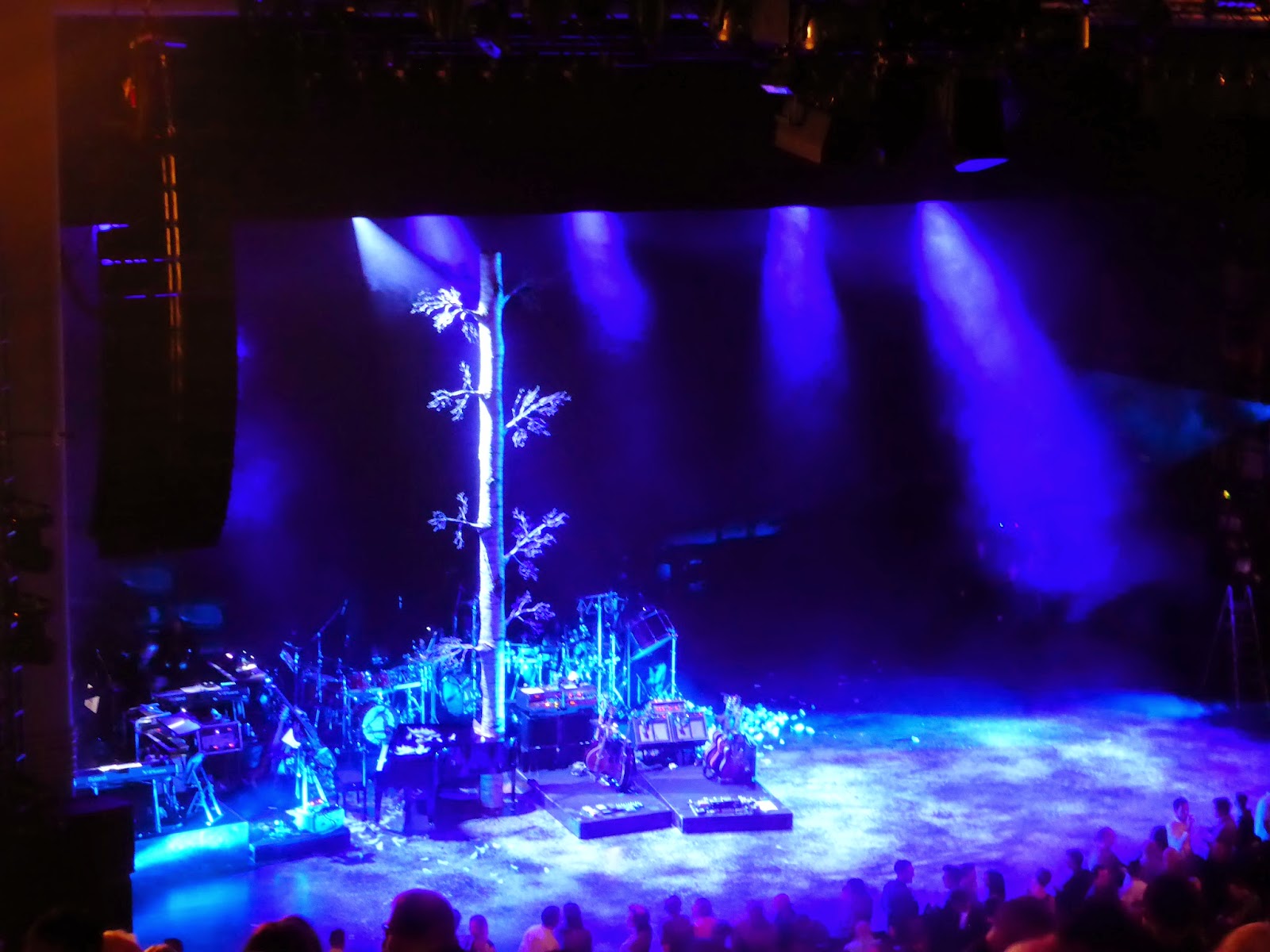 A specially written scene follows, set in a quirkily designed sitting room and is based around a slightly comical domestic conversation between father and son. It becomes apparent that the only crew member still missing is their wife/mother – Kate, who appears in the scene, but is unseen by them, to sing the fourth song from the suite, Watching You Without Me.

Jig Of Life is up tempo and energetic with a Celtic feel with Kate pleading "let me live" and sees the crowd naturally joining in with hand clapping and concludes with John Carder Bush who appears on an icy screen which rises from beneath the ice.

Hello Earth the penultimate song of the suite is set on a huge buoy scattered with sailors shining torches into the black sea but unable to see the missing Kate, who is eventually subsumed by the water and fish people who carry her in a funereal type procession down a ramp into the audience.

Morning Fog the finale of the piece is performed at a slightly slower tempo than on the original recording with the whole ensemble scattered across the stage. A relaxed walking / folk dance motif is taken up by everyone. Kate extends a poignant lyric from the end of the song adding in her son Bertie and ‘sisters’ so that the line now acknowledges her real and creative family who she gestures towards: "I kiss the ground, I tell my Mother, I tell my Father, I tell my loved one, I tell my son, I tell my sisters, I tell my brothers, how much I love them".

After an interval Part 3 takes us on another adventure; this time based on the second disc, a concept piece, from the 2005 album Aerial – A Sky Of Honey. Where The Ninth Wave had taken us through the sea and waves to meet the fish people, A Sky Of Honey takes us soaring into the skies. Once again filmed sequences projected onto huge screens are used to great effect, a huge white dove for example appears to land on and envelope the band in its wings. 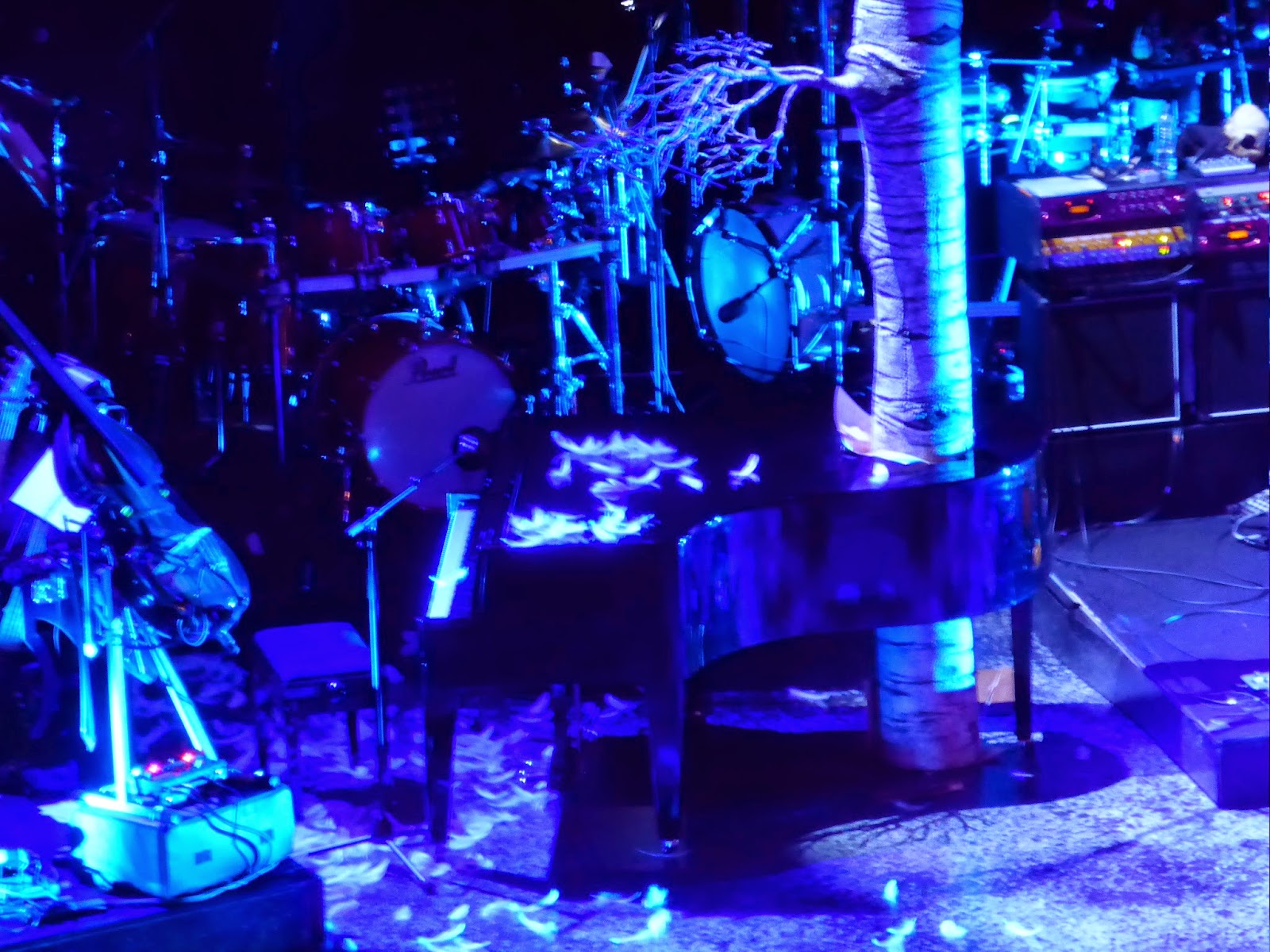 A puppet (ingeniously attached to the front of the puppeteer) that takes the form of a wooden artist’s model, with childlike stature and movement quality inquisitively explores the stage and creates a thread tying this section together. The other key character, alongside the puppet, is the painter, played by Bertie McIntosh (Kate’s son) who works on a huge canvas, which in reality is an ever-changing projection on a framed screen.

As with The Ninth Wave some elements are taken directly from the original recording such as Bertie’s voice, "Mummy, Daddy, the day is full of birds, sounds like they’re saying words" in Prelude. The serene and extended Prologue with its celebratory lyrics totally suits the feeling of the audience: it’s gonna be so good.

Sunset is a song in two parts, beginning with a beautiful slow section with evocative and rich lyrics which is counterbalanced by an amazing rush of guitars and wonderful Spanish flavours at its end.
Tawny Moon, a solo for Bertie, was a specially written addition to the suite, with both spoken and sung lyrics. I wondered if his line "I’ve got blisters on my hands" was perhaps a nod to the concluding line from The Beatles’ Helter Skelter – "I’ve got blisters on my fingers".

Aerial, the finale of the suite builds and builds in intensity both through the music – which has an extended outro and through Kate’s astonishingly strong voice.

After rapturous applause Kate returned to the stage alone to sing Among Angels, the final track on her most recently released 2011 album, 50 Words For Snow. It was just what was required at that moment; just the piano and her voice, in sharp contrast to the multi-layered aural and visual experience that had preceded it.

Brushing debris from her grand piano and commenting that she really should get a better cleaner she invited the band and chorus back to the stage to perform Cloudbusting (from Hounds Of Love). There was an amazing feeling of celebration and elation, none more so than when Kate invited the audience to join in.

Following her departure from the stage I sat for quite some time in stunned silence trying to make sense of what I’d seen and heard; I suspect I’ll be doing that for some time to come as I still do about that first experience of Kate thirty-five years ago.

She has a huge body of work with a great many hit singles to her name. Noseying in on some post-show audience chats I did hear a few people suggesting she should have included more of these, but reading her extensive notes in the programme (which in itself is a thing of great beauty) her motivation was not in any way to present an evening of greatest hits and anyone who has followed her musical and visual output over the years would understand and appreciate that.

I have to thank my fellow audience members who were impeccably behaved with no chatting, no singing along (except when requested) and as far as I could tell all heeding the request not to photograph or film the show, all of which allowed us to become fully immersed in the experience.

I’m not embarrassed to say that at times I found the experience utterly overwhelming and wept through several songs – tears of utter joy. For me she is the ultimate artist.

Kate played: Lily, Hounds Of Love, Joanni , Top Of The City, Running Up That Hill (A Deal with God), King Of The Mountain, And Dream Of Sheep, Under Ice, Waking The Witch, Watching You Without Me, Jig Of Life, Hello Earth, The Morning Fog, Prelude, Prologue, An Architect's Dream, The Painter's Link, Sunset, Aerial Tal, Somewhere In Between, Tawny Moon, Nocturn, Aerial and an encore of Among Angels and Cloudbusting