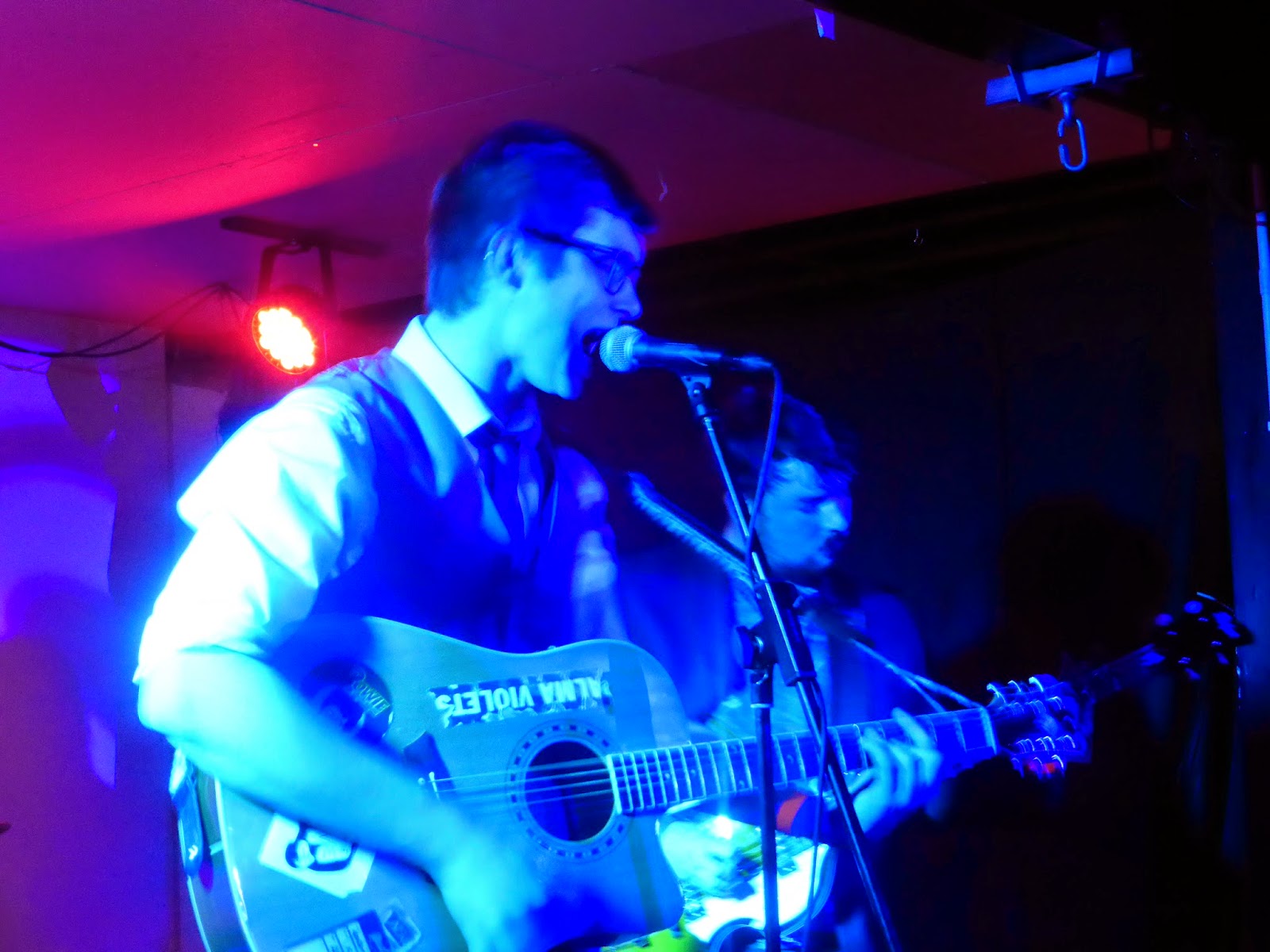 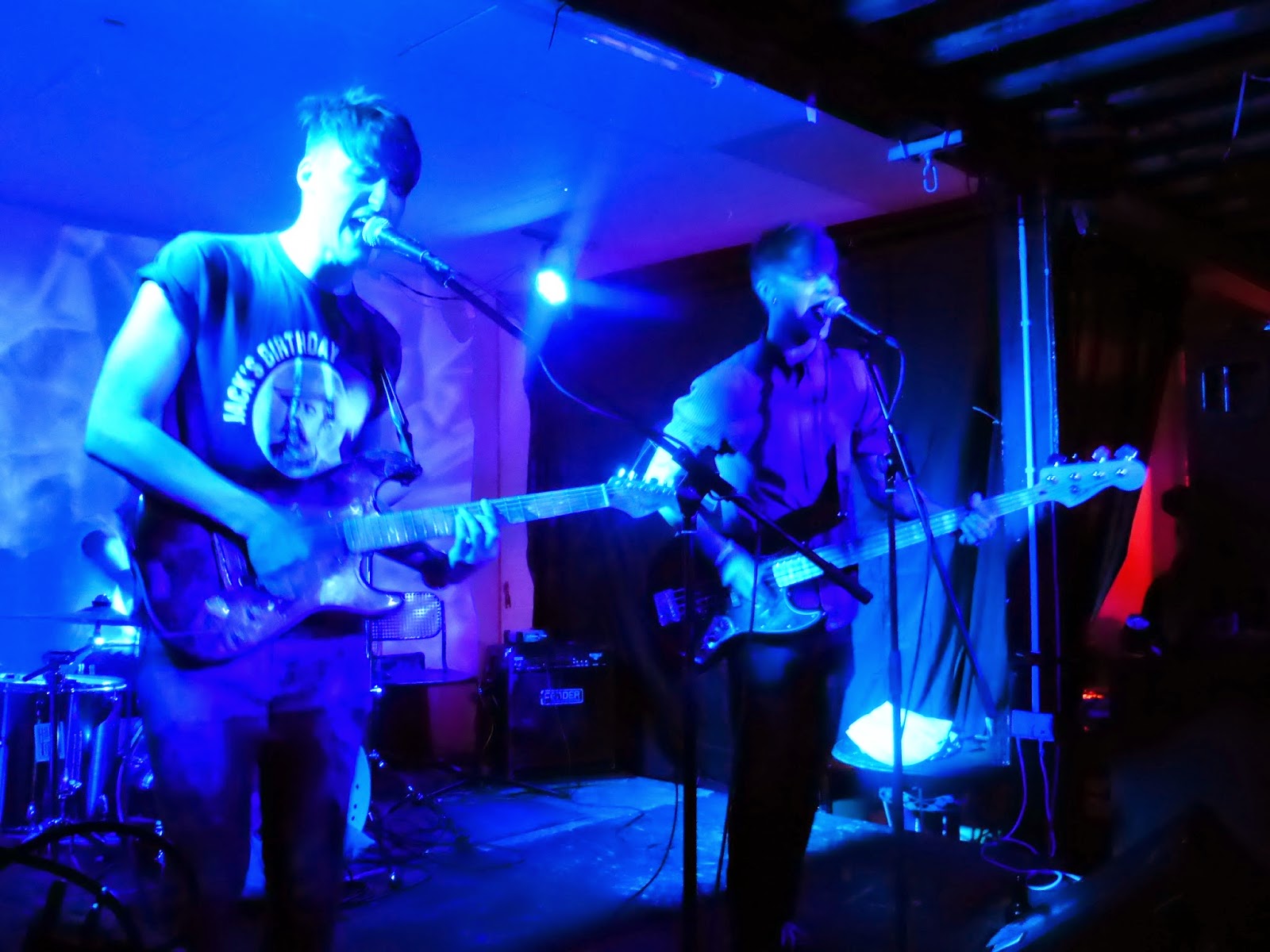 The latest of Mr Peeps' headline shows in Manchester pulls together the highly-tipped No Hot Ashes, Velocets and Jordan Allen.   We went along to check whether the hype machine is in working order.

Opening up the night is the debut performance of The Jordan Allen Band.  It's not actually the full band tonight as one of them can't make it, but we're intrigued to hear how Jordan's songs sound live fleshed out with a band, and we weren't disappointed.

Accompanied by guitar and a drum box, Jordan's songs sound much fuller and richer and it's the next step on his inevitable rise to bigger things.  He's had the Jake Bugg comparisons, but to be honest they're bollocks, there's something much smarter about his words, his performance and his demeanour that mark him out and tonight is the start of a sustained campaign to get him the recognition he deserves. 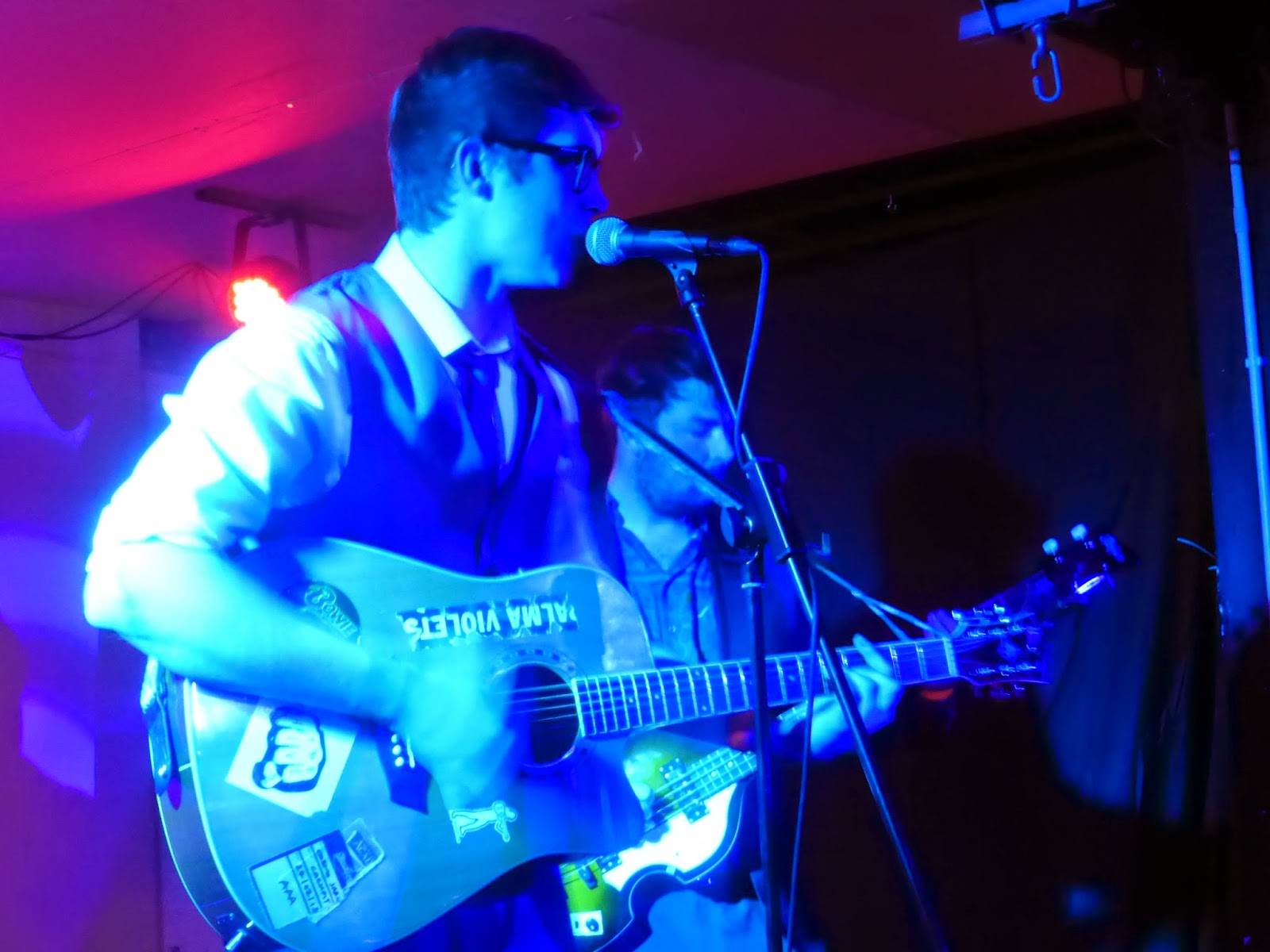 Songs like debut single Rich And Famous, Remembered and Set In Stone flourish with the additional musicians on stage and Jordan's mid-set solo piece works perfectly, particularly the cover of Courteeners' What Took You So Long.  I'm not generally a great fan of solo artists or new bands doing covers because they generally don't add much to the original and often detract from the impact of their own songs, but Jordan absolutely nails it including the snippet of James' Tomorrow that's featured in their live versions of the song.

It's more about his own songs though and he has eleven of them in this set. His newer material points to a very promising future.  There's two tracks up for consideration as the next single that get aired tonight.  Unchartered Youth is my favourite of the two, but Pretty Blue and also older songs like Tough Luck and Devil Won't Cry are equally radio and audience-friendly.  He's very much on the rise.

Next up are three-piece Velocets who have recently undergone a line-up change and are bedding in new drummer Tom.  Having seen them just over a month ago supporting Blossoms, there's signs that the process is gathering pace, they sound tighter and more together as a unit.   Second track Sophie has a hook that those fawning over new rock saviours Royal Blood would foam at the mouth at and a chorus that's catchy enough to have people singing along and set closer Secrets has cemented its place at the end with its driving beats and its rousing invitation to the crowd to start moving. 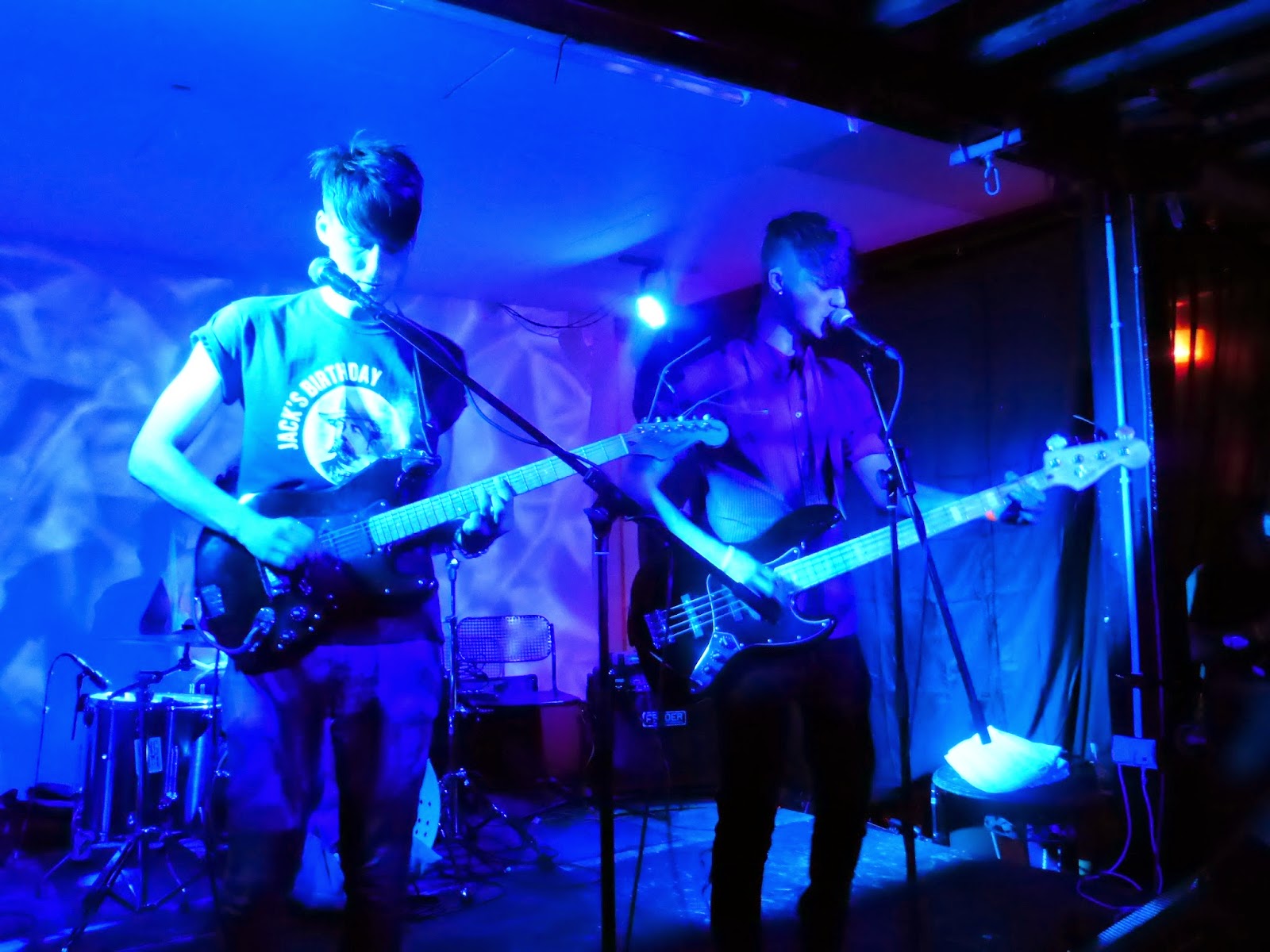 They introduce a couple of songs as new ones and they're the strongest ones in the set.  The first one, Hold On, has a strident in your face guitar coursing through it held in check by Tom's drums.  India starts with an extended riff and develops into something you'd feel as comfortable dancing to in a club as you would shaking your head to at home.  It's their best song of the night and one that could open doors for them.

No Hot Ashes have come a long way in a relatively short time and the venue is pretty much full by the time they come on, which is no mean achievement for the first headline show.  Their seven song set includes two songs Goose and Skank that they're going into the studio to record with Editors and The Twang producer Gavin Monaghan shortly which will form the start of an unstoppable momentum for them.

They remind me of the sadly departed Janice Graham Band in their approach.  They don't want to be pigeon-holed into one genre of music so they import all sorts of influences into their sound, songs change direction in the middle then change again reminiscent of a free-form jazz session and create something that's uniquely them which is rare in these days of bands seeking the lowest common denominator to get themselves heard. 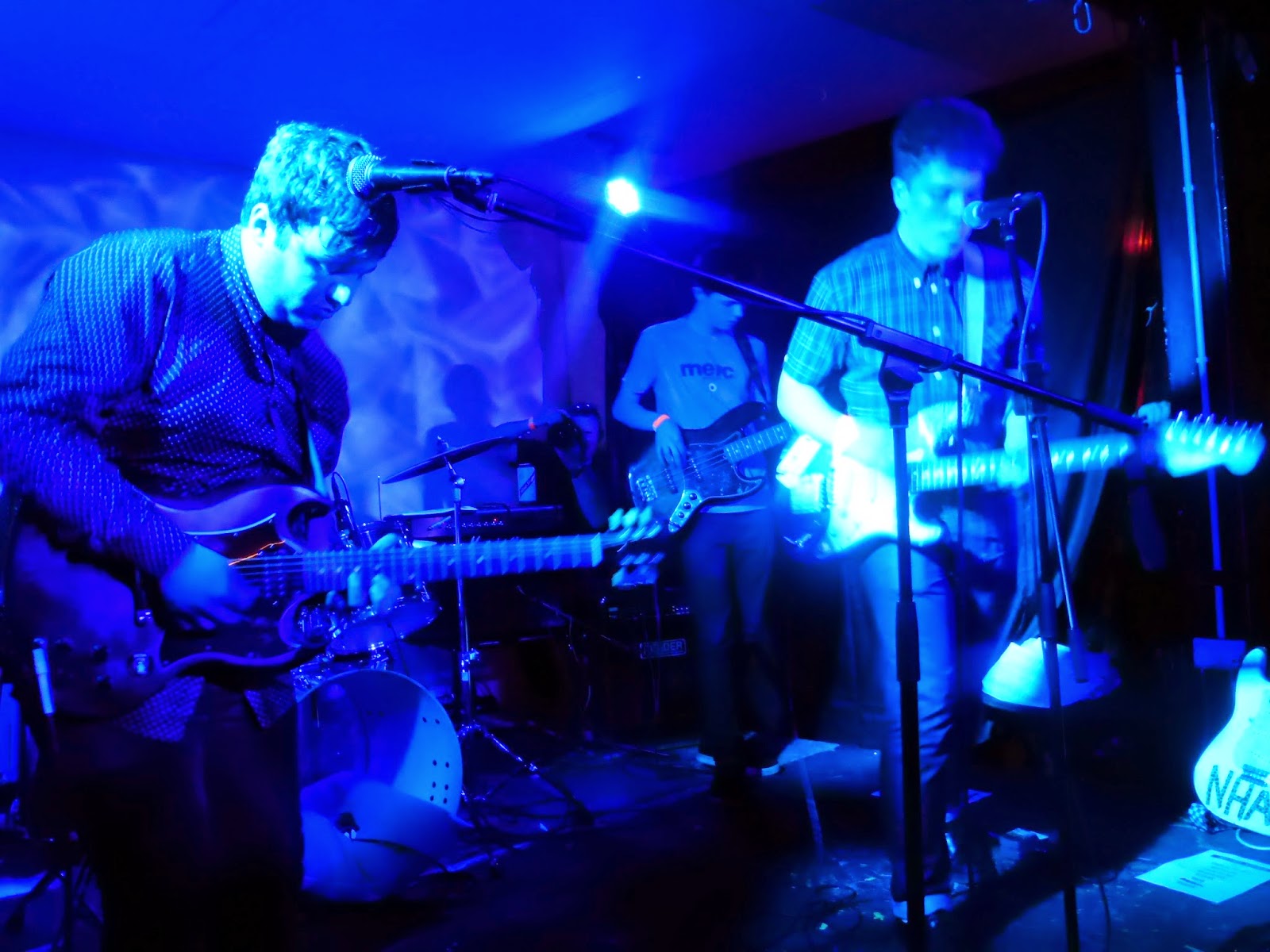 Opener Cigs And PG Tips trades in funk, ska and mean guitar licks whilst Shoot Me and Talk To Me both career ahead at breakneck speed not pausing for breath and Skeleton trades in electronic loops. The front rows of the crowd watch transfixed, not quite sure how to react, whether to watch in awe or whether to dance along.  It takes a couple of Velocets to come and get the latter going.

It's thrilling stuff, you can't take your eyes off them as they do provide a visual spectacle as well as they leap around the stage.  It all feels as if it's on the edge of screeching to a halt and breaking down, but they know what they're doing and they're a fully-formed unit that buzz off each other up there. It's reassuring to know there are bands out there not content to go with the safe and trusted and who want to give us something different.  If that's what you want, No Hot Ashes are your band. And it feels like they've just got started.