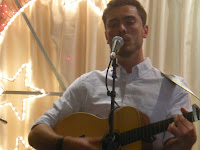 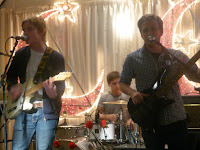 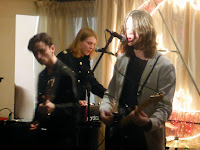 The Bungalow Club is the social club attached to Stockport County's Edgeley Park football ground. Stockport is hometown to Blossoms, the best new band in Britain at the moment, and this is the second time they've played here in a matter of months to an adoring hometown crowd. And what's more, tonight's bill also included another young Stockport talent that's going to be on the tips of everyone's tongues very soon as well.

Opening up the evening is singer-songwriter Liam McClair, a man who's a cut above the majority of that genre in the way he crafts deeply emotional yet accessible songs and delivers them with a charm and grace that immediately makes you warm to him. His set of six songs spans a range of styles from the blues of The Cowardly Man to the more introspective The Alchemy (which is based around Paulo Coelho's book The Alchemist) as well as the more audience participation oriented closing track Honey, the title track from his latest EP.

He also swallows a brave pill and takes on a cover version of Joy Division's Love Will Tear Us Apart. Often thought of as one of the untouchable Manchester classics, he puts his own spin on and escapes being lynched. His warm engaging manner between songs also endears him to us, especially when he suggests some 90s interaction of going up to talk to him if people don't use social media. It's a pity there weren't more in to witness his set as he went on at 7.30, but those that did got an insight into a talent that stands out from the overcrowded pack.

We'd only heard a couple of demo tracks from Rory Wynne, but people whose opinion we trust implicitly had spoken extremely highly of him and we weren't disappointed. Whilst so many young (and he's fifteen) acts these days fawn over the likes of Fray and Turner, he's already established a sound of his own, styled in part by his influences but very much his own, and a knowing lyrical style that's both intelligent and to which people can relate to. Allied to great tunes and a three-piece band set-up that looks the part as well as sounding it, we're blown away by just how great he is. 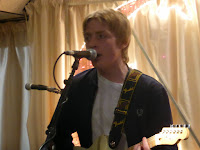 Accompanied by a bass player, who also adds backing vocals, and a drummer they rattle through seven songs in no time at all, displaying an impressive mastery of both the two and a half minute frantic headrush such as his opening two tracks Post Party Confusion and Lock Me In Your Wardrobe as well as the slowed-down more considered I Know She Knows in the course of that set. It's that diversity of sound coupled with an immediate hook and a welcoming familiarity accompanied by an individuality and a seeming knack of producing great tune after great tune that will ensure he'll very soon tread the same path as tonight's headliners.

In the small print of this site it says "we will go on and on about certain bands we love.  We'd apologise for that, but we wouldn't mean it." - one of those bands is Blossoms, a band that we're seeing fulfilling their immense potential on an exponentially expanding scale every time we see them. You can see and hear how they've grown and continue to grow, adding new songs to their repertoire and filling out some of the better known songs they've played before.

They open with a new song, provisionally titled On The Beach At Night, and on second listen after hearing it at Leeds at the weekend, it's even more impressive. Perhaps a little less immediate lyrically than their recent singles, it displays a greater depth to their sound than we've heard before with Myles' signature organ sound dueling with guitars over the breakdown.

The more familiar songs are constantly evolving and changing as they play more and become more confident in their skins live. Their sound and Tom's vocals are becoming more fluid, spaces in the songs are filled when appropriate, if appropriate, exploring all the possibilities that exist behind the basic structures of them. Madeline barrels its way to its conclusion to its ending as Josh lets loose on guitar and Tom turns his back on the crowd, kneels and encourages Joe on drums to play even louder as Smoke ascends to its triumphant conclusion. 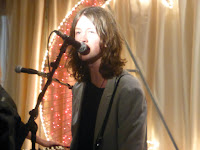 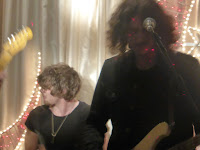 It's a set rich in diversity too unlike so many new bands at this stage in their career from potential arena-fillers as the likes of Cut Me And I'll Bleed, You Pulled A Gun On Me and Blow which have that mass appeal and immediacy needed to win over casual voters, sprawling loose but intense jams like The Urge, Lava and Smoke as well as the ability to take their foot off the accelerator for the more intimate My Favourite Room and the exquisitely hopelessly romantic Blown Rose.

These intimate gigs feel like they're going to be down in legend in years to come, a band on the cusp of something truly special. We all know the music business is a fickle mistress, and given the events of today, nothing is ever certain or happens how it should, but there's something seriously wrong if Blossoms aren't a household name by the time they've released their debut album. And tonight shows there's possibly more to come from Stockport in the form of Rory Wynne.