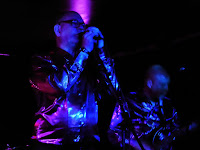 Touring their excellent new album Mind Over Matter, The Nightingales rocked up at Manchester's
intimate Kraak Gallery taking heavily from that and previous album For Fuck's Sake and demonstrated that despite the band's roots being thirty years back, they're very much of the here and now.

The Nightingales are a band full of contradictions. Frontman Robert Lloyd is nearly four decades into his career as a frontman and his latest incarnation of The Nightingales, who started off life in the post-punk era of the early eighties, sound fresher, more vibrant and more relevant than at any point in the past. Their modus operandi is to hammer through just over an hour's worth of material, mostly from those last two albums, barely pausing for breath, so it's impossible at times to tell when one song merges into the next. Whilst this should be disastrous, the opposite is true, it focuses us on the music, the cathartic energy it creates and it's why they're a thrilling live band these days.

The main reason for this are the three that Lloyd has surrounded himself with. First of all, drummer Fliss Kitson, a ball of flying hair, flailing arms and screaming vocals holds everything together, dictating the pace of the songs, jumping seamlessly from one section to the next and back again. At times it's difficult to watch anyone else but her as she loses herself completely in the songs. Her partner in the rhythm section Andreas Schmid is probably the most understated of the band, squeezing loose funk-punk rhythm almost effortlessly out his bass whilst strutting the stage oozing effortless German cool. New guitarist James Smith gets a little gentle ribbing from Lloyd and, whilst he stands stock still for most of the set, his signature is all over these sharp shock bursts of energy. 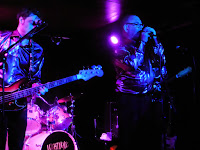 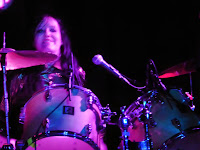 And then there's Lloyd, the idiosyncratic leader of the gang, an articulate edgy character, even in the sparkly shirt uniform he and the band are wearing tonight. This comes to the fore in the middle of Gales Doc, the faux documentary where he plays the role of an interviewer at their Wolverhampton lock-up, where he talks about the band sounding shabby but it didn't matter because in Manchester they like The Fall and The Stone Roses or the ad-libbed section in the middle of the gig where he talks of beef madras and boiled rice, but his personality defines The Nightingales as much as the wall of noise his bandmates create. At the points where he sings with Fliss, it sounds like a massive domestic argument, two voices fighting each other to be heard.

Bands that reform, lose members and add new ones tend to be awful. The Nightingales don't just buck that trend, they smash it to pieces. This is vibrant, exciting raw music, on the edge of breakdown, full of spark, verging on chaos, twenty-two songs crammed into an hour and five minutes with a refusal to live on their past and rest on their laurels and, the name apart, focused on the here and now. Go and see them.

They tour Mind Over Matter at the following dates :