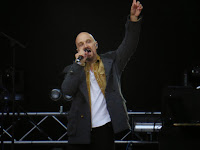 James opened their festival season with a headline slot at Scarborough's Open Air Theatre. Fresh from several weeks recording in a London studio, they debuted a new song and mixed together tracks from last year's La Petite Mort album with a series of their best-known fan favourites.

Scarborough Open Air Theatre is an interesting gig location for a band that creates the energy that James does. Set in a picturesque park on the outskirts of town, the crowd are perched on a steep set of banking seats separated from the band by a lake that there's no way of crossing because there's a protection order on some crested newts that mate in its waters. For a band that often makes a connection by Tim Booth venturing into the crowd, it's a challenge as he is stage-bound throughout by sheer geography, but a band like James are past masters at dealing with such scenarios and communicating with their audience in a way so few bands can do. 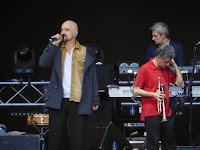 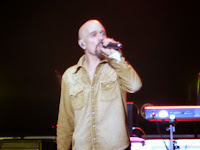 Opening with Walk Like You, the first track on last year's renaissance (and every album they do now feels just like one of those), they send a statement out that this isn't just simply going to be an exercise in running through their hits for an audience fuelled by the early appearance of the sun and a bit of seafront beer. Looking around though you sense, by the number of people singing along, that the crowd get this. As the first festival season gig people have travelled from far and wide for this show as evidenced by the local DJ doing shout-outs to people between opener James Walsh and James themselves.

Ring The Bells is next up and, despite being one of the few pretty much constants in the set, it's a song that never feels like it's outstayed its welcome and needs a rest. Right from the opening drum salvo, it's a little cyclone of energy that gets people up and dancing. Whilst not possessing the killer chorus that so many of their hits do, it embodies so much about the band as each of them play a significant part in building it to its chaotic conclusion when all hell breaks loose in a wall of improvised noise. Waltzing Along is a little more traditional in its verse-chorus-verse-chorus structure, but feels reinvigorated these days, having benefitted from a rest a couple of years back, not played at every show and having been reassessed and reworked slightly without losing the basics of the song that make it so popular with the fans. 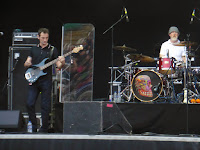 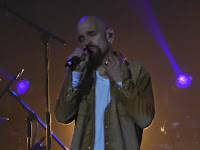 Curse Curse and Interrogation follow and it's refreshing to see how many songs from La Petite Mort have retained their place in this set, firstly because the songs stand up around the monolithic hits from the nineties that surround them but also that they serve as a reminder that, unlike so many bands that have made a return, they're creating new music that stands on its own two feet. Mark Hunter's signature keyboards are all over the former, teetering it on the line between eighties disco stomp and alternative anthem. Scarborough raises its collective arms and sings along to Tim Booth's wistful recollection of a couple in the next hotel room going at it hammer and tongs. Interrogation, in contrast, is a dark brooding tale of self-assessment where the band take over mid way through and let loose to build the song from the claustrophobic into a stunning explosion of sound whilst Tim dances away, seemingly lost in a trance.

The next two songs are bookends of the band. First up is Hymn From A Village, released in 1985 but dating back a few years earlier. Gone are the jingly and jangly indie guitar strains that characterised their early work and made so many of us fall in love with them even back then and in its place is a confident strident aural assault that manages, somehow, to keep faith with the original whilst bringing it smack bang up to date.

It's followed by the world premiere of a new song that Tim tells us is called All About Nothing and that "in true James fashion, we don't know it yet and this is probably the only one we could play". They're in the studio at the moment recording a new album and if this is the first fruits we're in for another album that reflects on the meaning of life with the opening words along the lines of "nothing but love gives the world some meaning, nothing but love is the drug of healing." There's references to avalanches, earthquakes and volcanos and a gorgeous keyboard-driven breakdown. Like so many James songs revealed early in their evolution, it's likely to change significantly before it's released, but it doesn't seem that their creative spark is dimming any time soon. 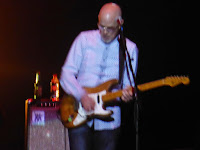 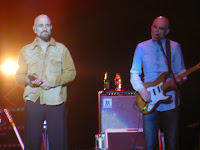 Just Like Fred Astaire is next and as the light fades it starts to feel a lot more like a gig. The song swirls around the arena and lifts us all up. Rather than run a list of hits until the end of the set they perform PS, with the stage bathed in a beautiful red light accentuating the depth of feeling that pours out of each and every line of the song. Similarly Don't Wait That Long, a song that they've never quite managed to capture live in my opinion since they came back, is finally conquered tonight, beautifully brooding, slightly menacing and perfect for that mid-set contemplation before the inevitable onslaught of anthems that is waiting in the wings.

Despite the distance between band and audience there's no problem in creating a connection across the water. Sound is a case in point, it ripples across the water, up the steep banking and back down again carrying the love and energy of the crowd back up to the stage. As they take the song down and start to improvise it's no less powerful and the reaction at the end as the crowd pick up the "mah bah ooh" refrain and sing it back, tells its own story. The amount of people singing every word of Moving On and the response it gets is testament to how James are still making connections to people with their newer material - whilst Booth was always seen as something of an outsider by the press at their peak, there's thousands of people here to whom he is one of us, singing about things that matter to us, singing about what we feel every day and that's never gone away and why James have endured and maintained that connection with their fans that so few bands, even those that have gone on to bigger things and grander stages, fail to achieve. 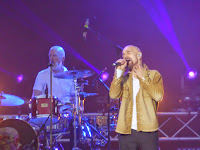 Laid is as completely bonkers as ever and by this point everyone's on their feet, the pathway in front of the seats is full of people dancing, recreating, recapturing their youth, but also with people who weren't around first time round and Getting Away With It (All Messed Up) concludes the set with everyone picking it up and singing it before Tim can come in. For a song that felt like it crept out at the tail end of the pre-split incarnation of James, it's developed into a monstrous calling card, a song that transcended chart positions to be one to fill arenas and theatres and join band and audience together.

They leave the stage and they're gone a while creating fears that the supposed 10pm curfew might strike them down and not allow them back, but it turns out they were trying to find a way to come into the crowd and perform some songs acoustically. Alas, that wasn't to be and they return to the stage and start up with Sit Down, which Tim explains was rested last year. Tonight it's all about celebration and communion and whilst all James songs have that spirit coursing through them, this one does hold a special resonance for so many as it was their introduction to the band. Come Home sends the crowd into even more of a frenzy, fighting for space to dance and that continues through the closing Sometimes which leaves the crowd singing the chorus for a good ten minutes afterwards as everyone makes their way out into the Scarborough night.

All in all, this was a successful opening night of the summer for James. The fears that the venue set-up could dampen the celebratory spirit and connection that characterises James gigs were fortunately unfounded. The band sounded extremely tight given it was their first gig for six months but weren't afraid to let go and improvise in parts either.  The set mixed old and new, familiar and less familiar and continued their tradition of revealing songs that are work in progress.

James played Walk Like You, Ring The Bells, Waltzing Along, Curse Curse, Interrogation, Hymn From A Village, All About Nothing, Just Like Fred Astaire, PS, Don't Wait That Long, Sound, Moving On, Laid and Getting Away With It (All Messed Up) followed by an encore of Sit Down, Come Home and Sometimes.