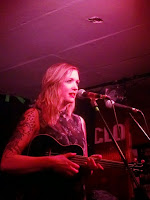 She Makes War is a regular visitor to Germany where she has gained a big fanbase. Our friend Gudrun from Karlsruhe caught her show at the Kohi and reports back for us.

I always find it interesting to see our German life reflected in the eyes and hearts of attentive foreign visitors. Especially, when it comes to musical guests from the UK - the root of indie music, where German and Nazi are often still equated. Laura Kidd from Bristol with her music as She Makes War had stopped in Karlsruhe for the third time - and that's no coincidence.


The German audience won her heart and her friendly and open nature won her friends and fans who support her and beg for more visits. The general mood this Saturday evening was also the way you would wish for for every concert evening: A happily excited artist, vocally perfectly fit and an audience warmed up by the spring sun and the festivities at Südstadt that weekend. Also at the show I observed the right dose of music friends who didn't know her and her music and recurring allies in Gloompop.

When traveling alone in Germany Laura likes to travel by train and already had felt the impact of the strike in October 2014. This time, the impact was even more noticeable and Mein Fernbus and car-sharing were forcibly and unplanned set to the top of her German cultural and educational program. So it was not so surprising that this played a role in her tittle-tattle. Surprising was rather the fact that she has acquired a lot of German in the meantime and was able to use it.

As native speaker sometimes you might even learn something interesting. A very enlightening moment was, e.g., as she talked about herself and Germany, revealing as last witty fact that she liked "deutsche Küchen". This caused a bit of stunned silence and you could feel how everybody wondered if she really meant it, or what could well be the mistake. Even Laura immediately sensed this sentiment and wanted to find out what she had accidentally told us. "You like German kitchens" - "Oh no! I hate kitchens" But she likes "deutsche Kuchen“, i.e. German cake. Oh, these ü-dots, these troublemakers when using a foreign language. 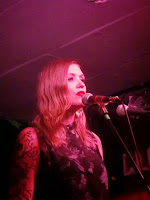 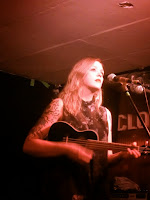 The set started with the classics Shields and Daggers, Olympian and Let This Be. During the concert, however, we were given a total of seven of the eleven newly recorded pieces to hear, among others Slow Down Sunshine about the ex-boyfriend described as a bloodsucker (here another German lesson was asked for). That moment Marco from Kohi, who was with crutches that night had just secured a place in front of the stage. After Laura had offered to the public jokingly, to have a word with the tyrant who had Marco hurt, she told him "Please, do not collapse - you are my friend, but I will have to continue to play music and act professionally!"

Exceptionally, the back story for Please Don't is not love gone wrong but the concern for her aging parents. The highlight this time again was the crowd favourite Delete. It simply does not wear out. Likewise, Time To Be Unkind felt so good and so familiar even though it's off the new album. Then Laura asked for requests and Butterfly and Minefields were the wishes of her worshipers in the audience. Spontaneously she therefore played Minefield and had to stop and settle because she had vocally exaggerated a bit. Nevertheless, the front row was full of praise: Cool! You know you sound like PJ Harvey?!

Slow Puncture also was great again and follows me on my many trails on the bike every now and then as a striking picture. When the air goes out so slowly, it does not have to just relate to romantic relationships. Unfortunately, due to the pre-planned schedule of the evening (Analog Pattern Robots were to follow in the bill) there only remained time for two more songs, namely Scared To Capsize and Paper Thin. But all the well what remains in our memory is an enchanting evening with the unique Laura Kidd and anticipation for October where she plans to stop by again:


It just feels v.special to be welcomed in to such a warm group of people. Excited to return again in October to see what they've done next!
— Laura Makes War (@warriorgrrl) May 9, 2015

She Makes War played Shields And Daggers, Olympian, Let This Be, Slow Down Sunshine, Please Don't, The Best, Delete, Time To Be Unkind, Minefields, In Cold Blood, Drown Me Out, Slow Puncture, Scared To Capsize and Paper Thin.


She Makes War's official site can be found here