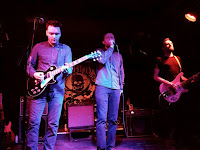 It's an extremely busy night in Manchester. We can't get along to see all of the bands we want to as there are so many time clashes across town but we hot foot it from a packed Albert Hall (where Ride delivered an extraordinary set to a packed crowd) to a packed Night and Day to catch local heroes and Even The Stars favourites The Slow Readers Club live up to expectations once again.

As the DJ spins some Northern Soul classics, The Slow Readers Club make their final adjustments to their kit, guitarist Kurtis Starkie finds time to dance along with Tainted Love and it's clear tonight the band are in a buoyant, confident mood. Start Again gets the show underway. One of the highlights from recent LP Cavalcade, it is a classic three minute pop song. The crowd love it. Early favourite Sirens sees the crowd singing along with vocalist Aaron on the chorus. Forever In Your Debt is delivered with a real ferocity and yet again is adored by the crowd. Don't Mind slows the pace down, showing how versatile the band are. They are currently delivering classic sets in the tradition of bands like The Smiths. Tonight is no exception with each and every song sounding like a smash hit.

The electro-tinged Plant The Seed gets the audience dancing before current single I Saw A Ghost leads to another singalong and a huge cheer as it ends.  Aaron thanks the crowd for coming along and the band always seem genuinely humbled by the support they receive. When asked who was at (the recent sell out) Academy gig, most folk cheer. The Slow Readers Club fanbase is a loyal one. Tonight's set demonstrates why, given their consistency in delivering sets crammed full of upbeat, thoughtful, intelligent pop songs. Set closer, Know The Day Will Come is a case in point. 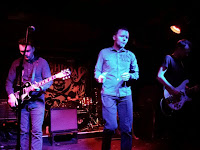 Unfortunately for the crowd, we are treated to only half an hour of their brilliance. Someone present even tweeted that it was criminal for them to play such a short set. Whilst we appreciate that what This Feeling nights do is brilliantly showcase local and emerging national talent, we feel that a band such as The Slow Readers Club, who are on the ascendency, be given more time to entertain their growing fan base.

The years of hard work and practice are clearly paying off now for The Slow Readers Club. Tonight's performance was a breeze. As a live unit, they are tighter and more confident than ever. They look like they own the stage with each and every song delivered with a passion from all four members of the band.

The Slow Readers Club played: Start Again, Sirens, Forever In Your Debt, Don't Mind, Plant The Seed, I Saw A Ghost, Feet On Fire and Know The Day Will Come.