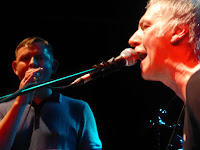 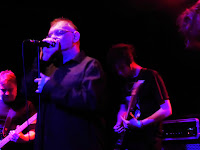 Ahead of their performance at this weekend's Gigantic Festival in Manchester, Inspiral Carpets announced two intimate warm-up shows. We caught the train across the Pennines to the best small venue in the world, The Trades Club in Hebden Bridge, to catch the first of them. The recently reformed Dub Sex took up the support slot honours to make it an extra-special evening.

It was 1988 the last time these two bands featured on the same bill, sadly the third band of the night, the manic, magnificent and majestic The Man From Del Monte haven't been tempted out of retirement yet, but there's plenty in the room who were probably there that night as well. 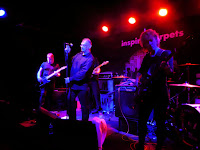 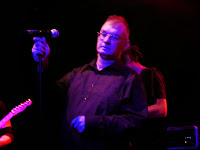 Dub Sex were always outsiders looking in on the Manchester scene through no fault of their own. Never seen as cool by the self-appointed Factory cognoscenti and certainly not by the Madchester hipsters of their day, they ploughed their own furrow with their angular, angst-ridden anthems for the disaffected, half-sung, half-barked by the enigmatic Mark Hoyle. His ability to let loose in his own inimitable fashion is restricted by space constraints on stage, but he still possesses that ability to unnerve both in his at times brutally honest and forceful delivery of the songs.

The new members of Dub Sex don't detract from the raw power of their music either. Cathy Brooks' bass lines in particular mean that they still possess that bundle of energy waiting to burst out of every song. The likes of Push, I'm Not Afraid and Instead Of Flowers haven't lost any of that raw power that made their shows such an exciting proposition back then. When they conclude with the duo of the enigmatic swirling Swerve that the shoe-gazing bands of the early 90s must have used has their template and the short sharp shock of Tripwire, the enigma is reinforced.

Coming on stage fashionably late, the Inspirals hit us first up with songs from both ends of their nearly thirty years of existence. You're So Good For Me, the song that first marked the return of Stephen Holt and their first recorded material for two decades when it emerged back in 2012, is sandwiched between two early classics Joe and Keep The Circle Around, both sung by Holt in his early days in the band on the Dung 4 tape and debut single. It's a (probably) unintentional statement of the timeless nature of this band. The two older songs have Clint Boon's signature keyboard flowing through the centre and neither would sound out of place on last year's triumphant self-titled comeback album. 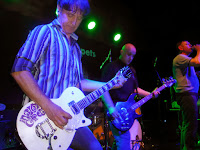 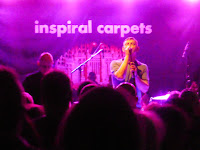 They clearly mean business as well. The band sound better than they've ever done, whether it be the often under-rated drumming of Craig Gill, whose given centre stage for the staccato ending of She Comes In The Fall from their biggest album Life, or the bass of Martyn Walsh, who seems at any moment liable to topple from the stage into the crowd or take someone's head off with the neck of his bass, such is the proximity of the band to the stage, or finally Graham Lambert, the unassuming guitar hero who often goes unnoticed such is the focus on Holt and the effervescent and ever charming Boon.

The set focuses on the highlights of last year's career high point album - the almost duet ode to love of A To Z Of My Heart, the classic Inspirals garage pop of Spitfire, the loping, John Cooper Clarke sampling epic Let Me Down and the uplifting Human Shield as well as the aforementioned You're So Good For Me - as well as fixing on Life and the singles that preceded it with a couple of later period greatest hits for good measure. They throw in the surprise of Further Away from The Beast Inside in the encore - it's curtailed from its fourteen minutes on the record to segue into the welcome return of Directing Traffic to the setlist, but it's testament to the fact that they're not just going to hammer out their hits. 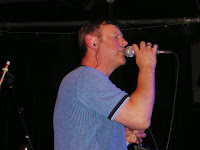 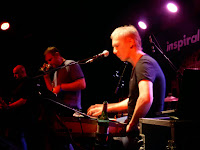 The audience, most of whom of a vintage to have been at that seminal gig at the International when these two bands last played together, love every minute of it, singing along to old and new, and one woman takes it to extremes, sauntering nonchalantly on to the stage at the start of She Comes In The Fall, dances for a bit and then steps back down into the crowd. Whilst they'll never hit the commercial peak they did back in their heyday, the mutual love and affection between band and audience is undiluted and possibly stronger than it's ever been. Inspiral Carpets manage to remind you of your youth even when they're playing their new material.

Inspiral Carpets played Joe, You're So Good For Me, Keep The Circle Around, This Is How It Feels, She Comes In The Fall, A To Z Of My Heart, Two Worlds Collide, Spitfire, I Want You, Sackville, Find Out Why, Caravan, Dragging Me Down, Let Me Down, Human Shield, Commercial Rain, Further Away, Directing Traffic and Saturn 5.