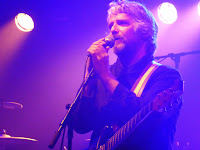 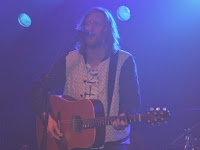 The last night of the I Am Kloot tour rolled into Liverpool’s O2 Academy accompanied by Andy Burrows.  We made the short journey up the East Lancs to catch a band at the top of their game – raw, loud and menacing but laden with a sense of dark humour prevailing throughout.

Andy Burrows opens up and having witnessed a few sets of his so far on this tour, our preconceptions based on his Razorlight past are well and truly binned. Opening with Frank Mills, from the musical Hair, he and his two bandmates create the tone for the rest of the set. It’s a relaxed set of songs, focused mainly on his previous solo LP Company rather than the more recent Fall Together Again.  He’s jovial throughout, engaging with his bandmates, teasing one about his rather impressive beard and the other about his lack of such hirsuteness and the audience including a couple of children perched on the barrier. He then proceeds to swear profusely before laughing it off. 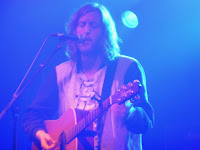 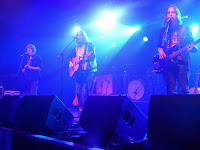 He also showcases Light The Night from The Snowman and The Snowdog soundtrack.  The set might be classed as what you’d call easy listening, but it’s certainly not boring as is usually implied by that tag. Melodies and harmonies take precedence over riffs and hooks and yet there’s no lack of emotion in the delivery, either from the guitars and mandolins of the band nor in his voice.


Kloot are what we’re all here for though. They’ve found the tape that holds their familiar intro music and John comes on earlier to try and conduct us into, we assume, singing it. They jump into One Man Brawl, from what we consider to be Kloot’s highpoint to date – the massively underrated 2008 album Play Moolah Rouge. It’s an album that’s back-to-basics recording approach is replicated in this live set-up – they’re returned to their roots as a three-piece and they focus most of their set on the period leading up to 2010’s breakthrough Sky At Night when they embraced further instruments and an augmented line-up. 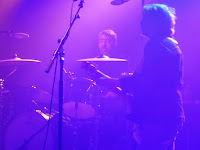 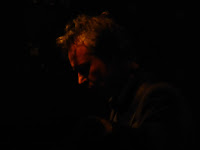 Rather than take anything from the sound, this more modest set-up augments it, the focus being shifted onto the interaction between Andy Hargreaves’ robust, rhythmic drumming that provides the skeletal framework for Pete Jobson’s bass, which, helped by expert use of the effects pedals, creates what sound like the most intense guitar parts in places.  Add into that mix John Bramwell’s mix of acoustic and electric guitar and Kloot create a wall of noise that is far greater than its component parts, steeped in the finest traditions of songwriting and indicative of the magic that the three of them can create together without the need for further sonic enhancements.

This is the big and bold, visceral rock music that so many fell in love with in the early days of the band and the recreation of tracks from their debut Natural History has an even harder edge to it than it did back then – Storm Warning, Dark Star, Twist and in particular the menacingly epic Because get an ecstatic reception from the crowd who relate to and sing back word perfect these tales of drinking and disaster, of a working-class outsider’s slightly twisted viewpoint on love and life. The love from audience to stage is clearly reciprocated when Bramwell dismissively rejects a shout from the crowd referring to the football rivalry between his host city and his home city. 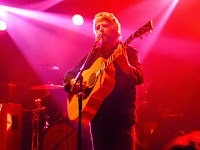 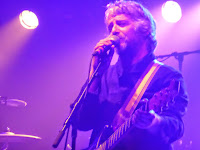 The set does cover their whole career, but is more heavily weighted to their earlier days, but there's little dissent from anyone who may have come along with Sky At Night or Let It All In, their two most commercially successful albums to date. The likes of Over My Shoulder, Dead Man's Cigarettes, Someone Like You and Cuckoo sit much more comfortably in this stark combative format with the amps turned up than some of the more tender fragile moments of those albums. However, in the acoustic section mid-set when Pete and Andy disappear for a cigarette, John strips At The Sea and I Still Do back to an acoustic guitar, showing that the quality of the songs stand up however the band choose to play them, and he even ad-libs an extra verse to the former.

It'll be interesting to see where I Am Kloot go next as it's been a couple of years since Let It All In. This tour has been an unparalleled success, the crowd reactions enthusiastic and displaying a great deal of love and affection towards the band despite a possibly unfamiliar setlist to some and the interaction between the band on stage is a joy to watch, particularly when John waltzes across stage during Masquerade and together he and Pete drop to their knees.  Kloot are at their best as a three-piece so let's hope that this continues.

I Am Kloot played One Man Brawl, Cuckoo, Life In A Day, This House Is Haunted, Gods And Monsters, The Same Deep Water As Me, Dead Man's Cigarettes, Someone Like You, Masquerade, At The Sea, I Still Do, Fingerprints, Over My Shoulder, To The Brink, Storm Warning, Here For The World, A Strange Arrangement Of Colour, Ferris Wheels, Because, Dark Star, Strange Without You, To You, Northern Skies, From Your Favourite Sky, Twist and Proof.

Email ThisBlogThis!Share to TwitterShare to FacebookShare to Pinterest
Labels: Andy Burrows, I Am Kloot