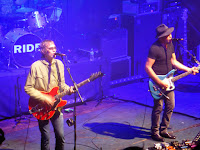 Ride's return to Manchester was one of the most anticipated gigs of the year. A band whose legend seemed to grow with every year they were away even amongst those too young to have been there first time round. We wiped away a dewy-eyed reminiscence and went to the Albert Hall to see if they could fulfill all those expectations and we weren't disappointed.

My own recollections of Ride first time round were two ridiculously loud gigs in Norwich in my first years at university, the second so loud that it left my hearing out of balance for days after, the one and only time that's happened. They were on the crest of a wave at that point, their first three EPs had built their reputation before they delivered the stunning debut Nowhere and followed it a year or so later with the widescreen Going Blank Again. I sort of drifted away from them, and you sense tonight others did too, after that as they continued with another couple of albums - Carnival Of Light and Tarantula - before breaking apart as a band and calling it a day. Mark Gardener forged a solo career whilst Andy Bell went off and formed Hurricane No 1 and then joined Oasis. 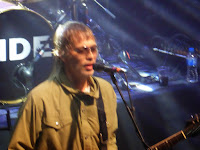 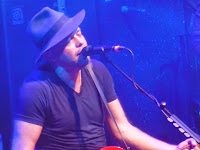 There's an expectant buzz around the majestic Albert Hall, light streaming in through the windows, as it gets closer to nine. And then there's a roar, a roar louder than I've probably ever heard at a gig as they come on stage. They start with the eight minute Leave It All Behind, their only top ten single, and downstairs is reduced to a mush of heaving bodies whilst people dance in the aisles upstairs. Immediately you're transported back to the days when Ride just wiped the floor with their peers with the sheer power of their music. Tonight isn't as loud as those halcyon days, but you're swept away on the wall of noise that they create, but rather than it being all-encompassing, you hear the beautiful subtleties in Steve Queralt's bass lines as well as marvel at the way Loz Colbert, one of the greatest drummers of his generations, constructs the framework for these monolithic songs.

It's a brave move opening with their only top ten hit and a song that wouldn't pass the three minute radio test today, but at the end the audience's response is even louder than when they came on. There's a lot of reliving of teenage years in here tonight, particularly as the set focuses heavily on the first two albums and the preceding EPs. Like A Daydream sounds as fresh and vibrant now as it ever did, the guitars of Gardener and Bell duel and pummel the audience into submission as the temperature in the hall reaches sauna-like levels whilst Polar Bear off Nowhere and Sennen, from the oft-forgotten Today Forever EP that separated the two albums, and the epic Cool Your Boots ensure there's no let up. Any fears that this might not match up to what people were hoping are completely dismissed, this more than exceeds what we were hoping for. 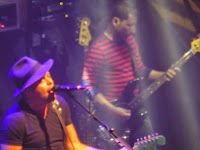 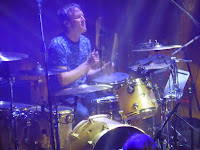 Things quieten down a little for Tarantula's Black Nite Crash and Carnival Of Light's Natural Grace as the masses downstairs pause for breath, but it allows a little reflection that those two albums probably need a reassessment in the cold light of day and knowing the tensions in the band behind their making which came out later. Whilst they don't have the raw energy of what's gone before it, which was predominantly forged in jam sessions, they stand tall and imposing above what's being sold to us as the guitar renaissance these days.

Natural order is restored with Twisterella, possibly the most commercial record they ever put out with its hedonistic rush of chiming, almost waltz-like, guitars and vocals which define the shoegaze movement that they were never really part of.  Every song from now on in is a reminder of their greatness though - Ox4 soars away and swirls around the ceiling of the hall whilst Dreams Burn Down and its unmistakable drum introduction and opening stratosphere-straddling guitar onslaught on the senses is a thing of true beauty, glacial aural peaks that sooth the soul yet set the pulses racing. 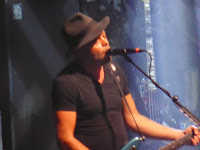 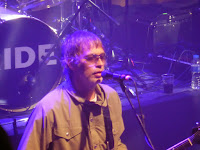 It doesn't feel like they're ever going to stop as well. Time Of Her Time, Chrome Waves and Paralysed follow and as Gardener and Bell interchange vocal responsibilities, it's impossible not to get caught up in the love and adoration in the room. Every song is greeted with a roar more deafening than the last. It feels like Taste is going to blow the roof off the hall such is the tidal wave of sheer volume it generates. They close the main set in a similar vein with Vapour Trail, where the audience sing along to the melody, and a version of Drive Blind that sets the hairs up on the back of your neck. They encore with Mouse Trap, Chelsea Girl and The Stooges' I Wanna Be Your Dog, a strange choice to conclude the evening.

Ride didn't just meet the expectations of the crowd tonight, they smashed them into a million pieces and rebuilt them. Unassuming, they don't say much to the crowd although Bell dedicates a song to Manchester and its musical heritage that influenced them as youngsters, they simply play songs that sound tracked the youth of those here paying homage to them. They play the songs people wanted to hear, they play them how people remember them and generate the same, if not matured with age, adoration as they did back then. This is guitar music at its most powerful, most transcendent. So many reputations are shattered by the desire to make a quick buck and not live up to the memories of the people who loved a band in their heyday. Ride are creating new memories as strong as the old ones with performances like this.