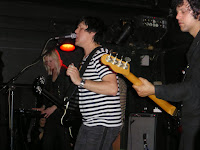 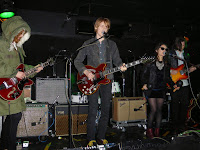 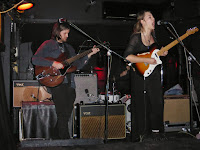 Suddenly, as it's about to close, The Roadhouse seems to be getting most of the great gigs in town. You can always rely on Interstellar Overdrive to put together a great bill and tonight is no exception as they've brought The Warlocks over from Los Angeles for a short UK tour and paired them with London's Black Market Karma and Manchester's own Enemies Eyes.

This is the third time we've seen Enemies Eyes in six months and we're still not aware of any recorded material since their major line-up change at the back end of last year, but tonight's set confirms the exceptionally positive impact they've had so far. They mix vocals between Aisling and Matt throughout their set, creating another dimension to their sound that few of the psyche acts with which they get classified can boast. It's Aisling's vocals in particular that impress, showing an impressive range that lifts the songs into the ethereal with an uplifting, buoyant almost haunting tint to them, countering the hard driven guitar, keys and drums onslaught of her bandmates exploding into a cacophony of noise. 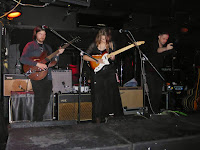 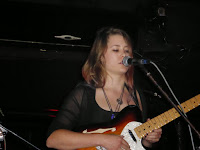 That's not to underplay the songs where Matt takes the lead, the six-song half hour set is full of peaks and no troughs. Underneath the onslaught of guitars, there's an exciting vibrant sound fighting its way through.  They don't say much, other than to introduce themselves before the last song and a comment half-way through about the election as they're tuning, but you feel they don't need to when they're letting the music do all the talking they need.

Next up are London's Black Market Karma, interestingly attired with two members of the band in shades and one of those wearing a parka with a hood up. We're not quite sure what to make of that before they start, but we needn't have worried. Right from the opening chiming guitars of the first song, they're strident, powerful and completely in control. 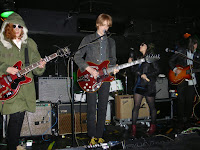 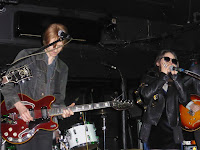 They make no concessions to the half-hour length of their set either, opening with a track that stretched to nine minutes, but it's indicative of their style, ambitious drawn-out epics with long fuzzed up sections, so much that they only manage five songs in a close to forty minutes, but none of the transfixed crowd are complaining. This is a band operating at the margins of psyche, making it their own, and, despite making little concession to accessibility in their approach, creating something that lovers of this sound cannot help but fall for.

The Roadhouse has filled out considerably by the time The Warlocks hit the stage and it's clear immediately that there's a lot of love flowing from the crowd to the LA-based six piece and the band reciprocate this, declaring their love for the Roadhouse early on as the best rock club in Manchester and that we need to "close this bitch down properly" and that's what they set about doing.

Their set is picked from their more accessible moments, opening with Shake The Dope Out and The Dope Feels Good from 2002's Phoenix and the even older Angry Demons from their debut self-titled EP and Caveman Rock from 2001's Rise And Fall before going back to Phoenix for Hurricane Heart Attack. Listening to these, it's hard to comprehend why they didn't hitch a ride on the wagon of love for this heartfelt full-on American rock that was rolling in the first half of the last decade. There's a love of the drugged out culture of the sixties prevalent in their sound, but also a nod to the likes of Spaceman 3 and The Jesus And Mary Chain. 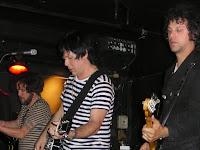 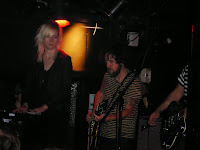 They do move forward for 2005's Come Save Us from their Surgery album before coming to three tracks off last year's Skull Worship album, Dead Generation, Chameleon and Hard Fall, showing that they haven't lost any of the ability to craft something true to their influences, but which retains an accessibility that keeps the crowd dancing and singing along as does Red Camera from The Mirror Explores. The set almost feels like a greatest hits set to clear the decks before embarking on new albums on their recent record deal.

They close their main set with the epic Jam Of The Witches which sees both band and audience lose themselves in the music as it spirals through its wandering phases to its conclusion.  They encore with the fuzzy haze of So Paranoid and conclude the evening with Cosmic Letdown, all brooding in its intro before leaving frontman Bobby to fight his way through a wall of feedback-hued guitar.

It's those guitars that make The Warlocks such an exciting live band. They're not afraid to indulge themselves and their audience in their rock and roll world where the guitar is king. Too many bands are afraid to trade in this, but when you've got a catalogue of songs as strong as the ones they play tonight, The Warlocks have no need to fear.