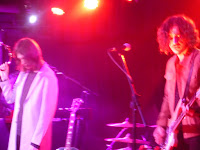 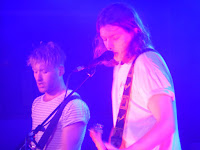 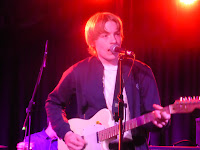 The inexorable rise of Blossoms continues apace. They're visibly growing before our eyes, turning all that raw promise and potential into something that promises to be truly special and they're taking their audience with them like the Pied Piper as they waltz through the venues of town. The Club Academy is packed to the rafters yet it already feels too small for them. Support was from Vant and Rory Wynne.

Rory Wynne opens proceedings and confirms the extremely positive impression of him (and his band, because there's three of them up on stage). His songs are short, spiky bursts of energy, but what's remarkable for one so young is the confidence that they're delivered. He knows how good he is, but does this without coming across as arrogant. 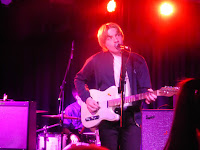 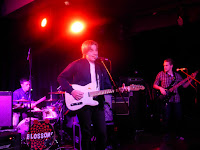 There will be Jake Bugg comparisons aplenty, but they'd be wide of the mark. The opening Post Party Confusion and Lock Me In The Wardrobe have enough lyrical and musical twists and turns in them to swiftly dismiss any such notions and in I Know She Knows and the closing Heart Of Stone, he's got two surefire singles which will raise his stock still further. He's one to keep a very close eye on because next year he'll be headlining places like this.

Next up are Vant, a band we know nothing about before they start. They're an interesting contradiction to what goes before and comes after. The London-based four-piece, named after front man Mattie Vant trade in loud blasts of rock propelled forward by a dual guitar and bass onslaught and a penchant for swearing. They don't take any prisoners along the way, they cram ten or so songs into their half an hour with debut single Parasite clocking in under two minutes and it's b-side Don't You Know Me equally forthright in its sonic assault on the audience. 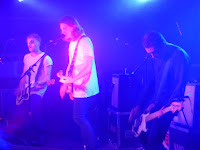 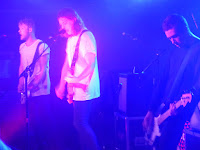 It isn't all brash bold swagger though. As well as the punk ethos that runs through the set, as it progresses there's also a sense of melody that permeates out from the songs that marks them down as more than hit and run merchants. They've been signed by Parlophone as well, which suggests that we're going to get used to seeing and hearing a lot more from them soon, which won't be a bad thing at all.

The room has been gradually filling up all evening and by the time Blossoms take to the stage, it's rammed right to the back. Immediately noticeable is that the crowd is made up of every age group from excited teenagers to fifty-somethings, all drawn in by the magic that Blossoms create. That demographic is testament to what Blossoms do that no other band is doing - they fuse a range of influences together to create something thoroughly modern yet classic sounding and they don't just do it once, they twist and turn so many styles into their own sound. 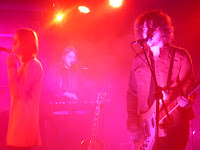 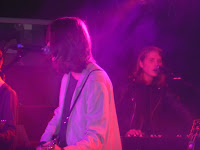 Take the opening trio of Lava, The Urge and Smoke for example. This is their more psychedelic side - big swirling keyboards, huge throbbing guitars, subtle backing vocals and front man Tom Ogden's ever more confident swagger - yet each song clearly defined with its own personality and character. It's impossible not to be drawn in by the infectious energy that they create, the sense these songs are so fluid that they are never played the same twice.

On The Beach At Night is the most recent addition to the Blossoms set and assures us that they're still creating great new songs despite their never-ending touring they've done for the last six months. It has all those aforementioned ingredients, but yet again mixed together in a different way. You Pulled A Gun On Me, a surefire hit single in the making once it gets a proper reissue at some point, has half the venue mouthing along to every word as the wistful dream-laden verses are ushered into the chorus by Joe Donovan's drum salvo and into the breakdown by Myles Kellock's keyboards which recall everything from The Doors to the The Charlatans early work. 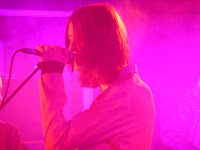 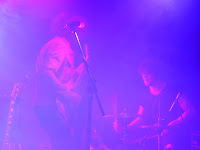 Next up is My Favourite Room, which sees Tom pick up an acoustic guitar. Beautifully stripped down it still bears all the hallmarks that Blossoms trade in - a intrinsic sense of melody, backing vocals that lift the songs in exactly the right places, a nod to their favourite bands (the Bunnymen in the breakdown). Cut Me And I'll Bleed has a new intro that makes you think they're going to burst into a new song, pulsating drums, building electronic effects before it drops down into its swirling keyboard signature line. A quick look around and there's people singing along, knowing every word, from the teenagers to those of us old enough to be their parents.

Next up is Blown Rose. We're running out of superlatives for this song. The video of it recorded at SXSW for Steve Lamacq's show has helped bring Blossoms a whole load of new fans and its forthcoming single release is sure to be the catalyst for the big October tour they've got planned to start selling out months in advance. Its beauty, its genius, is in its simplicity - a melody less complex than some of the songs around it in the set, but one that feels instantly recognisible without feeling like it's a copy of anything. The bloodied romanticism of the lyrics - "the stately homes of England, how beautiful they stand, lately it's a lonely love I know" - are so non-specific yet all-encompassing that it's impossible not to relate to it in some way.

Madeleine is one of their earliest songs and one that's sure to make the cut for the debut album. It's a measure of how much they're progressed as a band in twelve months that this song feels too big for this room when once it was being played to ten of us in Gullivers on an opening slot. As the song builds to its climax, Tom encourages the audience to clap along before Josh lets loose with a guitar solo that again points them in a different direction. 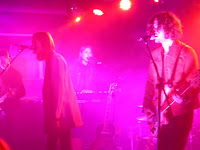 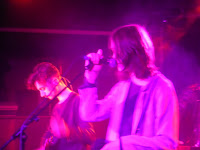 Inevitably, it's their debut single Blow that brings proceedings to close. Think I Am The Resurrection, Sproston Green and One Day Like This, songs that you couldn't imagine another finishing a set by a band. It has everything in it that has brought them this far and will take them further. Keyboards that swoop and soar and zig-zag furtively, big guitar hooks, a bass that drives the rhythm and drums that cajole the whole thing into shape. As it stops dead, the audience picks it up and sings it back to them before they all kick back in and let loose and bring the song and the set to its conclusion.

There's an excited buzz as the room empties and it's a buzz that's growing, reproducing itself exponentially with each and every gig they play and they seem to effortlessly make every single step up and there's plenty more to come. Look at how Catfish And The Bottlemen, who we love but don't come close to what Blossoms are creating musically, have gone from the Night And Day to two nights at the Apollo that have sold out in half an hour in the course of two years and that's the trajectory that Blossoms are on. We couldn't stop them now if we wanted to and soon they won't feel like they're our band or our secret, but it's a pleasure to see them enrapturing so many repeatedly. Get your tickets for October now before it's too late.