Track Of The Day : White Boy - Rock On 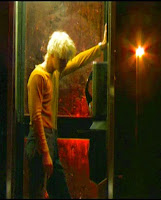 Manchester's White Boy release their second single today, it's a cover of David Essex's 1973 hit Rock On. Whilst we're not fans of covers, this is an exception as they've taken the original and put their own glam-rock mark all over it.

The follow-up to their debut Kiss And Run from the band fronted by former Janice Graham Band frontman Joe Jones, it's a precursor to their album Glitoris that's due out later this year. It opened the first of the only two dates they've played so far, a sold-out show at The Soup Kitchen back in February.

They've added extra drums, guitar and trumpet to the original to bring it right up to date and put their own indelible mark on it to the extent that musically it's effectively their own track loosely based around the original and the lyrics take on even more impact in their new surroundings.

Rock On is out today and is available on iTunes.